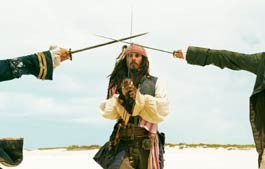 Steve Morales of Petaluma looks, acts and sounds uncannily like a pirate–even when he’s not reciting passages from the official and historically accurate “pirate’s code.” Right now, though, basking in the lingering postfilm glow of Pirates of the Caribbean: Dead Man’s Chest, reciting the pirate’s code is exactly what he’s doing.

“‘Article one: Every man has a vote in affairs of the moment,'” Morales half-barks and half-purrs in a voice so barnacle-tinged it might have been whipped up by the special-effects wizards at Disneyland. “‘Every man has equal entitlement to fresh provisions or strong liquors at any time and may use them at pleasure unless a scarcity make necessary

“The rest of the code,” he continues, “is basically a list of punishments for various infractions, dealing with everything from how many lashes would befall you should you be caught gambling on board–yeah, believe it or not, it was illegal to gamble for money while on board a pirate ship–to the punishment for attempting to smuggle a woman on board dressed as a boy, which was strictly disallowed, so I guess pirates tried that every now and then.”

“These rules,” I ask Morales, prompted by a now-famous line from the first Pirates of the Caribbean movie, “Were they the law, or were they more like . . . guidelines?”

“These were laws!” Morales laughs. “Make no mistake about that. You break the pirate code, and you will be punished.”

Morales, with his wife Anna Benincasa, is the co-owner of the Petaluma-based Pirate Mod, a wholesaler and retailer specializing in pirate-themed merchandise. He is also the director of the eccentric performance group the Seadogs, a maritime band and “nautical performance group” made up of about two dozen actors, musicians and singers who sing raucous sea shanties and generally carry on in a buccaneering way, and have been doing so for over 20 years. The Seadogs recently released their second CD, The Paddy West School of Seamanship, and are preparing to release a third, succinctly titled Everyone Loves Singing Pirates.

It’s as obvious as a screaming parrot that Morales and his pals have been looking forward to the new Pirates sequel, which features Johnny Depp, Keira Knightley and Orlando Bloom in a two-and-a-half hour spectacle of ships, swords, giant squids, swashbuckling heroics and Davy Jones recast as an octopus.

Though critics have dumped wet water all over Dead Man’s Chest, Morales is very high on the film, in spite of the numerous liberties it takes with pirate mythology.

“With this kind of film,” says Morales, “which is, of course, a fantasy, you have to sort of throw out any historical or literary knowledge you happen to have about piracy and the legends of the sea. You have to chuck what you know out the porthole and just enjoy the movie for what it is. The writers took a whole slew of nautical mythologies–Davy Jones, the Flying Dutchman, the kraken–and hacked them together in ways that have nothing to do with the original myths. They took a hodgepodge of old pirate mythology, and just wrote characters and a story around it.”

“Pirates just want to have fun right?” he says. “It’s a fun movie. Leave it alone, critics! This movie is critic-proof!”

It’s also good for business–if your business happens to be selling hats and hooks to people who love to play pirate. “Being a pirate is a good, healthy impulse, and I’m happy to help people act on that impulse,” he says. “Not that anybody would want to be a real pirate. Pirates were nasty, bloodthirsty, dirty, scurvy, burn-down-the-village kind of people. They were nothing but despicable crooks. But in spite of that, you can’t deny the fact that everybody looks great in a pirate costume. So there. Yarrrr!”