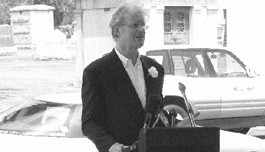 'Who Killed the Electric Car?' proves that no good idea for saving the planet goes unpunished

A mere sidebar compared to Al Gore’s story of global calamity, Who Killed the Electric Car? is a portrait of corporate blindness complemented by a spineless government and complacent consumers. Director Chris Paine follows the history of the California Air Resources Board’s (CARB) mandate to create zero-emissions vehicles. This ruling required car companies to manufacture an ever-increasing percentage of nonpolluting vehicles. (It was supposed to be 5 percent by 2001.) Thus, GM’s EV-1, among others, became available on a lease-only basis. Hollywood celebrities, with their unquenchable taste for new toys, were the first to get in on the act. Tom Hanks is seen in the early 1990s, boasting of his new ride on Letterman’s show.

Meanwhile, Astroturf (fake grassroots) organizations bemoaned the public placement of electrical charging units. And Mobil took out public-service advertisements worrying over the pollution caused by added electrical demand and the pollution caused by disposing of car batteries. Smell bullshit? You should. Although Bill Reinhert of Toyota is quoted as saying that electric cars just make for “a longer tailpipe” (i.e., power-plant smokestacks), the EV-1’s electrical usage was much less than the amount of oil a gas vehicle drinks.

Before the CARB’s mandate was finally canceled, automakers wriggled out of their responsibilities by making the application for electric-car leases bureaucratic. As Mel Gibson says here, he had to fill out a long résumé to explain who he, Mel Gibson, was in order to acquire an electric car.

After CARB’s mandate was withdrawn in 2003, and after federal tax credits were rejiggered to give bigger tax breaks to people buying Humvees, the electric car was toast. The saddest sequences show company tow-trucks parting interviewees from cars they wanted to keep. Despite requests to buy them, the various electric cars were scrapped on the grounds that they were uninsurable. This and other evidence doesn’t indicate that big automakers were ever seriously interested in marketing an electric car, despite the $1 billion GM claimed to have spent on the technology.

Still, this was the “good deed” GM’s corporate communicators call it. It’s true: Fear of an American electric car helped scare Toyota and Honda into creating hybrids. The problem today is that everyone from President Bush on up is sold on the elusive promise of hydrogen technology. What seems more practical is the 125-mpg plug-in hybrid now in development by Toyota and DaimlerChrysler.

The film is a little soft on the main problem of the electric car. No matter how sweet it was, its 80- to 90-mile range doomed it to be a second car. This is an L.A.-focused film, proven by the appearance of celebrities from Martin Sheen to Phyllis Diller. Unfortunately, my benighted hometown only recently started to figure out its commuting problems, compared to a number of Pacific Coast cities from Davis to Victoria, B.C., where nonpolluting vehicles cover shorter distances, just as an electric car would. The vehicles don’t run on fossil fuels or electricity. Rather they operate on a cheap, efficient mix of coffee and cerveza. They’re called “bicycles.”