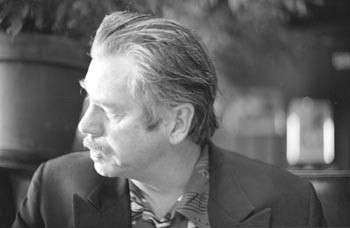 Dan Hicks gets a new lease on life

DAN HICKS is wearing a new hat he picked up in New Orleans. It’s a jaunty red yachting cap that gives the impression everything is clear sailing. But nothing in Hicks’ 30-year-plus career has ever been easy. At 58, he’s a surviving member of San Francisco’s ’60s music scene. Only a unique talent and sheer endurance have kept him around long after many of his peers have dropped out of sight.

“Sheer endurance,” Hicks repeats as he lounges in a booth at Marin Joe’s. “I like the sound of that. You know it’s a short list of people who were doing it back then, who are still doing it.”

Back then was the psychedelic ’60s and early ’70s. Hicks, a longtime Mill Valley resident who grew up in Santa Rosa in the ’50s and graduated from Montgomery High, got his start in the music business as a member of the colorful Charlatans, a proto-underground rock band. From there he founded Dan Hicks and the Hot Licks, a campy outfit that dished up quirky country swing-inflected tunes, and recorded a debut album of the same name in 1969.

That first record was quickly followed by 1971’s Where’s the Money? and 1973’s Last Train to Hicksville. That same year Hicks appeared on the cover of Rolling Stone and announced he was burnt out and planning a slow comeback.

“It was a sequence of events,” Hicks explains. “I broke up the Hot Licks, and then Warner Brothers sort of cleaned house and dropped me. I started the Acoustic Warriors, but the good companies didn’t know what to do with me, and the little companies didn’t have any money.”

Now Dan Hicks and the Hot Licks have returned with Beatin’ the Heat (Surfdog), their first studio album in over 25 years. It features the likes of Bette Midler, Rickie Lee Jones, Elvis Costello, and Tom Waits, all helping out on vintage Hicks’ tunes and arrangements.

Surfdog founder Dave Kaplan was 12 years old when he first saw Hicks on the Tonight Show. “I stayed up late one Friday night and saw this wild band,” Kaplan writes in the liner notes on the new album. “They played totally unique music and at the same time had a radical and dangerous edge.”

THE COOL of Dan Hicks has never been in question. With his slightly seedy, surfer boy good looks and hipster Mose Allison vibe, Hicks has always been an inventive performer and legendary writer of otherworldly tunes. But how did he get all those amazing people to agree to sing on his album?

“I made a list of some of my contemporaries,” Hicks says, “people I thought I’d sound good with. I wrote each of them a little letter. Tom Waits came first. Then I did “I Scare Myself” with Rickie Lee. Later I did the songs with Elvis and Bette.”

The result is an album that seems as fresh and exciting as when Dan Hicks and the Hot Licks first came to Sonoma County back in the late ’60s.

Nobody writes lyrics quite like Hicks. The man takes a James Joycean delight in language and wordplay that clearly sets him apart. Songs like “I’ve Got a Capo on My Brain” and “I Scare Myself” are timeless classics.

” ‘I Scare Myself’ was based on feelings I had,” Hicks says. “You know, it was sort of a love song, but I think I was just driving in the car, and I thought: ‘I scare myself.’ I don’t really want to talk about it or I’ll scare myself all over again.”

Hicks has cleaned up his notorious act of excess in recent years and says that, besides the few pounds he’d like to shed, he’s feeling pretty good.

Hicks says he has hundreds of tunes already written. At the moment writing anything new has taken a back seat to touring and promoting Beatin’ the Heat.

“I’m going on Conan O’Brien this month,” Hicks says. “Maybe I’ll wear this hat. You know, Count Basie had a hat like this. I’m happy that I can do this for a living. I just wish I was a little wealthier.”

Hicks is philosophical about his uphill career path, but also seems saddened that he doesn’t have more fame and fortune.

“I can’t be in a place where I expect it all right now,” Hicks says. “But I work harder than guys making 20 times as much as I do. My real priority has always been my music. I want to make a good sound. Something with an up attitude.”

Hicks is getting his fair share of packed houses and standing ovations on his tour across the country. And he’s selling more albums than ever before.

“I’ve gotten a great response,” he says. “You can’t really think about how many people are going to show up at the Mystic Theater to see you. You’ve got to think about putting on the best show you can.”

While all the Hot Licks and musicians are new in the band’s most recent incarnation‚ none of the old appeal has been lost. The sound is still a soaring ride of violins, guitars, and vocals.

“I’m taking my singing more seriously,” Hicks says. “Now that I’ve stopped drinking and drugging, I can depend on myself more on stage and in the studio.”

From the November 9-15, 2000 issue of Metro, Silicon Valley’s Weekly Newspaper.

© 2000 Metro Publishing Inc. MetroActive is affiliated with the Boulevards Network.