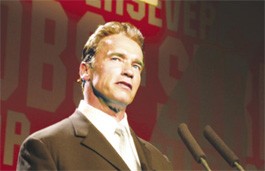 Cure for the Common Healthcare Crisis

Could the government have something for what ails us?

Photograph by Felipe Buitrago
They say the camera steals the soul . . .: Will Gov. Schwarzenegger consider an overall insurance bill that cuts out the insurance companies?

A World Health Organization comparative study released in 2000 found that the United States spends twice as much of its GDP on healthcare as any other country, yet is rated 37th in the world when it comes to the overall quality of medical care.

These troubling numbers made the systemic failings of our healthcare system a hot-button issue in last November’s midterm elections, and the issue is shaping up to be a central focus of the 2008 presidential election as well. In fact, the subject was to have been a focus of the presidential primary debate that was abruptly canceled earlier this month after a spat between the Democratic Party and Fox News.

The closing of emergency rooms, deterioration of U.S. business competitiveness in the international market and a sense of dread for uninsured citizens threatened with the constant specter of ever-increasing medical costs are fueling the fire of the healthcare debate throughout the nation.

Candidates in the 2008 presidential election may soon be pointing to California as the testing grounds for an alternative to our current health-care system based on private insurance plans. The results of this experiment will only be known, however, if California Senate Bill 840 (SB 840) passes through both houses, as it did last year, and is this time signed, not vetoed (as it was last year) by Gov. Arnold Schwarzenegger.

Senate Bill 840, sponsored by state Sen. Sheila Kuehl, proposes a radical reconfiguration of how Californians pay for healthcare. Instead of selecting an insurance plan from a multitude of options offered by privately owned insurers, every citizen would have an insurance plan administered by the state government. There would be one plan, and every California resident would have it. While there would be a new tax implemented to pay for the coverage and the universal healthcare agency that will distribute payments, supporters of the bill say the price tag would still be significantly less than what insured citizens pay for premiums, co-pays and deductibles now.

“Employers pay about 7 percent of payroll [under SB 840], compared to what they pay now if they are providing any plan, which is 10 or 11 percent, with no control of the fact that the prices rise every year,” Kuehl said in an interview from her office. “Individuals would pay about 3 1/2 to 4 percent of their income, which is a lot less than they pay now because they’re paying huge deductibles and there would be no deductibles or co-pays in this plan.”

Of the numerous healthcare fixes floating around Sacramento, SB 840 is by far the most extreme rejection of the current infrastructure. According to a Feb. 27 Los Angeles Times article, “The plan has retained its appeal because it would eliminate the least popular part of the healthcare industry: insurance companies.”

This may seem like a critical flaw for a bill introduced into a political environment where connections to insurance companies are not unheard of. However, that same L.A. Times article reports, “[Kuehl] is not including the taxes needed to put her bill into effect–$95 billion, according to the Lewin report–even if it were to be signed by the governor.”

Senate Bill 840 calls for money currently spent in county-run programs supporting the uninsured to be reallocated to a central pool that would also draw funding from the payroll tax revenue. The bill is far from being the only option on the table when it comes to healthcare reform, however. As problems within the health-insurance market continue to intensify, more and more politicians are designing fresh solutions they can slap their name onto. President Bush and Gov. Schwarzenegger have both floated different plans that would expand coverage to the uninsured through tax breaks and subsidies to individuals, while keeping the overall structure of the private insurance market intact.

Schwarzenegger proposes “an individual mandate to purchase health insurance” involving the extension of state-run programs and subsidies for low-income residents via a “purchasing pool” financed by noninsuring employers, federal reimbursements, a redirection of current spending on indigent care and hospital fees.

While the governor’s proposal would cover all Californians and therefore resolve the aforementioned crisis in emergency rooms by ensuring payments for hospital services, Sen. Kuehl is skeptical that it will offer the comprehensive coverage guaranteed under her bill. Senate Bill 840 would cover a long list of services ranging from eyeglasses and wheelchairs to mental health and adult daycare, options generally reserved for the more expensive private insurance plans.

“The governor is talking about very high deductible policies, up to $5,000 deductible, and up to $7,500 out of pocket,” she says, adding that anyone with an income over $9,000 a year would be legally required to purchase insurance under his proposal. “So between the bare bones policies you could buy to satisfy his mandate and the high deductibles, it would almost be like paying premiums but never being able to access your insurance.”