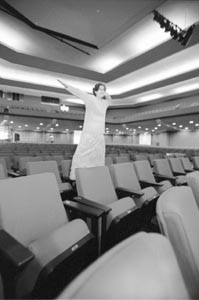 Ending on a high note: Executive director Claudia Haskel, who announced her resignation last month, has helped engineer dramatic changes at the LBC, designed to make the venue more competitive in a rapidly changing market.

THE CURTAINS ARE GOING UP at the Luther Burbank Center for the Performing Arts. Literally. A small cadre of workers mills around the wet-paint-scented main auditorium. Two jeans-clad men clamber up a metal ladder, reaching up to hang a brand-new heavy black backdrop across the back of the stage in the Ruth Finley Person Theater. A young guy with long blonde hair, wearing a rumpled T-shirt and shorts, tests the new spotlights, flipping them on and off, intermittently flooding the small stage with hot, eye-tearing illumination.

Are there any backstage jitters? Perhaps . . .

For nearly two decades now, the LBC has been a major hub of live entertainment and cultural activity in Sonoma County. Now the sprawling complex, once the home of the Christian Life Center church and located on a 52-acre site in north Santa Rosa, is undergoing a long-needed facelift–both physically and in terms of programming.

Indeed, what strikes you immediately is that the former seating–uncomfortable wooden church pews that lingered for years–is gone. In its place lie gently curving rows of thickly padded maroon fabric seats with armrests, enough to seat 1,560. The new color scheme of teal, maroon, and black gives the auditorium a classy but warm ambiance.

“It’s remarkable to see the transformation,” says the LBC’s executive director, Claudia Haskel. “It’s absolutely an image change. Walk in the theater and you’ll see immediately the image is no longer a church. It’s a stunning performing arts facility.”

The first phase of the LBC $883,000 facelift, completed last year, focused on upgrading the facility’s climate-control system, painting the exterior of building, and refurbishing the main lobby, all at a cost of $450,000.

In addition to replacing the pews, workers in recent weeks have recarpeted the interior, reconstructed areas to meet disability requirements, painted the interior, replaced the stage curtains, installed new spotlights, and resurfaced the parking lot–at a cost of another $433,000. The work is almost complete, and the LBC reopens Sept. 1 with a concert by irreverent comedian Sandra Bernhard.

Author Appearances: Noted contemporary writers are slated to swing through the North Bay in the coming months.

The remodeling is clearly happening at an opportune time, since the LBC is facing one of its biggest challenges since its inception in 1981–the impending loss of one of its most prestigious tenants. In two years, the Santa Rosa Symphony moves to a flashy new music hall on the Sonoma State University campus (see “High-Tech Hall” on page 19) in Rohnert Park.

But the physical improvements aren’t the only change at the performing arts center. The LBC, which is run by a nonprofit organization that relies on community funding, has also responded to the symphony’s move by boldly launching a new high-end subscription series with a focus on the cultural arts.

“The focus of the series is to present the best opera, classical music, theater, jazz, and literary artists available and to put that together in a subscription series to encourage people to explore and expand their musical and theatrical horizons,” explains Haskel, who says she has long dreamed of creating such a program. “We’ll continue to present popular entertainment,” she continues, “but we want to emphasize the growth of our cultural arts programming.”

In the past, the LBC’s programming department seemed to shy away from booking performances that clashed or competed with the Santa Rosa Symphony. That’s going to change.

“Most definitely” the Santa Rosa Symphony has been part of the cultural core of the LBC’s programming, but since the symphony is leaving the building, we’re beginning to book a stronger series of cultural programs through our own programming department,” Haskel says. “And our intention is to build the cultural programming up over time so that the subscription base is a sellout.”

Haskel also sees a way to cash in on the demographic changes currently taking place in the county. Wealthy professionals are moving north, attracted by the expansion of the telecom industry and other high-tech fields in Sonoma County and fleeing soaring housing costs in San Francisco and in Marin County. The LBC is betting that these newcomers haven’t lost their appetite for the finer cultural offerings to be found in big cities like San Francisco.

“A lot of people are relocating to Sonoma County and have a desire to attend performing arts programs here rather than in the city because of the traffic and their busy lives,” Haskel observes. “What we want to do is provide the same level of cultural programming in a more intimate setting with greater comfort and ease for our patrons.”

To that end, the LBC has also recently introduced a pre-performance dinner program, where patrons can, for between $35 and $45, dine on an in-house catered “theme” meal in the lobby. There is no restaurant on the LBC campus, although Haskel says she is open to the idea.

IT’S ALL VERY IMPRESSIVE–but can the LBC’s dramatic changes ensure the nonprofit’s viability in an increasingly competitive local entertainment market that offers audiences more choice than ever before?

LBC’s current main rivals, the Marin Center in Marin County and the Konocti Harbor Resort and Spa in Lake County, are giving the LBC a run for the money. The Marin Center, entirely funded by the county of Marin and now in its 29th season, continues to draw in the big names. Meanwhile, Konocti grabs many of the country-and-western headliners that were once a programming staple of the LBC.

“We’ve had competition from both of those venues from the early ’90s,” acknowledges Haskel.” Our programming has been directed to fill a niche that isn’t being replicated by programming elsewhere.”

Haskel says the LBC has dealt with competition by focusing on cultural program development, such as the Children’s Performing Arts Program which attracts approximately 35,000 children to the center each year.

“The latest surge of programming at the Marin Center is primarily rock,” Haskel adds. “We’re also focusing in that area now to bring in more rock acts, but really we’re a performing arts center. Konocti and Marin, the acts they’re booking are primarily acts from the ’70s and ’80s, and we’re focusing on current rock and the performing arts.”

As for the country music programming, Haskel explains that the LBC continues to book country acts, but that the music is sprinkled among some 10 other genres being covered by the center.

“If you pulled out the programming schedule for the year you’d see 12 country acts on it,” Haskel says. “Yes, some of the acts are going to Konocti, but we’re still doing our country programming. It’s just mixed in with everything else. Ten years ago the LBC was programming mostly country, so that’s what people were used to seeing.

“Konocti’s competition was stronger three years ago,” she continues. “It’s not something that’s on our minds.”

Haskel adds that most competition for rock acts comes from East Bay and South Bay amphitheaters that are double- and triple-billing shows.

JIM FARLEY, Marin Center manager since 1979, also downplays the competition between the main rival venues. “It appears to me that there’s more competition within Sonoma County than between Marin and Sonoma counties,” he says. “Our market is Marin and the Bay Area. We serve a different market and community, and often we book acts that aren’t in Sonoma County.”

According to Farley, the real competition lies in capturing patrons’ attention when they have a wealth of choices and more leisure time.

“I don’t worry about competition but about trying to best serve our community here, [staying] attuned to what the community is interested in, providing it, and also challenging audience tastes,” he explains. “Over time, things play themselves out, audiences and communities change. Our job is to stay in tune and serve them. Life goes on: the daily challenge to select the programming and present it.”

Still, Farley acknowledges that the LBC has blitzed Marin County with publicity for its new upcoming cultural arts subscription series. “It’s been very aggressive marketing here in Marin County,” he comments. “More aggressive than anything I’ve seen. It’ll be interesting to see if a lot of Marinites go.”

Haskel says that promos for the new “Wine Country Great Performances” series went out to Marin, Napa, and Mendocino counties. “Our primary target was the Highway 101 corridor,” she says, adding that 28 percent of the LBC’s audience comes from out of the county, up from 25 percent last year.

ALTHOUGH there have been numerous rumblings and rumors to the contrary, the Luther Burbank Memorial Foundation, the LBC’s governing board, has squelched any possibility of relocating the center to downtown Santa Rosa.

“We have 20 undeveloped acres, we have immediate access to Hwy. 101. There is no better location for expanded performing arts growth in the county than our facility, and our board recognizes that,” Haskel says. “We can park with ease on this property. We’re as accessible from Mendocino County as we are from San Francisco. It’s very difficult to get an audience of 2,000 people in and out of a location in a downtown area.”

In addition, the board has recently made public a master plan for the center that includes a hotel and a new theater. The 25-year plan, which was required by the county before it granting the LBC a sewer hookup, is an ambitious one. But Haskel can see it happening sooner rather than later.

“The likelihood of the hotel coming to fruition is probably in the next five years. The likelihood of a theater is in the next 10 years,” she says. “And the purpose of the new theater is to present traveling Broadway performances, fully staged ballets, more opera, and expanded seating to attract larger acts. It’s an exciting goal for Sonoma County and the North Bay.”

BUT HASKEL, who’s been at the LBC’s helm for the past six years, won’t be around to help further the facility’s transformation. She is heading for the exit door. She leaves her job in November to embark on other pursuits–such as obtaining her black belt in karate–and taking off for an extended trip abroad. Time will tell how the LBC will fare, but Haskel leaves on an optimistic note.

“We’re faced with challenges that are great. We’ve always been faced with challenges that are great, and they’ve always made us stronger and better, and I presume that’s what will happen with the transition that we’re going through now,” she says. “We’ve had our best box office sales this summer we’ve had in the last six years. The perspective we have is that it’s going to be our best year ever.

“If you take one walk in the theater, you’ll see what I mean,” she concludes. “It’s the unveiling of a whole new phase of life for the LBC.”