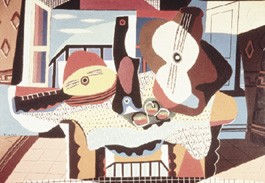 A hungry woman, a bare cupboard and a mysterious tin of Spanish paprika

Every few months, I, like many of my fellow foodies, hit a wall: I have no idea what to make for dinner. Normally, I am positively giddy by all of the recipes I want to try. And usually, I treat making dinner as if I’m in my own solo version of Iron Chef. (“And tonight’s secret ingredient is”–scour fridge–“Brussels sprouts! Allez cuisine!”) But one night not too long ago, I stood in my kitchen, unable to muster any gustatory verve. I felt completely bereft of inspiration. I opened my spice cabinet and stared hopefully at the unorganized jars. And then I saw it. A little squat tin of Spanish paprika.

Spanish paprika? Wait. Slight disconnect. I thought paprika was Hungarian? I wasn’t interested in making goulash (because, at that point, to me paprika was synonymous with Hungarian food), and the only other thing I knew about paprika was that it provides color, not only to many processed foods where it is one of the “natural food colorings,” but also to platters of deviled eggs throughout the country. Without dismissing its role as a color additive and a flavor key to goulash, paprika has never made the top of my spice list. In truth, I thought of it as flavorless. Nonetheless, I was drawn to this beautiful brick-red tin.

Reading the label, I realized that I had in my hand a serious spice. While the pimentón pepper (Capiscum annuum) can be grown in many places, those grown in the Vera area of Spain’s Extremadura region are in a class all their own. What distinguishes Spanish paprika from Hungarian paprika or other powders made from dried peppers is not only the peppers themselves, but also the production process. It comes in three varieties, the most common being the sweet (dulce) as well as the bittersweet (agridulce) or the hot (picante); choosing either of the latter two adds yet another layer of flavor.

Spanish paprika results from pimentón that have been smoked slowly over oak and hand-turned for 10 to 15 days. Pimentón “de la Vera” are the first to have received the coveted “Denominación de Origen” stamp. Only a dozen or so producers in the area have been awarded use of this stamp. When I see that the provenance of a product is inextricably linked with the product itself–like prosciutto di Parma, jamon de Serrano or Champagne–I believe good things are in store for my palate. I was not wrong about the paprika.

I broke the paper seal and pried open the lid of the tin, which made me feel as if I was gaining access to a secret prize–ironic, because Spanish paprika has now become the secret weapon in my spice arsenal. Immediately, I was hit with a sweet, dusky yet piquant smell. It was like inhaling some good Southern barbecue.

I remembered that, while I hadn’t cooked with Spanish paprika before, I had certainly tasted it in two foods I adore: paella and chorizo. Oh, and how could I forget my addiction to a certain Napa Valley restaurant’s dish of mussels steamed in a romesco-style broth, anchored by cumin and Spanish paprika! Mmmm. Spanish paprika would lend both the pepper’s vegetal sweetness and the oak’s smokiness to whatever I made. Instantly, my cook’s block had been removed. Now I was thinking, “I could make a million great things with this!”

I foraged around my kitchen and found a pound of medium-sized frozen shrimp, shells on. Remembering how good those mussels were, I realized I had the perfect match for the spice: seafood. After thawing the shrimp, I set about figuring out the other flavors I would add to my dish. I looked for spices and herbs that share a part of Spanish paprika’s flavor profile and that can also stand up to it. Spanish paprika can overwhelm more delicate flavors and wines. I decided on cumin for its muskiness, fresh coriander and lemon for their brightness, and garlic and onion for their sweetness.

After slicing half of a large sweet onion, two large cloves of garlic and a whole lemon, I heated some olive oil in a large skillet on high. When the oil was hot, I added about a teaspoon each of ground cumin and hot Spanish paprika (you could also use the sweet variety, adding about a teaspoon of cayenne). When the spices began to color, I added the slices of onion, lemon and garlic. Stirring the spices and garlic so they wouldn’t burn, I then added the shell-on shrimp, which had been patted dry. (If the shrimp are too wet, they end up steaming and making a sauce, which is another way to make this dish.)

I thoroughly coated the shrimp in the spice/olive oil mixture as I cooked them, being careful not to burn the pan or spices. I seasoned liberally with salt and, when the shrimp had turned opaque on both sides, turned them out onto a platter.

I have to say the dish was beautiful; the orange-pink shrimp wore a luscious red coating of paprika and the still-yellow rinds of the cooked lemon slices made it sunset on a plate. To offset the spiciness of the dish, I put some crème fraîche, a handful of coriander leaves and some chopped scallions into the blender to make a wonderfully cooling dipping sauce.

My paprika peel-and-eat shrimp has now become one of the most requested dishes in my roster. And it was inspired by that little tin of Spanish paprika. I use it all the time now; luckily, a little goes a long way. I mix it with oregano and olive oil to create a barbecue rub for salmon. I add it to virtually all of my vegetarian stews, because it gives them the heft that something like bacon would normally add, but without adding meat.

To think, for only $2.99–the cost of a four-and-a-half-ounce tin–I found culinary salvation.