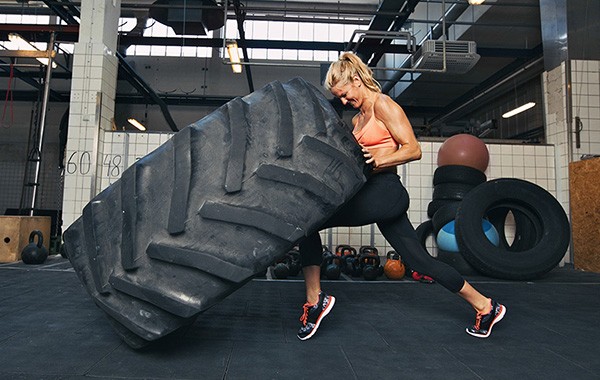 CrossFit's defenders and critics square off

You’d be hard pressed to find an article—outside one written by a CrossFit enthusiast—that reviews this exercise phenomenon without asking some real tough questions about its safety, effectiveness, cost and even the philosophy behind it.

Shouldn’t all products, whether good or bad, be held up to such scrutiny? Maybe General Motors, Comcast and Apple grudgingly accept this, but CrossFit—both the corporation and its acolytes—can’t seem to take criticism in stride. And there’s been a lot of it going around lately.

The New York Times Magazine was the latest publication to take issue with CrossFit and other extreme fitness programs, likening them to nothing more than labor camps you pay a king’s ransom to join. “Why not join a roofing crew for a few hours instead? Surely there’s a tunnel somewhere that needs digging,” sniffs Times columnist Heather Havrilesky.

In response, commenters, many of them CrossFitters, swarmed the online version of the article, posting more than 800 messages. Many were sharply critical of Havrilesky’s assessment of the workout routines.

The Times article is only one in a recent wave of brickbats hurled at the sports-fitness brand, which now boasts an estimated 10,000 affiliates. Its critics are as diverse as medical researchers, fitness organizations, sportswriters and social commentators. They’ve all found a bone to pick with CrossFit, and, no, they’re not joining them for a Paleo diet dinner.

Critics and online commenters have likened CrossFit to a cult, insinuating that it’s not much more than a paramilitary, post-apocalyptic wet dream. They’re fitness preppers ready to take on whatever catastrophe awaits mankind.

CrossFit’s own website hints at this on its “What is CrossFit?” page: “We have sought to build a program that will best prepare trainees for any physical contingency—not only for the unknown, but for the unknowable.”

CrossFit’s founder, Greg Glassman, takes the rhetoric a step further in his CrossFit newsletter, stating “nature, combat and emergency can demand high volumes of work performed quickly for success or for survival.”

THE GOSPEL OF CROSSFIT

In her Times Magazine article, Havrilesky describes the austere and formidable environment of the typical CrossFit gym:

“Those stunned by CrossFit’s growing popularity are often surprised, given its high price, to discover its spartan ethos: Each ‘box’ (its lingo for gym) is often just a big empty room with medicine balls, barbells and wooden boxes stacked along the walls. Workouts rotate daily but tend to involve free weights, sprints and enough squats to cripple Charles Atlas. In keeping with its apocalyptic mission statement, the program encourages camaraderie under duress (CrossFitters coach each other through the pain) and competition (names and scores are scrawled on a wipe board and sometimes posted online).”

A former certified fitness instructor and CrossFit participant, who wished not to be identified for this article, said much of the atmosphere she witnessed seem contrived, right down to the grungy workout gear worn by instructors and long-time CrossFitters.

The CrossFit workout is like Navy SEAL physical training taken to an extreme. It’s group exercise, done in classes where the workout itself is a competition. There are typically time trials where participants strive to perform the exercises faster than their workout companions.

“The warmup is usually inadequate. It could be jogging around a little bit in the parking lot followed by a little dynamic stretching, which can cause injury by itself,” says the former fitness instructor, describing a CrossFit gym she attended.

“Good CrossFit instructors,” she said, “will assist in picking appropriate weights for members, but the competitive nature can result in amateurs pushing themselves too far.”

However, the fitness instructor said the CrossFit regimen does have some redeeming qualities. “It’s a good workout,” she says. “The competitive atmosphere makes it fun and motivating. It encourages people to push themselves, but for some it can be too much.”

CrossFit does not take kindly to criticisms about its workout regimen. Recently, it sued the National Strength and Conditioning Association (NSCA) for publishing a study by Ohio State University researchers led by Steven Devor, an exercise physiology professor.

In the Journal of Strength and Conditioning Research, the Ohio State researchers said that while there were some notably positive results obtained from CrossFit exercises, it hinted that injuries could possibly be an issue.

“Of the 11 subjects who dropped out of the training program [out of 54], two cited time concerns with the remaining nine subjects (16 percent of total recruited subjects) cited overuse or injury for failing to complete the program and finish follow up testing.”

While the study was very complimentary overall (some even likened it to pure advertising), it touched a raw nerve with CrossFit, which complained that the research was “at best the result of sloppy and scientifically unreliable work, and at worst a complete fabrication.”

In response to the study, CrossFit says it sought out the research participants who said they didn’t complete it because of injury and overuse. CrossFit claims that when they contacted the participants, they denied failing to finish due to injuries. CrossFit claimed the researchers were guilty of dropping the ball in following up with them.

In its lawsuit against NSCA and the research team, CrossFit further maintains that the fitness organization, which is one of several groups that certify fitness professionals, was going after the company because it certifies its own instructors. The NSCA, it claimed in the lawsuit, had a vested interest in discrediting CrossFit.

This is a brand that seems highly motivated in protecting its reputation. Media opinion that is deemed hostile to CrossFit is often met head on, and aggressively.

The people who participate in CrossFit happily call it a “cult,” says Ryan Parker, co-owner and head coach at CrossFit NorthGate in Santa Rosa. “There are a lot of people who call CrossFit a cult when they’re on the outside looking in, and when they are on the inside looking out.”

CrossFit participants, he says, “are proud of the cult. And that speaks to the experience people have in a CrossFit gym. It’s a supportive environment of people pursuing health and fitness, and sharing the experience.”

Parker argues that the camaraderie, which can be expressed as competitiveness, “helps people to be really consistent with it over time.”

Parker acknowledges that given an emphasis on competitiveness, the risk of injury in CrossFit is “absolutely a valid concern. In this environment, people can overextend themselves.”

But, he says, that’s why there are coaches and trainers on-hand to make sure CrossFitters don’t hurt themselves. He blames a lot of recent online depictions of CrossFit training for the misperception. Those videos, he says, emphasizes the intensity of the workout over proper form and mechanics, which is how you don’t get hurt.

In December 2013, Outside magazine published an article called “Is CrossFit Killing Us?” It cited the findings of the Ohio State University study and maintained that the competitive nature of the workouts could result in a slew of injuries, from slipped disks to torn rotator cuffs and even more serious conditions such as rhabdomyolysis, a potentially fatal condition in which muscle tissue breaks down and is released into the bloodstream.

CrossFit’s acolytes attacked the credibility of the writer, Outside and Steven Devor. Writer Warren Cornwall responded to the jousts in a follow-up article, “Crossing Swords with CrossFit,” in which he wrote about his experience as a target of the wrath of the workout’s legions.

“The CrossFit community went berserk. While many commenters chimed in about their own injuries from workouts, many more criticized both the statistic and the study itself. Lengthy rebuttals appeared in CrossFit Journal—the organization’s newsletter. One of CrossFit’s chief PR people, Russell Berger, rang up the study director, professor Steven Devor, and grilled him until the scientist refused to talk to him any more. The upshot was a collective pile-on attempting to discredit the study, its directors—and Outside—while spinning public opinion away from the idea that the insanely popular workout program was any more hazardous than jogging in your neighborhood.

“And yet no one was making up the stories about people getting hurt. So what was the deal? Was CrossFit inherently dangerous? And if so, were the hordes of newbies with beach-body dreams flocking to CrossFit ‘boxes’ aware of the risks?”

Devor told Outside that the 16 percent figure in the Ohio State study is a soft number and never intended to represent global injury rates, and he says CrossFit’s ambush on the study is misguided. “It’s a fricking paragraph in the paper,” said Devor. “There’s no way I will ever do research with that workout again. It’s just not worth it.”

Cornwall continued to fire back in his follow-up article, stating that it’s understood there is no conclusive data to define injury rates from CrossFit, yet. However, he went on to cite several surveys and other notable sources to help readers make their own judgments about CrossFit’s safety.

CrossFit’s reputation took another unfortunate—and perhaps undeserved—hit when one of its top competitors, Kevin Ogar, severely injured himself during a major CrossFit-style competition in California earlier this year. Ogar was paralyzed from the waist down after he could no longer hold a bar carrying weights over his head during a “snatch” lift and let them plummet to the ground. The barbell then hit Ogar in the back, severing his spine.

While Ogar’s injury is arguably a freak accident that could happen to anybody performing the lift, CrossFitter or not, the tragic event did not help CrossFit’s dubious reputation with the media, as websites such as Deadspin, Buzzfeed and Gawker jumped on the story, prompting CrossFit critics to take to their message boards to question whether the fitness craze was to blame for the accident.

The judgment of whether CrossFit is a beneficial and viable workout is not for this writer to make. Former and current CrossFitters who spoke to us and even the Ohio State study indicate that this high-intensity training has many benefits. Clearly, the rigorous debate over its merits and demerits is being held in the public forum, and kinesiologists will likely weigh in on it someday soon.

The bigger problem is CrossFit’s reputation, a creation of its innate aggressiveness and hive survival instinct. It has spilled over as combative rhetoric directed toward the world outside its “boxes.” This is a movement that’s past due for an image makeover and perhaps some contemplative meditation.

This story originally appeared on Alternet.com. Tom Gogola contributed reporting to the article.