It's asparagus season, so why is there so little of it? 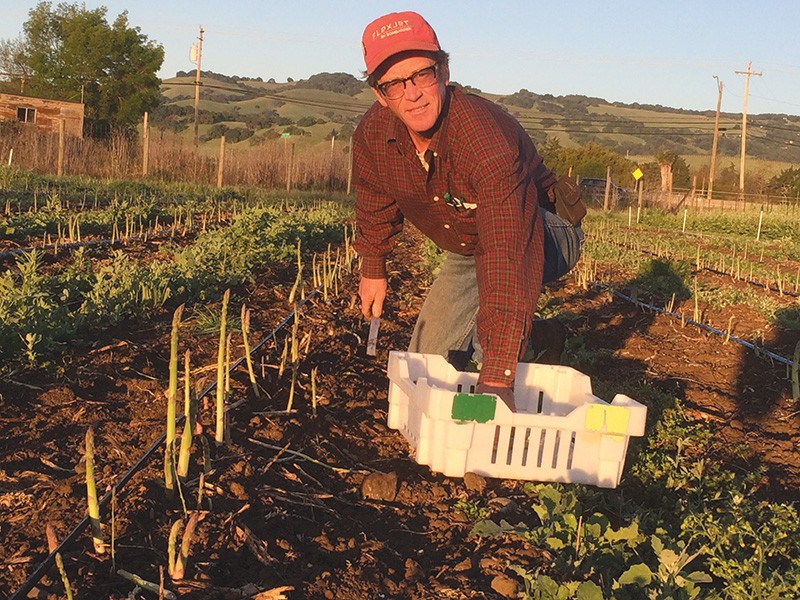 It’s asparagus season in Sonoma County, but outside of a few farm markets, it’s hard to find it though local sources. Why is that?

Unlike lettuce or tomatoes, perennials live for several years. The majority of farmers in Sonoma County are leasing their land. Most are pushing the limits, taking life one day at a time. In order to pay their bills, it usually makes more financial sense to grow annual crops, ones that provide multiple harvests and revenue streams each year. The thought of dedicating new ground to establishing perennials, which may not have a sellable harvest for the first two to three years, is daunting.

Paul Wirtz, farmer and owner of Paul’s Produce in Sonoma, is a bit different. Paul (pictured) has been tending land in Sonoma Valley since the 1980s and is entering his 28th season of growing beautiful, chemical-free produce, including asparagus. His is a great example of a small (less than 20 acres) family-owned farm on leased land.

The fact that Paul has asparagus is the result of several factors: his farm has a quarter-acre, triangular shaped piece of land that was underutilized; he planted a diversity of crops that allowed him to wait the initial two-three years for the asparagus to start producing; and he had a desire for a late winter/early spring revenue stream.

Because of these factors, Paul is something of an anomaly. The big question for North Bay farmers is whether they have the confidence that the land they are committing to longer-term projects will be around for them to reap the rewards. Bigger still is the question of how to get more farmers to diversify their crops and own their land.

Tim Page is a co-founder of f.e.e.d. Sonoma, a micro-regional produce distributor in Sebastopol. For more info,
visit feedsonoma.com.

Next ArticleApr. 19: Past & Present in Mill Valley