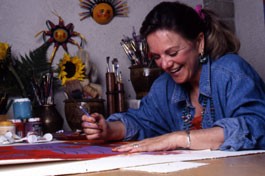 Whether depicted in brightly harmonious jewel tones or the rich softness of ancient earthen hues, the mystical creatures and fanciful figures created by designer Laurel Burch are infused with both wisdom and joy. Their creative energy bursts forth from jewelry, posters, coffee cups, scarves, tote bags, T-shirts, sweat shirts, writing journals, note cards, fabric swatches and more. Within their two-dimensional reality, they sing and dance a vibrant celebration of love and of life. And in that sense, they move and speak in ways their creator no longer can.

Burch was born with osteopetrosis, a rare congenital condition that makes her bones incredibly brittle; the slightest impact causes them to break. Many people with osteopetrosis don’t survive childhood. Having celebrated her 60th birthday at the end of December, Burch has long since beaten those odds. Once a self-described “hippie-dippie” single mother living in San Francisco’s Haight-Ashbury district, she raised her two children while crafting a creative career as a self-styled “folk artist” that’s now in its 40th year.

“I can’t control that I have a bone disease, but I can control the way I live with it,” Burch explains in a video produced by her 41-year-old daughter.

Her mass-produced designs are inspired by her paintings, many of which she creates while lying in bed. In the last few years, Burch has had to reconcile herself to life in a wheelchair. At one point. her right arm was broken, so she supported it with her left, then learned to paint left-handed. When she couldn’t hold the brushes, she painted with her fingers. Now her jawbone is broken and is not healing. She can only talk for a short time before it becomes too painful to continue.

“I discovered where my wings were through losing the use of my legs, so it was a huge gift in that regard,” Burch says. With a laugh she adds, “It never occurred to me that I might lose my mouth and that I might have difficulty speaking. So now I’m thinking, ‘OK smarty-pants, what if you can’t say anything?'”

Clearly someone who loves to chat, Burch is trying to learn to use fewer spoken words and to let her creations talk for her. “I really began my art as a language because I was so much living in the inner parts of myself,” she says. “I wanted to share what I saw.”

What she saw was a bright, colorful and magical world imbued with a certain air of mystery but also a great deal of hope–images which have struck a chord with consumers for the past 40 years. Even folks who don’t necessarily know Burch’s name usually recognize her fantastic cats, birds, moons, hearts and other images, which became cultural icons in the 1970s and 1980s. There was a time when the highly distinctive Laurel Burch jewelry, coffee mugs and assorted items were absolutely everywhere. Still popular, her work has evolved over the years to include a range of colors and themes, from tribal images to mythical beings and beasts–all of it evoking a sense of harmony and happiness.

“It’s not about decorating the surface of people, but creating something that people can either give to someone they love or that really means something. It’s not just a bauble,” Burch says.

Recently, she and her husband, Richard Sara, consolidated the contents of several North Bay storage spaces into one 2,000-square-foot warehouse. “For the first time in 40 years, I saw all of my life’s work,” Burch recalls. Her husband kept having to bring in more tables, so they could lay everything out and look at it. The pieces ranged from her early hand-pounded bead-and-wire jewelry to sketches on napkins to large acrylic paintings.

“There are thousands, literally, of drawings, paintings, designs,” Burch explains. “It goes on and on. I didn’t know the scope of it myself. I was blown away. After we laid them out, I got so excited to remember all of this, even though, of course, it’s in my soul. I thought, ‘Wouldn’t it be amazing if I could share this with everybody?'”

Gazing at the accumulation of her work, she conceived of the idea of a Laurel Burch museum and scholarship fund. “I thought, ‘Wouldn’t it be great to have a nomadic museum, a museum that really could go to all different countries and all different places, so I could take it to people rather than them having to come to California. And when the time feels right, it can come back and be housed.’ Each show that takes place will be part of the funding for creating a permanent museum.” The money raised will also pay for art school scholarships. Although Burch herself is entirely self-taught, over the years she has helped raise money to provide training for a number of aspiring artists. The museum project will expand that effort.

Burch’s first retrospective exhibit was held April 13-15 at Fort Mason Center in San Francisco. Walking through this portion of the “nomadic museum” is a stroll through Burch’s adult life, starting with the early days when she bought rusty wire from a junk shop, cleaned it with olive oil, pounded it flat using a hammer and a frying pan she bought in a thrift store, and then strung it with antique beads. On a tight budget, she paid $5 for a second-hand dress, then wore it and one of her necklaces into a fancy San Francisco boutique. The owner was curious to know where Burch got the necklace, giving her the first of many outlets for her wares. Her metal creations grew, incorporating many more beads, as well as bones, leather and fabric until eventually she also began creating one-of-a-kind dresses and other items.

The historical “trail” through the retrospective exhibit moves on to photos and artifacts from her visits to China in the early 1970s, when she worked with enamel and cloisonné artisans to reproduce her designs. From there, the path leads past her early pictures and drawings, and on to images created over the years, from the bright fantastical feline images from the 1980s to the more recent “tribal cat” paintings. Burch’s palette ranges from earth tones for mythical horses and echoes of ancient images, to a jeweled rainbow of colors for series such as Spirit of Womankind, Ocean Songs, Mythical Menagerie and Art of Human Being.

Connie Beech of San Jose bought her first Laurel Burch earrings in 1974, and remains an ardent fan. She made a special trek to San Francisco to see the retrospective show. “I’m interested in the kind of spiritual energy around her work. I feel like she’s a spiritual being,” Beech says of Burch. “She’s from out there, somewhere, coming in with all this beauty. I think as the years go on, she will be regarded as another Frieda Kahlo or Georgia O’Keeffe.”

Nika Stassman of Marin County, also a Burch fan who made a point of attending the retrospective show, has a different comparison in mind. “She’s the Picasso of the United States, as far as I’m concerned. There’s something very universal about what she does.”

In addition to doing pen and ink drawings, Burch paints with acrylics on heavy watercolor paper. “Everything is tougher and tougher for her, but she keeps doing it,” says husband Sara. “It’s often very painful, but she keeps going.”

For years, Burch had a gallery in Sausalito, but her health forced her to close it. Now the couple live quietly in their home in Novato, where she continues her work. A white piece of paper is always intimidating for a moment or two, Burch says, and then the feeling passes and she plunges eagerly into the act of creation.

“It’s not the process that I love; that really doesn’t matter. What I get excited about is sitting down and having my whole being just bursting with wanting to express the beauty I want to share.”

For a long time she didn’t include words in her paintings, because she wanted the meaning to be up to the viewer. But one of her recent pieces includes the words of a Native American proverb: “The soul would have no rainbow if the eyes had no tears.”

“Because I’ve been through so much physically with my disease in the last several years, I’m probably closer to that poem than anything right now,” Burch explains. “Having said that, the joy is also more huge and deeper and more prolific than any I’ve ever felt, as well. That’s the good news.”