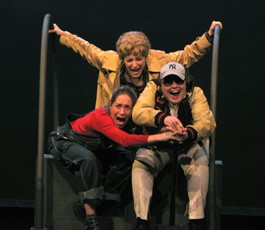 PASCO's 'Wonder of the World' a whimsical plunge into weirdness

Before playwright David Lindsay-Abaire got into the Pulitzer-winning business with 2006’s achingly grounded, Tony-nominated Rabbit Hole, a stunning look into the lives of a family following the death of a child, the Boston-born writer made a very different name for himself writing unhinged, experimental comedies peopled with teenagers afflicted with rapid-aging diseases, amnesiac housewives, foul-mouthed sock puppets, phantom schoolgirls and other cartoonishly off-kilter oddballs who resemble everyday human beings only in peripheral, symbolic ways. In plays like Kimberly Akimbo, Fuddy Meers and Snow Angel, Abaire built a reputation on his whimsically sick and twisted imagination and his talent for inventing situations and spinning dialogue that are both funny-weird and funny-sad at the same time.

As a playwright, Abaire tends to write in broad strokes, with Rabbit Hole standing at one end as the least broadly drawn of his works, and with 2000’s Wonder of the World, which just opened a three-week run at Spreckels Performing Arts Center, standing at the opposite pole, a prime example of Abaire at his broadest, wildest and weirdest—and least convincingly human.

That said, this production by Pacific Alliance Stage Company, directed with obvious delight and fun, visual flair by Hector Correa, makes up for the play’s lack of depth and penetrating insight by emphasizing its outrageousness.

Cass (Alexandra Matthew) is a young married woman who discovers something shocking in her husband Kip’s sweater drawer (there’s no way you’ll guess what it is, it’s so astonishingly weird). She is accordingly shocked into a state of manic energy in which she seems to have lost all sense of tact, decorum or sensitivity. Armed with a long bucket list of things she hopes to accomplish before she dies, she is packing to leave when Kip (Michael Barr), befuddled and prone to tears, suddenly comes home for lunch. After imploring him to stand in the corner out of the way while she packs, she tells him, “I think I made a mistake.” When he wants to know when, she replies, “Remember that time you proposed—and I said yes?” And with that, she’s off to Niagara Falls, where she intends to catch up with the life she might have had were it not for Kip.

She soon adopts a sidekick (that’s one of the items on her list: get a sidekick) in the form of Lois (Tara Blau), a casually suicidal alcoholic who plans to drown herself in Niagara Falls. Lois initially resists Cass’ manic, motor-mouthed intrusion into her self-destructive weekend (“You’re kind of all over the place, aren’t you?” she asks early on), but eventually joins her as Cass takes helicopter rides, buys wigs off of strangers and initiates an affair with Capt. Mike (Michael Wiles), the sweet, lonely pilot of a Niagara tour boat.

What Cass doesn’t realize is that Kip has hired a pair of affably bickering husband-and-wife private investigators (Sylvia Anderson and Joseph Cicio), who, disguised as bellboys, are literally and figuratively carrying a lot of baggage of their own. All of this ultimately leads to Kip’s appearance, and a bizarre, six-person group-therapy session conducted like an episode of the Newlywed Game.

Into all of this mayhem wander a series of local oddballs, all played with maximum vigor by Shannon Veon Kase; this whole one-actor-playing-several-parts thing, which has become commonplace in modern theater, is beautifully satirized win a brilliant late-in-the-day revelation that is nothing short of brilliant.

The cast is certainly committed, with Blau and Matthew turning in the most nuanced performances, not an easy task with material this thinly drawn. Wiles and Barr are convincing as troubled men with deep, wounded feelings, but Cicio and Anderson, as the private eyes, seem to have given up on trying to find any shades or layers in their characters, playing them as the big one-note cartoons they are, while nailing the comfortable glee these two accomplices have found in each other’s presence.

One of the chief wonders of Wonder is the set by Elizabeth Bazzano, with bedrooms and hotel suites gliding on and off among puffs of mist, with docks, helicopters, boats and barrels cleverly and playfully suggested as they float, glide and bob about the stage. (Note to stage manager: you might want to keep the crew quieter backstage; the audience could hear them talking and thumping things into place on opening night.)