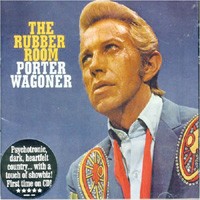 Among the treasure trove of insanity that is in George Jones’ autobiography I Lived to Tell It All is the County Music Hall of Famer’s open admission that for years he suffered from hearing incessant voices inside his head. Two voices, to be exact: an old man who had no name, and a duck, whom Jones named Deedoodle. The old man and Deedoodle the duck would get in long, vicious arguments, distracting Jones so completely that at one point in 1979, blasted on booze and coke, he sang an entire concert in the voice of Deedoodle the duck.

A live recording is not known to exist, but if so, the Omni Recording Corporation would surely and desperately pay top dollar for it.

Licensing and reissuing classic but way-the-hell-out-there country music is the label’s forte, its maiden release having been a spotlight on Henson Cargill, who drawled not about those country standbys of loose women and lost love but, rather, Adolph Eichmann and the stupidity of the space race. Omni has also recently, and rightfully, honored the demented genius of four-time Grammy-winning gospel singer Porter Wagoner with a collection entitled The Rubber Room: The Haunting Poetic Songs of Porter Wagoner, 1966&–1977. Its title track is a reverb-drenched portrait of Wagoner’s real-life psych ward, built with mirrors and cushions on every surface, a personal sanctuary where his static head noise could be cleared by writing songs of varying lunacy.

Three musically distinct songs are threaded in and out of each other in “George Leroy Chickashea” to create a country-soul powwow hodgepodge that concerns a man who pleads with God to let him die because he is part black; Wagoner even sings a love song to his own bones. But what’s entrancing is Wagoner’s pure sincerity with even the most hermetic material. Alcohol-induced dementia could be to blame, as evidenced by songs like “The Bottom of the Bottle” and “Wino” (the kitschy sound effect of a desperate alcoholic rummaging through trash cans begins and ends the song).

Wagoner is presented on the CD’s cover resplendent in full country regalia in a vibrant blue suit by famed designer Nudie Cohn and sporting a Murray’s Pomade pompadour that could knock over a building. But he’s loosened his tie and, his face covered in sweat, is looking upward with a mixture of captivation and horror on his salted face.

Alcohol was not Wagoner’s only problem in life; many of his trials stemmed from a genuine desire to do good at a time when the country-music establishment refused to recognize his vision. (Wagoner once caused a Southern-conservative ruckus by bringing his friend James Brown along as his guest to the Grand Ole Opry, and he defied gender roles by performing with an all-female backing band.)

But Wagoner’s reputation will probably always be linked to his crumbled relationship with duet partner Dolly Parton, whom he discovered and featured on his long-running TV series, The Porter Wagoner Show—especially since country-music couples, at least before the days of CMT, chronicled their ups and downs on vinyl rather than camera.

After their split in 1974, Parton fought with Wagoner for years over songwriting royalties, but Wagoner’s penchant for songs in which an adulteress ruins a man may hint at some personal tumult as well, an unhinged depression that saw the performer turning over the years more and more to the comforts of religion instead of the stage.

So where is Porter Wagoner now?

The corner of Broadway and Fifth in Nashville is informally known as “Legends Corner.” Within blocks of the Ryman Auditorium, the Ernest Tubb Record Shop, the Grand Ole Opry and the Country Music Hall of Fame, the faces of country-music legends come alive in the intersection’s sculptures and murals. But on a recent visit, the likeness of Porter Wagoner is nowhere to be found. Furthermore, I asked the people passing by here in the very heart of Country Music USA about Porter Wagoner; it only resulted in shrugs and blank stares. The fact that, after a 50-year career and huge success as a gospel singer, “Mr. Grand Ole Opry” is so vastly unrecognized is probably the impetus for his recent signing to Anti- Records, a label that has shown an affinity for forgotten performers of great talent, like Mavis Staples, Merle Haggard and Ramblin’ Jack Elliott.

Wagonmaster, the Anti album due in June, will not top Billboard’s country charts. But with engaging songwriting and with Wagoner in perfect voice, it will at least redeem him from the nutball status so sweetly suggested by The Rubber Room. These days, his insanity has taken form in the guise of different outside characters, most notably the poor songwriter featured in “Committed to Parkview” in a song composed by Johnny Cash in 1981 for Wagoner and immediately lost—until now. In economic rhyme, the tune chronicles the denizens of the mental ward with a sympathy for inmates that is pure Cash; Wagoner delivers it impeccably. Both men had spent time there.

Other mental states abound. “Albert Erving” chronicles a man who keeps a portrait of a nonexistent woman hanging on his wall, and “Be a Little Quieter” is an admonition to imaginary sounds. Both signal an overcoming of whatever anguish dulled Wagoner’s pen throughout much of the last two decades, and, aided by producer Marty Stuart’s top-notch band, the 79-year-old singer sounds more alive than ever. Paced like a stage show, replete with introductions and instrumental breakdowns, Wagonmaster is a hoot of a listen from an American original.

Is Wagoner the craziest of them all? Not by a long shot. Once, while Wagoner was using a bathroom stall, a he felt a hand reach around his groin and yank at his penis, twisting it and pulling it mid-urination. Shocked, he spun around. Who do you think stood before him, fucked up out of his gourd? You guessed it: George Jones.