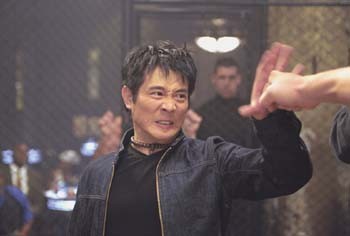 Maybe a Little Kick: Jet Li defeats enemies with the greatest of ease in ‘Cradle 2 the Grave.’

Author Dennis Hensley on Jet Li, fighting with girls, and ‘Cradle 2 the Grave’

Dennis Hensley is not talking. Not much. Not yet.

That’s good for the other popcorn-clutching theater bums scattered about the cineplex this sunny afternoon, staring in shell-shocked wonder as Cradle 2 the Grave–starring DMX, Jet Li, and Tom Arnold–explodes across the big, reverberating screen before us. Aside from occasional exhalation of “Whoa!” and “Ouch!,” my guest stays respectfully mum throughout the film, though it’s pretty unlikely–given the noise of exploding safes, heads, and helicopters, and the deafening snap! snap! snap! of loudly breaking bones–that anyone could have heard Hensley cracking jokes above all the din.

Hensley, after all, is a card-carrying master of the midfilm wisecrack. He’s the L.A.-based author of the new book Screening Party, a follow-up to his bestselling 1995 hit novel Misadventures in the (213), about a gay would-be screenwriter on the fringes of Hollywood. In Screening Party, Hensley gathers a motley assortment of characters to watch DVDs, capturing their bitchy banter and borderline-cruel deconstructions of everything from Steven Spielberg’s Jaws to Mariah Carey’s Glitter. Driven by Hensley’s off-kilter wit and naughty-boy style, Screening Party is an homage to the fine art of talking during movies.

But we’re in public now, and Hensley–impressively self-contained–waits patiently till the rowdy climax of Cradle 2 the Grave. The film is about a gang of born-again jewel thieves (lead by rapper-turned-thespian DMX) who steal and lose a bag of mysterious black gems, then team up with a Taiwanese secret agent (Li) and a motor-mouthed purveyor of stolen goods (Arnold) to get the jewels back and along the way locate DMX’s annoying kidnapped daughter, kill a bunch of ugly people, and save the world from a well-dressed cabal of weapons dealers trying to get their hands on the stolen gems, which turn out to be powerful pellets of concentrated plutonium capable of flattening civilization as we know it.

“It was so ridiculous,” Hensley says as we exit the theater in search of caffeine and a bit of well-earned quiet. “But it was kind of fun, in a way,” he admits. “I think I expected something darker, more realistic–less expensive to film. But it was just so silly.” After a pause, he adds, “You know a film is in trouble when Tom Arnold is a breath of fresh air.”

“I kind of like Jet Li,” he goes on. “I love how he has only one expression and never breaks a sweat. He doesn’t even move, basically. In fight scenes, he just stands back and goes, ‘Maybe I’ll kick a little.'”

Cradle 2 the Grave–“What does that title mean?” Hensley asks–is the kind of movie where fight scenes include people running up walls, spinning horizontally to avoid flying bullets, and launching volleys of kicks and kung fu chops so fast and furious you begin to wonder how John Wayne ever got away with merely slugging a guy.

“Have you ever punched anyone?” I ask Hensley.

“Oh, no, I’m a huge pussy,” he laughs. “I was in a fight with a girl, once. Three girls, actually, and I think I kicked their asses. They attacked me and I freaked out and just kind of went off on them, hitting, slapping, whatever it took. So I won, but then we all got swats in the principal’s office.”

Having located a coffee shop with an outside table not overly covered in pigeon-droppings, Hensley cuddles his designer coffee as he takes a seat to swap our favorite Cradle 2 the Grave movie moments. Mine is the scene where Jet Li is chased by a vicious Doberman, and runs up the side of an alley wall, leaping over the dog’s head to land back on the ground–and then the dog does the same thing.

One of Hensley’s favorite bits is the “CSI moment,” when a bad guy gets a weaponized slug of concentrated plutonium shoved down his esophagus. We witness this event in a shot from inside the esophagus.

“I thought that was pretty delicious,” Hensley admits, “though I’ll bet, in another version of that scene, Jet Li shoved that thing right up the guy’s ass.

“Actually,” he adds, “I’ll bet it’s the same inside shot in both versions.”