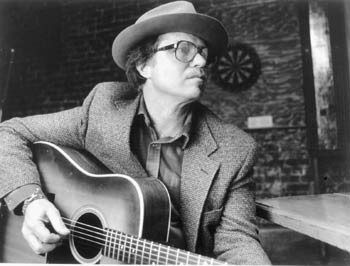 There’s a pungent whiff of ’60s counterculture emanating from Country Joe McDonald’s website (www.countryjoe.com)–and this Berkeley-based hippie-era rock icon isn’t apologizing for any of it. Click on over to Country Joe’s Place, as the site is called, and catch the latest “news flashes and acid flashes”; read a transcript of Joe’s testimony at the infamous 1970 Chicago Seven trial; find a link to the Rag Baby e-zine. Or drop a little spare change.

This cyber bazaar offers everything from Avalon Ballroom psychedelic poster art to imported Italian-vinyl pressings of the 1967 Country Joe and the Fish album Electric Music for the Mind and Body to Country Joe’s own 1987 Honda Accord LX, the one with the GIMEANF license plates.

If you’re still not feeling the vibe, consider that McDonald–who is headed to Hanoi, Vietnam, on June 26, where he will be a recipient (along with Bob Dylan and Joan Baez) at the World Peace Music Awards–is reuniting most of the original band for an upcoming show at the Sebastopol Community Center. (Barry “the Fish” Melton is sitting this one out.)

During a phone interview from his Berkeley home, the 62-year-old McDonald sounds slightly, uh, stoned, but enthusiastic about politics and especially the prospect of reuniting with his former band mates. “I’ve played with a lot of guys over the years,” he says, “but to get musicians together who can make the ’60s stuff come alive and breathe has proved just about impossible.”

These days, McDonald’s own musical tastes run further afield than the acid rock that launched his career. Musically speaking, he’s come a long way since his appearance in the 1970 film Woodstock, which captured McDonald–a Navy veteran and prominent antiwar protester–delivering the famous Fish cheer for which he is so closely identified (“Gimme an F. Gimme a U. Gimme a C. Gimme a K. What’s that spell? What’s that spell?”).

His 21 solo albums run the gamut from folk to blues to art music. They include the acclaimed 1969 album Thinking of Woody Guthrie, which showcased his talent as a folk interpreter; Superstitious Blues, a strong 1991 set of folk and country blues that featured Jerry Garcia on several tracks; 1995’s Vietnam Experience, a dozen powerful antiwar songs, including a new rendition of his “I-Feel-Like-I’m-Fixin’-to-Die Rag”; and 1996’s ambitious album Carry On, which includes a four-song cycle devoted to nurse Florence Nightingale.

Most recently, he has collaborated with bio-acoustic specialist Bernie Krause, a pioneering electronic musician now living in Sonoma County, to blend acoustic guitar and harmonica instrumentals with the sounds of nature for an upcoming album of meditative tracks titled Natural Imperfections. McDonald’s commitment to his counterculture ideals is the unifying theme in all these projects.

“I grew up in a family that held strong beliefs in peace and love and working together, so it was pretty easy for me to adapt to the ’60s goals,” he says, noting that his parents were left-wing activists during his childhood in Washington, D.C. “My mother later became politically active in Berkeley and my father was involved in unions. Others grew up with those same influences but later went over to the dark side, but I do what I do because it keeps me sane. I play music for myself, always have, though I enjoy it if the audience appreciates it, too. And I enjoy doing service for the community. It keeps me centered and I have no plans to change.”

Contrary to his image, however, McDonald is not the kind of person who attends demonstrations or carries picket signs. “But as people can see from my website,” he explains, “I have a wide variety of causes that I support, especially veterans and healthcare workers.”

Another cause is gay rights, especially same-sex marriage. “Coming down on same-sex marriage will certainly make us look like the Taliban, won’t it?” he ponders. “I mean, we’re in this funny historical place right now in that we’re waging war against the Taliban, and yet we have our own uprising right here among people who don’t quite fit the mold.”

That notion excites a machine-gun burst of laughter from McDonald and the conversation turns back to his used car, which was stolen and recovered last month after San Francisco Chronicle columnist Leah Garchik took up his cause. “The adventures of my Honda Accord, yeah,” he muses. “Eventually it will get sold–maybe I ought to lower the price.”