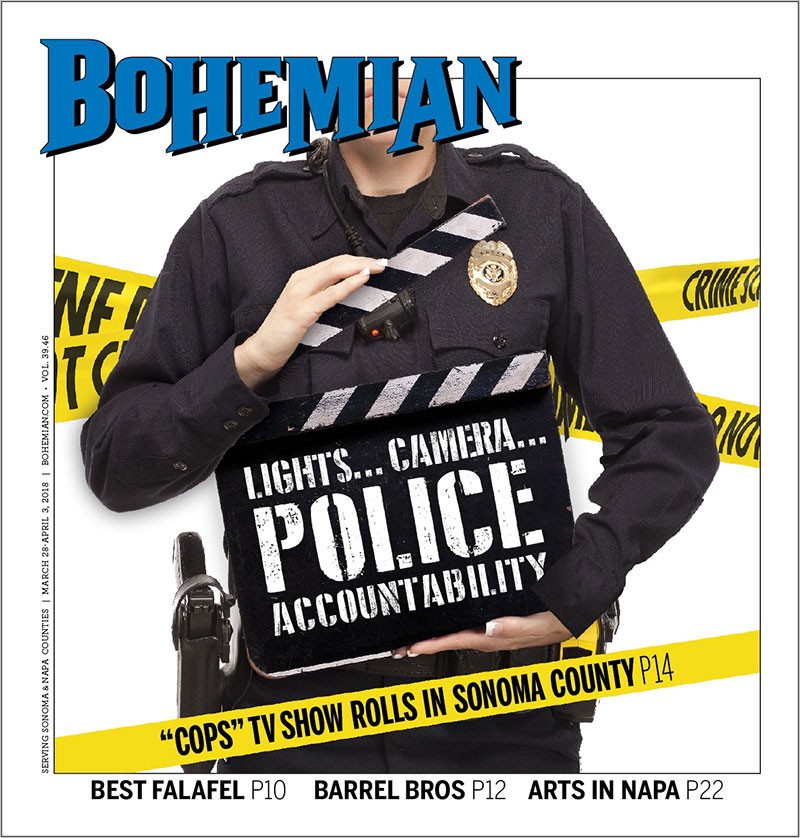 As the Cops film crews roll with deputies from the Sonoma County Sheriff’s Office (SCSO), there is growing pushback against the controversial reality TV show’s sudden arrival in the county last week—and questions about whether the Santa Rosa Police Department will ride along with the plan.

After an SCSO-led media push celebrated the show’s arrival last week, with multiple outbreaks of the show’s theme appearing in the Press Democrat and KSRO, local elected officials are now questioning the wisdom of allowing film crews into a region hammered by the October wildfires and continuing to deal with fallout from the shooting death of 13-year-old Andy Lopez in 2013. All of that, and it’s an election year, too, which will see the first contested sheriff’s race in more than two decades.

Sonoma County Supervisor Lynda Hopkins represents the part of the county where Lopez was shot by a deputy who remains on the force as a lawsuit against the SCSO and Sonoma County drags on. She wonders if Cops is in the best interest of her constituents.

“Given the heightened anxiety in our community in the wake of the fires, going through a sheriff’s candidacy and election process,” she says, “I would question anything that could disrupt the fragile peace that we have right now in general.”

It’s unknown at press time whether the Santa Rosa police will sign a contract with Langley Productions, the Santa Monica–based production company that produces Cops.

Santa Rosa Police Chief Hank Schreeder is meeting with Santa Rosa City Council members this week and taking the pulse of the community before he makes a decision, say city council members, the city manager’s office and a spokesman for the city police force.

“They are still in the planning phase as far as the contract
goes,” says Santa Rosa police
Lt. Rick Kohut. He says Schreeder might decide to pull the plug on Santa Rosa’s participation in the program. “I would say that it is a possibility,” Kohut says.

At issue is the content of the contract and the extent to which it gives the Santa Rosa Police Department (SRPD) latitude to participate in the editing of the show. The SCSO contract signed in March gives the sheriff’s office final say over what clips are used.

And, says Kohut, the chief is aware of the show’s controversial history of portraying policing in starkly “black-and-white” terms—often literally—and how such portrayals might be viewed as counterproductive to effective policing.

“We absolutely want to avoid that,” Kohut says.

But can they? Even as Langley Productions was emailing the SRPD and SCSO to solicit their interest in participation in January, the Marshall Project criminal-justice organization produced an investigative feature on Cops that declared it the “most polarizing reality show in America.”

That’s a message city officials are hearing as they meet with Schreeder this week to figure out whether to sign on with Cops.

Cops follows a general formula that features an opening bit of action, some reflection in the police cruiser and more action to close out the episode.

The stock-in-trade of the long-running show is the foot chase. It makes for great television—but does it provide a fair depiction of the communities where Cops has filmed?

“Our city image has already been negatively impacted by the fires,” says Santa Rosa council member Julie Combs. “Tourism is already down. We don’t need an unearned and exaggerated portrayal of violent crime too. I’m not sure what the city is getting out of having such a polarizing program filmed here, especially since I don’t think the show is compensating the department, even though they are making money off of it.”

Santa Rosa Assistant City Manager Gloria Hurtado says the city is waiting on the chief’s recommendation before deciding how to proceed. His recommendation, she says, will “weigh heavily.”

“The chief is doing due diligence, asking for additional information and deciding whether this is the right thing to do at this time.”

That’s not how the Cops producer envisioned the run-up to the show’s episodes set in Santa Rosa and Sonoma County. An email exchange between producer Zach Ragsdale and the show’s public relations firm the Lippin Group provides insight into what Cops‘ producers had hoped would happen.

The original plan was for the SRPD and SCSO to roll with the cameras at the same time. It’s unclear what would become of the sheriff’s office’s participation if the SRPD decides to pull the plug on Cops.

Cops has come under fire for its portrayals of racial basis. In 2013, the civil rights group Color of Change successfully pushed Fox to drop the program based on its claim of persistent racial bias. It’s now on the Paramount Network. The show has changed channels, but not its treatment of race, says Arisha Hatch, Color of Change’s managing director of campaigns. She ran the Fox campaign for Color of Change in 2013.

Hatch says that she wouldn’t expect any episode of Cops filmed in Sonoma County to be an accurate portrayal of the criminal-justice system there, “because it’s just not set up that way. . . . It has been kind of a [public relations] machine for police departments across the country for several decades now.”

The Bohemian emailed questions to Langley Productions about racial bias, the status of the contract with SRPD and what role, if any, last year’s fires played in the selection of Sonoma County. An email exchange inadvertently sent to the Bohemian between Ragsdale, who signed the SCSO contract on behalf of Langley Productions and is the point person on a presumptive SRPD contract, and the show’s PR firm revealed some of the producers’ thinking.

“This is the first time filming with this agency [SRPD],” Ragsdale wrote to the Lippin Group. “We were supposed to start filming with them last week when we started with Sonoma County but the city was slow to get the agreement complete, so I pushed the start date for Santa Rosa PD to May. The agreement still isn’t done. I prefer to give this guy as little as possible.”

The fires? The fires, Ragsdale wrote, had nothing to do with the show’s decision to come to Sonoma County.

The persistent charges of racism raised by Color of Change? “You already know how to answer this one,” Ragsdale wrote to the PR firm. The answer: don’t answer it.

After the back-and-forth between Ragdsale and the Lippin Group, Langley Productions provided the following statement to the Bohemian: “We are looking forward to featuring the exceptional work the men and women of the Sonoma County Sheriff’s Office do everyday in upcoming episodes of Cops.”

After learning about the mistakenly sent email, Cops‘ executive producer Morgan Langley weighed in: “The intent of Cops is to document the reality of policing on the ground as it happens. There is no intended bias in the show.”

Color of Change’s work on this issue hasn’t gone unnoticed by Santa Rosa officials. Less clear is whether anyone at SCSO is aware that Cops is considered by police-accountability advocates to be a highly problematic program.

“Studies have shown that this TV program portrays a disproportionate number of people of color than the actual percentage involved in crimes,” Combs says. “And it shows violent crimes disproportionately—and also underrepresents women and minorities on the police force itself. It also misrepresents effective police work. I think our city is better than this.”

The controversy over Cops now touches on who will be Sonoma County’s next sheriff and heightened scrutiny of law enforcement accountability following Lopez’s death and officer-involved shootings across the country.

Ernesto Olivares wears three hats in this debate as a member of the Santa Rosa City Council, a former city cop and a candidate for sheriff. He says that if it had been his decision to make, he would have said no to Cops.

“My historical perspective is that it hasn’t really provided any real public benefit,” he says as he emphasizes ongoing efforts at police accountability and transparency in the county.

Candidate John Mutz, a former Los Angeles police captain, says he could support Cops if it portrayed “honest transparency” in policing. At its best, he says the show portrays police officers on the beat doing a difficult job.

“People have to understand that it’s a show based on ratings and entertainment,” and that if it does reflect biases, “that is not acceptable. From my POV, as sheriff, I wouldn’t participate in that kind of viewpoint. In that case, this is more of the corporate-media coverage of crime. It is not helpful and is strictly entertainment.”

Mark Essick, the other candidate for sheriff, is currently on the SCSO force and did not respond to a request for comment.

Chief Schreeder’s due diligence is not the typical response of local law enforcement when contacted by Cops, says Hatch. In her study of the show, she has never seen a situation where “there is an effort to get community buy-in, and it’s part of the normal [public relations] machine that has been intentionally set up.”

“It might be rare, but it’s not rare in Santa Rosa,” says Olivares, who likens Schreeder’s effort to the city’s recent rollout of body-cameras. “When Schreeder introduced body cameras, he initiated input throughout the community to help shape the policy.”

Not so at SCSO, which did not reach out for community input before signing the contract with Cops on Feb. 7. The show’s producer told the sheriff’s office that SRPD would be participating.

Sheriff’s office spokesman
Sgt. Spencer Crum says SCSO had not consulted with SRPD “at all about their decision to be involved. Don’t know their decisions, other than a Cops producer told us they had agreed.”

Crum has praise for the show and did not address questions about bias.

“Cops provides a platform to provide information to the public on the good work being done by Sonoma County deputies and the challenges they face on the streets,” Crum said in response to a set of emailed questions. “It’s also a chance to showcase how far along policing, training and community relations have come since Cops started filming 31 years ago.”

The SCSO’s work with Cops had nothing to do with ongoing fallout from the Lopez incident, says Crum, who adds that the sheriff’s office based its decision on input from the Stockton Police Department, where Cops recently filmed.

“The filming of Cops was widely accepted by the community, the elected leaders and their individual officers.”

Crum believes police-accountability groups would appreciate the sheriff’s office’s efforts to provide “better transparency on a local and a national level.”

Hatch, for one, does not.

“The show never tackles accountability,” says Hatch. “It paints a one-sided view of law enforcement. At its worst, Cops is very cheap to produce, and it’s a very dangerous television show,” she says, noting that police officers can and do perform for the cameras, as she highlights that there is no profit or benefit to the community. The profits go to the Paramount Network, “and those are the people who are profiteering off of the pain of the individuals and the community. There is nothing to gain for Sonoma in Cops coming to town.”

Previous ArticleWe’re Not Going to Take It