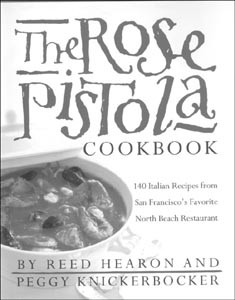 New cookbooks cater to every taste

By Greg Cahill and Marina Wolf

SINCE ITS OPENING in 1996, the Rose Pistola in San Francisco has been a focal point of the burgeoning North Beach cafe and restaurant scene. Everyone from the New York Times to Gourmet has sung the praises of this fine Italian eatery (which garnered a prestigious James Beard Award in its first year). Chef and restaurateur Reed Hearon offers 140 Italian recipes that reflect his simple adaptations of Genoese and Ligurian cuisine. The entertaining (and let’s face it, cookbooks are mostly about entertainment) and informative aspect of this unpretentious volume are the interspersed profiles spotlighting such Bay Area food producers as Sue Conley of the Cowgirl Creamery at Tomales Bay Foods in Point Reyes Station and organic farmer Warren Weber of Star Route Farms in Bolinas, as well as a hundred and one tips on keeping it simple. G.C.

I STOPPED USING my Moosewood cookbook a couple of years ago. The back index pages were falling out, and I was getting a little tired of cheesy casseroles and beans, beans, beans. But the newest offering in the Moosewood Restaurant library (there are eight books so far, not including Mollie Katzen’s solo efforts) may be just the thing to bring me back to the meat-free fold, at least for lunch. The collectively owned and operated Moosewood Restaurant has been serving up mostly vegetarian fare for more than 25 years. The collective’s efforts recently earned Moosewood a place in Bon Appetit‘s list of the most revolutionary restaurants of the century. Never has the collective’s dedication been so delicious–and accessible–as in Moosewood Restaurant Daily Special. The book offers close to 300 recipes that form the backbone of the restaurant’s lunch menus. Here there are soups enough to drown a horse, and salads of all sorts to revive it. The offerings span the globe, from Algerian Tomato Soup with Vermicelli to Westphalian Vegetable Stew, and the presentation spans the spectrum of dietary requirements–vegan, low-fat, low-carb, quick-n-easy. Each recipe is accompanied with a string of possible accompaniments, following Moosewood’s simple tradition of the daily special: soup and a selection of salads. M.W.

DO TOO MANY cooks spoil the broth? Not if the cooks are TV chefs Julia Child and Jacques Pepin, whose opinionated approaches to good cooking are as delightful as they are different. The PBS television show featured the two master chefs engaged in unscripted discussions about all of their favorite foods and ways to make them. Predictably, the resulting show was a bit, er, lively at times, but hey, a vigorous exchange of views can only benefit the art. The companion cookbook has captured much of the vibrancy of the television show, with each concept, ingredient, and recipe flanked by comments from both chefs. In this book, even simple salads merit the full focus of Julia and Jacques’ attention, and the resulting dialogue is full of good flavorful hints at what cooking can and should be. Don’t let the detailed photography and simple layout fool you: this is not a book for beginners, who may not be able to deal with the ambiguity and diversity of views that are inherent, perhaps even essential, to the book’s structure. However, it is the perfect tome, weighty and filled with some of the classics from French and American cuisine, for the home cook who is reasonably comfortable with sharp knives, multistep recipes, and special orders at the butcher counter. M.W.

YOU COULD ARGUE about the exclusion of some very fine restaurants from this anthology of recipes and essays, but there’s no denying that the folks who made the cut are all worthy. This Seattle-based publisher is known for its culinary guidebooks, and this is the first attempt to cull those collections for the firm’s first cookbook. There are a few challenging items included here, but for the most part the authors have kept their offerings mercifully simple. And you’ll recognize several North Bay names, including Hemenway’s in Santa Rosa, Belle de Jour Inn in Healdsburg, Huckleberry Springs Country Inn in Monte Rio, Glenelly Inn in Glenn Ellen, the Gables Inn in Santa Rosa, Brix of Yountville, Half Day Cafe in Kentfield, and the Wine Spectator Restaurant at Greystone in St. Helena. And while you may find the braised Napa cabbage and Beaujolais sauce from Left Bank in Larkspur too daunting, the tequila-marinated Cornish hen (from Las Camelias Mexican Restaurant in San Rafael) is a walk in the park. G.C.