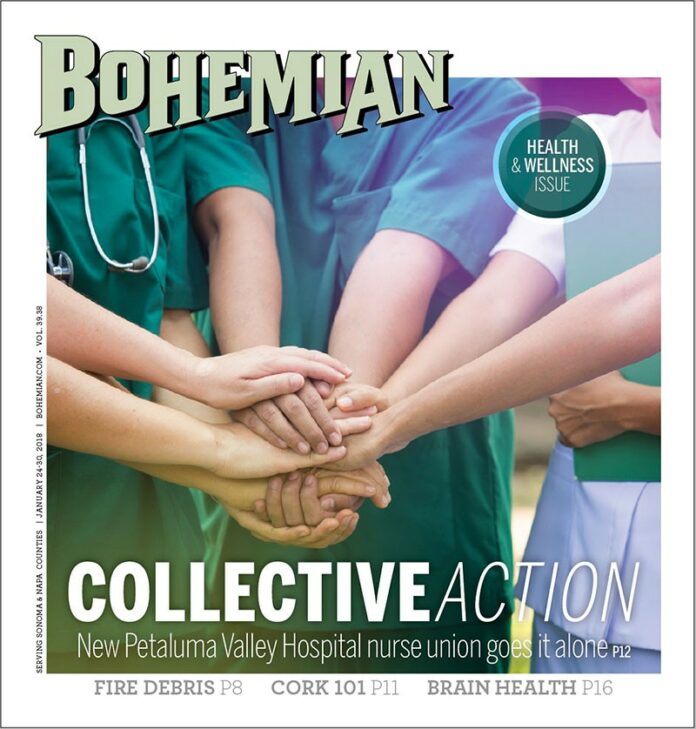 Breaking away from the powerful California Nurses Association was a long and difficult road for the nurses at Petaluma Valley Hospital, but after a more than two-year battle, the healthcare providers overwhelmingly voted to form the Petaluma Staff Nurse Partnership union last month. The move marked a rare instance of a bargaining group decertifying their representation from the powerful nurses’ union. But the new union’s work is only beginning.

The 130-member, independent union finds itself advocating for investments in services and increased staffing from a hospital operator who may not be around much longer. While creating their own union means nurses can push for site-specific needs, will the novice organization be able to deliver a new contract for its members?

The Petaluma Health Care District owns the hospital and leases the 80-bed facility to
St. Joseph Health. But St. Joseph’s 20-year contract expires this month. Negotiations between St. Joseph and the district broke down a year ago over a failure to agree on financial terms and preserving women’s reproductive-health services. St. Joseph has agreed to stay on until September or until a new leasee is found.

Paladin Healthcare, a Southern California-based for-profit company, has expressed interest in leasing the hospital, but those talks foundered over the hospital’s information technology system. The district had hoped St. Joseph would leave its system behind to give Paladin a chance to transition to their system, but St. Joseph says it’s simply not technically feasible to decouple or leave the hospital’s technology behind.

Talks between Paladin and the district appear to be breaking down, too, as neither party wants to take on undue risk. According to a Jan. 18 Petaluma Argus-Courier article, the district will explore all options, including selling the hospital and reopening negotiations with St. Joseph Health.

In the meantime, the new nurse’s union is in a state of limbo and alarm as nurses say the hospital’s staff is stretched too thin.

Jim Goerlich, president of the Petaluma Staff Nurse Partnership union, said the stress over the breakup with the California Nurses Association (CNA) and the time it took to create a new union took a toll on nurses.

“The unrest caused a lot of nurses to go elsewhere,” he says.

That labor battle is over, but the nurses now face challenging negotiations with St. Joseph. Goerlich says low wages and insufficient staff are still causing nurses to leave and could put patient care in jeopardy. He says nurse wages, which range from about $40 an hour for a new hire to $75 for senior nurses, are about 10 to 15 percent lower than other nearby hospitals.

“There are hospitals in either direction,” says Goerlich, “where they can make $10 to $20 more an hour than they are making now.”

Meanwhile, Goerlich says the hospital needs to hire about 30 nurses to meet demand. “The ER hardly has anyone to pull from,” he says. “It’s definitely having a big effect. You can’t do that day after day. At some point there will be a problem. The public has a right to know.”

It’s not just nurses who are raising the alarm. Earlier this month, a group of Petaluma Valley Hospital physicians went public with a letter that said St. Joseph’s failure to invest in the hospital is making it hard to retain doctors. The doctors said the hospital’s decline is “by neglect or by design to disable and cripple” the hospital prior to St. Joseph’s departure.

St. Joseph spokesperson Vanessa DeGier says the nurses who have left the hospital have done so because of the uncertainty of the hospital’s future operator, not due to pay or staffing issues.

“Jim [Goerlich] is entitled to his opinions, though his opinions should not be misconstrued as fact,” DeGier says in an email in response to questions about the hospital.

Nurse-to-patient ratios are set by the state, and DeGier says the hospital is fully compliant.

DeGier also points to St. Joseph’s $64 million investment in staff, infrastructure and services over the course of the lease, a figure she says is triple what the healthcare district asked of St. Joseph. While those investments have been made over the past 20 years, St. Joseph purchased a new 3D mammography device last month for $950,000.

“We continue to invest in the hospital today,” DeGier says.

“What we want from St. Joseph is for them to do the right thing during the hospital’s transition period and our upcoming negotiations,” he says. “For the last 20-plus years, they have been deeply involved with the health and wellness of the community of Petaluma and with all of the employees of PVH. Between us and the rest of the neighboring communities who seek service here, we all expect St. Joseph to continue making decisions related to PVH as if they were looking at the beginning of another 20 years of stewardship, because no matter who ends up operating the hospital at the end of this transition, St. Joseph should, out of respect and a sense of decency, leave us all a valuable and viable hospital.”

If they are not willing to do that, says Goerlich, St. Joseph needs to acknowledge its responsibility in separating the IT system it installed to get ready to hand it over to the next operator.

“They designed this system knowing there was a good chance they would not be the future operators, and their refusal to do this is holding up the process. Basically, they don’t want to pay to separate the system they installed.”

Ramona Faith, CEO of the Petaluma Health Care District, says that, while the agency cannot dictate nurse staffing, it does monitor the quality of patient care, which she says is impressive.

In spite of the labor battles and search for a new operator, the hospital gets high marks. Last month, it received an A in the Hospital Safety Grade by the nonprofit Leapfrog Group. It was the highest-scoring community hospital in Northern California.

The hospital was recently awarded an advanced certification for stroke services from the Joint Commission and the American Heart Association/American Stroke Association, the first hospital in California to earn the national nod. Petaluma Valley Hospital also received recognition as a “baby-friendly” designated birth facility by Baby-Friendly USA, a global initiative to promote breastfeeding. The hospital is the only one in Sonoma County to receive the designation.

While he says nurses are overloaded, Goerlich is proud of the work they perform, work that came into strong focus during October’s fires. Petaluma Valley Hospital treated about 35 patients affected by the disaster in its emergency department. The number of patients the hospital’s emergency department has treated has doubled since the wildfires started. Four patients were in active labor and delivered their babies at the hospital during the disaster.

St. Joseph and the health district officials say they are eager to enter into negotiations with the nurses. Goerlich says all options are on the table. “St. Joseph needs to decide if they are interested in continuing to operate, invest and grow the hospital based on what services the community and the board are insisting be offered there.”

While the new union won’t have the political clout of the CNA, a union that is focused only on one hospital can have its advantages for all parties, says Joanne Spetz, professor at the Philip R. Lee Institute for Health Policy Studies at the University of California in San Francisco. Engaging with management on quality of care outcomes and learning where the pressure points are will help the union, management and ultimately patients, she says.

“Where are the places where there might be some leverage and room to be creative? That’s something you are not going to hear the CNA do.”

Still, as newcomers to the world of healthcare finance, the new union has its work cut out for it, she says. “They are going to be on a steep learning curve.”

Tom Gogola contributed to this story.