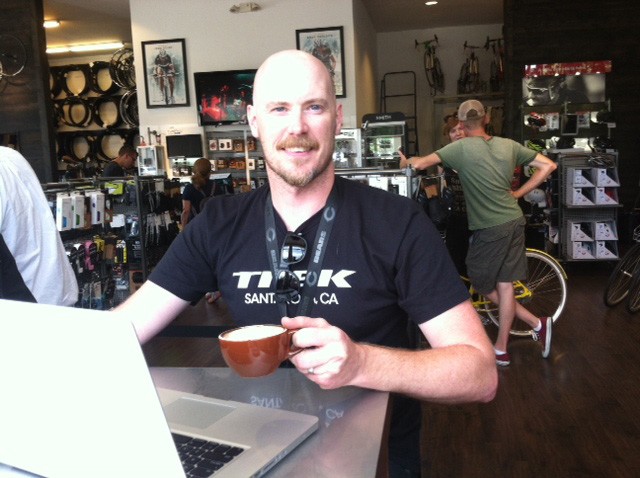 That’s the deal at Santa Rosa’s new *RKTO Coffee, located inside the Trek Bicycle Store on Mendocino Avenue. Bikes are better for you than smoking and eating fried dough, and pairing bicycles with coffee is as much about community building as it is selling lattes, says Bret Gave (pictured), owner of the bike shop and cafe.

The cafe has been in the works for more than a year. Because *RKTO is a hybrid coffee cart and cafe (the bar is on wheels) obtaining the permit was a little complicated. The five-week old cafe has a cool, industrial-minimal look. The smell of roasted coffee mingles not unpleasantly with the aroma of knobby tires.

Phase two of the cafe will feature beer on tap, sandwiches and outdoor seating. When it’s all done, you’ll be able to start a bike ride with a cup of espresso and come back for a cold brew.

What’s up with the name? *RKTO is the proto Indo-European base word for “bear,” as in Bear Republic. Linguists use an asterisk to mark a hypothetical reconstruction. At least that’s what I read. It’s a good subject for discussion over a cup of coffee.