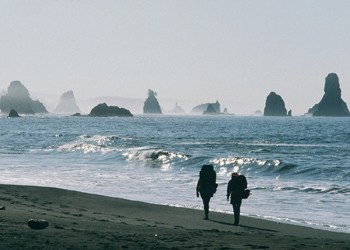 Populist Power: Nature’s beauty doesn’t only belong to the rich.

Coastwalk reminds us that the ocean belongs to everyone

By the law of nature these things are common to mankind–the air, running water, the sea, and consequently the shores of the sea. No one, therefore, is forbidden to approach the seashore . . .
–The Justinian Institutes, A.D. 535

They want to take the ocean from us: Billionaires like media mogul David Geffen whose enormous egos are matched only by their oversized seaside mansions. The oil-addicted petrochemical and automobile industries, already using the coming energy crisis as an excuse to pursue more offshore drilling. These and other like them would undo 15 centuries of common law, first established by the Roman Emperor Justinian, that declare the oceans and their shores belong to all of us.

Even as multimillion dollar homes in Laguna Beach slide off their precarious cliffside perches into the sea, the perverted propagandists of private property are hard at work attempting to undo the one act of legislation that has so far prevented unbridled development of the California coast. Later this summer, the California Supreme Court will rule on a case brought by developers and a property rights lawyer that could usher in the demise of the California Coastal Commission, established by the will of the California people in 1972 and later reinforced by the state Legislature.

Reminding people of the need to protect public access to California’s 1100 miles of coastline is the primary mission of the nonprofit organization Coastwalk, explains executive director Richard Nichols.

“Under the state constitution, the public has a right to access state tidelands,” Nichols says, seated in his Sebastopol office. “The problem is, you can’t always get to the shore if the land is privately owned. You can be on the beach in the most exclusive enclave in the world, but you can only get there by boat.” Since its inception in 1984, Coastwalk has made increasing access to California’s shoreline by foot its number one priority.

“The beginning goes beyond us,” Nichols says, discussing the Sonoma County origins of Proposition 20, the “Save Our Coast” initiative that brought the Coastal Commission into being in 1972. “It started with the whole business at Sea Ranch [the development on the northern Sonoma Coast that now features more than 1500 luxury homes]. When that was proposed, a lot of people realized that 10 miles of the shoreline was going to be closed off to the public.”

One of those people was legendary Sonoma County activist Bill Kortum, veteran of battles against the proposed Bodega Head nuclear power plant and Warm Springs Dam. With Sea Ranch, the honor system established by previous coastal property owners–in which anyone wishing to cross private property to access the beach could deposit a dollar in red boxes set up for that purpose–would be abolished. The Sonoma County activists joined forces with people such as Lew Reid, principal author of Proposition 20, forming the statewide Coastal Alliance organization and turning to state lawmakers for help.

“They tried to get the Legislature to pass an access act,” Nichols remembers. “The Legislature wouldn’t do it.” The Coastal Alliance took their cause to the people, and despite well-funded opposition, Proposition 20 passed with 55 percent of the vote.

It was a heady victory, and others were to follow. In 1980, the Legislature passed the Bane Bill, which required Sea Ranch to provide public access to the shoreline with five trails or “vertical easements” leading to the beach. (Today, there are six public access trails at Sea Ranch.) It was in the early 1980s that the idea that would eventually become Coastwalk was hatched, Nichols says, by Bill Kortum and Tom and Vivian McFarling.

“Bill saw that we still had a need for promoting access,” he says. “The idea was to get 1,000 people together and hike down the Sonoma County coastline. Tom and Vivian decided to do a hiking and camping trip with 70 people. This was only going to be a one-time deal, but everybody had too much fun.”

Nichols and his wife met the McFarlings shortly after that first outing and quickly became hooked on the concept. In 1984, Coastwalk was formed, offering groups guided, week-long hiking and camping trips along the California coast for a modest fee. By 1994, Coastwalk featured outings in all 15 of California’s coastal counties, from the Oregon to the Mexican borders. Nichols estimates some 500 people participated in the organization’s 23 outings last year. The cost is relatively inexpensive, Nichols says, when compared to the prices charged by for-profit adventure touring companies offering similar excursions.In addition to conducting guided hikes, Coastwalk has also published two volumes of Hiking the California Coastal Trail (Bored Feet/Coastwalk; $18) and next year hopes to begin installing signage on trails in all 15 coastal counties.

Coastwalk uses the funds it collects from the hikes and its publications, along with charitable donations and grants from organizations such as the Coastal Conservancy, to further its primary mission: increasing public access to California’s coastline. While significant barriers to public access remain–including private property, military bases and the shoreline’s ever-shifting geography–progress is being made, Nichols says. Recent good news includes the public acquisition of 13 miles of shoreline from Hearst Ranch in the San Simeon area and a few miles of shoreline from Stornetta Ranch near the Point Arena lighthouse on the Mendocino coast.

“We’re going to be able to put in two-and-a-half miles of coast trail there,” says Nichols, who is one of the few hikers who has ever traversed or “through-hiked” the two-thirds of California’s 1200 mile-long coastal trail system that is currently passable.

Indeed, for advocates of public coastal access, things seem to be looking up. Last month, after years of legal squabbling, billionaire David Geffen was forced to provide access to the beach in front of his sprawling Malibu estate, the first new access granted in Malibu in 20 years.

Still, much hinges on the California Supreme Court decision due later this summer. If the forces of private property and development prevail, the Justinian Institutes that first established the concept of the commons so long ago, along with the California Coastal Commission, which provides the access the public presently enjoys today, could literally become things of the past.