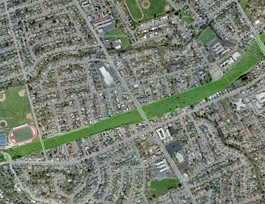 An empty Santa Rosa swath of land, once slated for a freeway, finally moves into a second life

On June 23, the Southeast Greenway preview tour sponsored by LandPaths was intended to offer a meandering walk alongside a two-mile swath of Caltrans-owned land running between Farmers Lane and Spring Lake Park in Santa Rosa.

And it did—until a group of homeowners, some of whom lease part of the land from Caltrans for horse pastures, confronted the tour, declaring the area “private property.”

Linda Proulx and Thea Hensel, co-chairs of the Southeast Greenway Campaign, were on the hike. They tell the story as we sit in a car, musing over a new “Private Property” sign recently posted on a gate above Summerfield Road. “They jumped out of the bushes,” says Proulx, recounting the incident with surprise.

The story is another in a lineage that would make fine fodder for an environmental suspense novel. For a property that can barely be seen from the highway, the strip of land has a dramatic history, caught between neighborhood activists agitating for a modern greenway, homeowners worried about loss of privacy and those with a taste for asphalt and cement.

First purchased by Caltrans in 1959, the parcel was slated for a Highway 12 bypass complete with a bridge over Spring Lake. But activists rallied, forming the Committee to Save Spring Lake, and construction was postponed. By the ’90s, amid a weak budget and community opposition, the bypass was removed from the general plan. Since then, it has stood undeveloped, inhabited by horse pastures, informal footpaths, the homeless, deer and occasional paint-ballers.

“When you’re driving around the neighborhood, you don’t get the impact of how big it is and where it really goes,” says Hensel. “They used to call it the bridge to nowhere, but this is not a road to nowhere. This is a path to the park and the downtown area.”

It’s the potential for a corridor that would link a “cut-in-half” Bennett Valley with the east and west sections of Santa Rosa that inspired the formation of the Southeast Greenway Campaign in 2009. The committee is working to see the 50-acre parcel transformed into a space humming with community gardens, trails, creeks, bike depots, heritage orchards and community interaction.

Recently, the all-volunteer-run project was chosen as a study subject by the American Institute of Architects Sustainable Design Assessment Team (SDAT) a program that helps communities develop a framework for a sustainable future. The SDAT application process is a selective one, says Erin Simmons, director of design assistance at the institute.

“We found the Southeast Greenway application to be particularly compelling given the undeveloped nature of the property,” says Simmons by phone. “There are not many communities that can boast an untouched two-mile swath of land running through existing neighborhoods.”

In June, a national team of city planners, landscape architects and urban designers descended on Santa Rosa for three days of focused discussion, study and town hall meetings on the greenway’s possibilities.

“It’s a really compelling story,” says Wayne Feiden, SDAT team leader. “That corridor was created at the birth of interstates in the country. Yet as a nation we’ve made a lot of changes, and we no longer think that interstates are a solution to all the problems.”

A formal report will be issued in the fall, but the team has already recommended that the Southeast Greenway Campaign consider the possibility of partnering with Caltrans instead of trying to acquire the land.

“This had always been deemed as a road or some sort of transit corridor, and the SDAT’s evaluation was to keep it as a transit corridor. But that doesn’t necessarily mean building a road and putting cars on it,” says Hensel.

If the campaign’s vision comes to fruition, it would result in the ability to travel from Spring Lake to Forestville via interconnected bike and pedestrian paths.

Feiden says that, in his discussions with people living around the parcel, those opposing the greenway don’t like the idea of a public trail near their backyards. But, he notes, the land could still be sold to a developer, leaving open the possibility that houses could replace pastures and orchards.

“Caltrans is not a parks agency,” he says. “They are not going to hold the land as a park. We hope to keep it as a transportation network.”

Adds Proulx, “We’re trying to create livable, walkable, bikable neighborhoods so that we can all have more community without getting into our cars every minute of the day.”