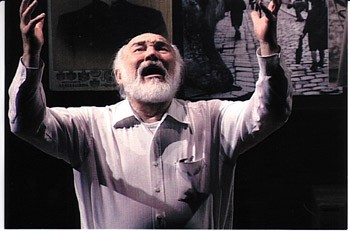 ‘Comrades and Chicken Ranchers: The Story of a California Jewish Community,’ the inspiration for ‘Chutzpah!’

A sliver of afternoon sun slips in through the blinded windows of a large meeting hall at Sebastopol’s United Methodist Church, warming the room with its light while illuminating a small table on which stands a large cooking pot.

On the wall nearby is a large painting of Jesus, surrounded by fluttering doves. With open arms, he is welcoming a tiny group of smiling children. Across the hall, Pauline Pfandler is herding a much different group–eight seasoned actors–toward the waiting piano. It’s time for vocal warm-ups, after which the troupe will practice several of the songs from the musical Chutzpah!, the true-life story of radical Jewish chicken ranchers in Depression-era Petaluma.

Appropriately, many of the show’s songs are in Yiddish, including the haunting folk tune “Ale Brider” (“We Are All Brothers”). Standing in a loose semicircle in front of the piano, the cast serenade the empty room with the stirring words that, roughly translated, say: “We are all brothers / Oh, yes, all brothers / And we sing happy songs / We feel ourselves as one / Oh, yes, we stick together / Something you don’t find everywhere / Oh, oh, oh!”

When the song comes to an end, everyone smiles.

“That was beautiful!” says Pfandler, director of the West County Theater Arts Guild, and also the writer and director of Chutzpah! Pfandler waits a bit before adding, “But it’s not supposed to be beautiful. These people weren’t professional singers,” she reminds the cast. “They were chicken ranchers. I want to hear it again. This time with more roughness. Roughness and realness.”

They do it again.

This time, with less emphasis placed on blending so melodiously and with more passion injected into the meaning of the words–“Un mir zainen ale brider / Oi, oi, ale brider”–it’s definitely rougher and more authentic, a shade less polished and a tad more “chicken ranch.” And the song is still unbelievably beautiful.

Described by Pfandler as “the story of a most unusual American community,” Chutzpah!–based on Kenneth Kann’s popular book Comrades and Chicken Ranchers–had its official debut last October at Spreckels Performing Arts Center. The show exceeded expectations by selling out every show, including added performances, accumulating a long waiting list in the process.

Fortunately, those who walked away without tickets will have another chance. In the wake of the musical’s stunning critical and box-office success, a band of investors–including local artist and philanthropist Jack Stuppin–came forward to bankroll the play’s further evolution. With a mostly new cast of professional actors, Pfandler and company are preparing for a two-week run at Santa Rosa’s opulent Jackson Theater, followed by three weeks in San Francisco.

When asked what the next step might be if the San Francisco dates become sold-out–the very words are enough to send Pfandler into a dreamy reverie of grins and sighs–she affirms that the show, should it find an audience outside of the North Bay, will be taken farther abroad, and probably to the East Coast. (Did anyone say Broadway?)

“I love this story,” she says. “I think it’s so rich and so wonderful. Now we get to find out if other people agree.”

Borrowing from the colorful oral histories collected in Kann’s book, Pfandler concocted a story line in which an eager journalism student from Berkeley named Madison (played by San Francisco’s Elizabeth Bullard) uncovers an old press clipping that mentions the tarring and feathering of Eli Nitzberg, a socialist Jewish rancher from Petaluma. Recognizing a good story when she hears it, Madison ends up in Petaluma and soon integrates herself into the family of free-spirited Basha Singerman (Lynne Soffer), a descendant of Jewish immigrants who, having escaped the pogroms and anti-Semitism of Eastern Europe, established a thriving community in Sonoma County between 1915 and 1960.

As Basha prepares a steaming batch of chicken-foot soup, she spins a series of stories, brought to life by an ethereal chorus, whose members at various turns step down to embody the characters she describes. It all leads up to the public tarring and feathering of Nitzberg (Alby Kass), a larger-than-life idealist who, in 1935, was attacked by red-baiting vigilantes while assisting local migrant apple pickers to organize a strike for better wages.

Told with a projected background of actual historical photos and news clippings, Chutzpah!–think Our Town meets Fiddler on the Roof, with a dash of Julia Child’s Kitchen–is thrust along by the power of the music, from the Yiddish folksongs like “Ale Brider” and old Woody Guthrie classics, to authentic labor-movement marching songs and the occasional Irving Berlin tune. The show’s musical director is longtime West County Theater Arts Guild collaborator Sonia Tubridy, who–by an accident of fate–stumbled upon an old box dating back to the days of Eli Nitzberg.

“It was the music,” says Pfandler. “All the music, all the old lullabies and folksongs that the Jewish community in Petaluma pulled out and used whenever they came together to sing. It was phenomenal that we were able to get that.

“Magic,” it would seem, is also the right word to describe Pauline Pfandler.

Here are a few others: Opinionated. Passionate. Funny. Charming. Driven. Unapologetic and idealistic. After graduating from UCLA in 1979, Pfandler spent several years in San Francisco, working the fringes of the theater community before touching down in Minneapolis in 1983. There, she joined forces with a theater company known for unabashedly political shows dealing with poverty, social injustice, and nuclear proliferation. “These were plays that mattered,” says Pfandler.

After two years, Pfandler followed her instincts and relocated to Sonoma County, intent on establishing a theater company that could become a West Coast laboratory for developing socially significant theater pieces. That was 1986.

Since then, she’s mounted over 25 plays, adapting everything from Shakespeare and ancient Sumerian verse poems to a Washington, D.C.-version of The Threepenny Opera and the occasional Dr. Seuss story. In 1997 she formed the West County Theater Arts Guild, and established a studio office in the suite of rooms she rents from the Methodist Church in Sebastopol.

Then, a few years ago, in the wake of a spate of anti-Semitic and anti-gay attacks in the North Bay, Pfandler found herself committed to doing something about the rising tide of intolerance. During a roundtable discussion with a number of North Bay residents–many of them Jewish–Pfandler was told about Comrades and Chicken Ranchers by Kenneth Kann.

“I read it and said, ‘We’ve got to do this book!'” she says. “‘We’ve got to.’ I mean, compared to these people, I’m lamb girl,” she adds with a laugh. “I am not half the radical they were. It’s amazing what these people used to stand up and do. I knew I had to take those stories and turn them into a play.”

Pfandler’s excitement is infectious, and her cast of actors have caught the infection.

“It is an exciting play to be a part of,” acknowledges Alby Kass, taking a break with fellow cast members Bullard, Soffer, Wally Kass, Karen Hirst, and Nathan Place. “Knowing that this is real,” says Alby, “that these people actually lived, makes it especially exciting.”

“It’s more responsibility than an actor is normally trusted with,” adds Soffer. “That’s a challenge, but it’s also an enticement, to bring as much truth as we can to the project.”

Says Hirst, “What inspires me about these people we’re playing, is that they could disagree–about religion and all kinds of things–and yet could still hold their ideals and community together.”

“There’s an old joke about how if you have two Jews you’ll get three different opinions,” says Hass. “This was a community of Jews–some left-wing, some right-wing, some religious, some not–and still they kept the community together until the McCarthy era, when the liberals were finally forced out of the group.”

“It’s about a community,” says Bullard, “that somehow found a way to create a space for everybody.”

“So it’s a show with issues,” laughs Wally, “issues that, unfortunately, are very contemporary.”

“Yeah,” says Place, “and besides that, there are some kick-ass song and dance numbers.”

That said, Pfandler sends the cast back to work. After imbuing “Ale Brider” with the proper degree of roughness and believability, they move on to another Yiddish song, the fiery “Es Brent” (“It’s Burning”): “It’s burning, dear brothers, it’s burning / Oh, our poor little town is burning . . . And all of you are simply standing and looking / With your arms folded, as our little town burns.”

As the cast shift from the music to the action–preparing to stage the fabled tar and feathers scene–Pfandler offers a final observation.

“Every piece of theater is political,” she says. “Paul Robeson once said, ‘You’re either maintaining the status quo, or you are trying to change it.’

“We’re hoping to change it.”