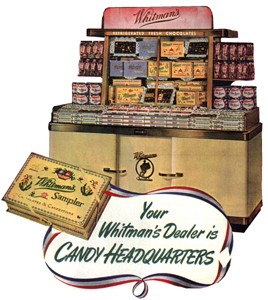 Candy Is Dandy: Some 240 Whitman’s Samplers are sold during the six minutes that the typical American male spends in, um, completion.

The famed Whitman’s Sampler is one solid pound of history

Valentine’s Day, that annual celebration of love, commitment and (hoped-for) Richter-scale sex, has, over the years, become inextricably linked to certain gift-giving traditions. Chief among them are the ritual swapping of heart-shaped paper-lace products, the offering of long-stemmed roses and the presentation of chocolate, chocolate and chocolate. These are customs we have grown fond of, and who can blame us?

Still, one must assume that such extravagances as flowers and chocolate were entirely absent from the thoughts of good St. Valentine on that cold Feb. 14 in Rome, A.D. 270, as the kindhearted priest was being bludgeoned and beheaded, his punishment for conducting illegal wartime weddings in bold defiance of rules set down by Claudius the Goth, the nasty Roman emperor who reportedly believed that matrimony made his warriors weak.

Now, no one knows what poor trembling Valentinus was thinking just then as the executioner’s sword was rudely slicing through his neck (“Hey, you know what would be good right now? Chocolate!“), but he probably could not have imagined that one day we’d all be celebrating that messy moment with Whitman’s Samplers. Yet every year, millions of us do just that.

Prior to Valentine’s life and death, the randy Romans honored the middle of February with a sexy celebration called Lupercalia, a high-spirited, libidinous love-fest involving the sacrificing of stray dogs and goats, the swapping of sexual partners and the gentle whipping of young maidens using romantic strips of bloody goat hide. It was to stop such pagan-pleasing antics that Pope Gelasius in A.D. 495 declared Lupercalia officially “out” and something new called St. Valentine’s Day officially “in.”

While this decision marked a definite upturn in the fortunes of local dogs and goats, it was an even greater boon to the enterprising candy makers of the future. There is no record of Pope Gelasius ever proclaiming “Let the chocolate addictions begin!” yet such endorsement must surely have been implied, because today Valentine’s Day is as tied to the giving of cacao-based confections as the Fourth of July is linked to fireworks.

On Feb. 14, without fail, millions of chocolates, boxed and beribboned and ready for love, will be handed from one sweetheart to another. As our collective calorie-consumption rate rises, every major candy maker in America–See’s, Cadbury, Ghiradelli, Willy Wonka–will vie for a piece of this action, facing off in a competition fierce enough to frighten off Claudius the Goth. By the 14th, our stores are brimming with a shimmering array of attractive, chocolate-packed gift boxes from which we all will have to choose.

And according to the company’s own statistics, most of us choose the Whitman’s Sampler.

Though popular enough year-round in its famous rectangular, stitching-topped incarnation, the Whitman’s Sampler is downright omnipresent come February, when the heart-shaped version makes its annual appearance. Last year, more than 4 million of the specialty samplers were sold, along with several million of the basic yellow box with the little tasting map inside (so you can tell the vanilla butter creams from the molasses chews). While the quality of the chocolates themselves may be no match for the hand-dipped art candies crafted by the new breed of small, boutique chocolate makers, mainstream America couldn’t care less. That yellow box is the clear favorite.

“The one-pound Whitman’s Sampler is the No. 1 selling box in America, and it has been ever since its inception,” proclaims John O’Hara, vice president of marketing for Russell Stover Candies Inc., which now owns Whitman’s. “We’ve figured out that, at the rate they sell today, someone buys a Whitman’s Sampler every 1.5 seconds. This includes all the different types of Whitman’s products, of course–the classic one-pound box, the Valentine heart-shaped box–all of them.”

By this reckoning, in the same time it takes to watch Lord of the Rings: The Return of the King, 8,040 Whitman’s Samplers will have changed hands somewhere in the world. Two hundred forty Samplers are sold during the six short minutes (according to Cosmopolitan magazine) that it takes the average American male to reach orgasm during sex, and 1,440,000 Whitman’s Samplers are sold over the average 600 hours the typical person spends engaged in having sex between the ages of 20 and 70. Though 600 hours might not seem like a whole lot of sex for one lifetime, it’s definitely one hell of a lot of chocolate.

The Whitman’s Sampler first appeared in 1912, but Stephen F. Whitman had been putting chocolates in boxes since long before the Civil War. The company was founded in 1842, making Whitman’s the oldest continuously operating chocolate company in America. An ambitious, marketing-savvy Quaker, Whitman was 19 when he opened Whitman’s Confectionery and Fruiterer Shoppe near the waterfront in Philadelphia. Twelve years later, after making a name as a seller of individual treats, he introduced his first box of candies: Whitman’s Choice Mixed Sugarplums, in a frilly pink container.

Seventy years later, with Whitman long dead but with Whitman’s Candies having become a major producer of chocolates, the first Sampler was born, the brainstorm of the company’s then president Walter P. Sharp. Legend has it that Sharp was inspired by an actual stitching sampler–a framed bit of fabric featuring various bravura stitching samples–that hung on the wall of his grandmother’s house. This explains the famous Whitman’s Sampler box cover, with the embossed faux stitching and the little needlework-esque flowers and birds.

“The Whitman’s Sampler is an important piece of America,” O’Hara says. “Everybody has an old Whitman’s Sampler somewhere–in their mom’s closet or their grandmother’s attic, filled with old buttons or photographs,” he says. “For some folks, it means an awful lot to get a box of candy, even today.”

Joan Freed, a Portland, Ore., writer, actress and self-described “chocolate obsessive,” adamantly agrees. “Growing up,” she says, “I always thought of Whitman’s Samplers as the classic Valentine’s Day gift.” Freed is the creator-performer of Chocolate Confessions, a long-running one-woman show about a chocolate shop owner named Coco Bliss and the, uh, sampler of customers she serves each day.

“When I was young,” Freed says, “I’d always dreamed that some boy I had a crush on would honor me with a big box of Whitman’s chocolate. Even as a girl, my fantasies were in chocolate!” Sadly, that Valentine’s Day fantasy never became reality, no doubt attributing to her staging a whole show about, to quote the posters, “life, love and chocolate.”

“There was one Valentine’s Day, though, years later,” Freed recalls, “when my son gave me a small Whitman’s box of chocolates. I was so thrilled! I still have the box.”

“Whitman’s is one of the great mainstream American chocolates, but the wonderful thing about the Whitman’s Sampler,” says Mickey McGowan, a Northern California dealer in collectible items and memorabilia, “is that it’s become a kind of multigenerational thread, weaving in and out of a family, grandparents giving them to grandkids, passing on warm associations. For most of us, the Whitman’s Sampler has always been there and it will always be there. A lot of people collect the boxes and keep them because of all the associated memories, some of which are associations to the chocolate and the rest are associations with love and family. The boxes are kind of beautiful.

“That said,” adds McGowan, “I’ve always been more of a See’s kind of guy, myself.”

Tom Ward, president and CEO of Russell Stover, talks about the Whitman’s Sampler in the same respectful tones that Superbowl coaches use to describe their star quarterback. His take is similar to McGowan’s.

“The biggest part of the Sampler tradition,” says Ward, “is the giving and receiving part, and the memories that go along with that. It’s all about tradition. After Christmas, our second biggest holiday is Valentine’s Day, and the tradition of the Whitman’s Sampler is a huge part of that. There’s a lot of emotion and romance involved in the giving of chocolates on Valentine’s Day.”

With a chuckle he adds, “Though sometimes I think people hope to get a little more out a $9 box of candy than they end up getting.”