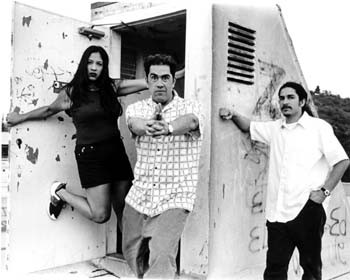 Fear of a Brown Planet

Satire is the weapon of choice for the Chicano Secret Service

“A SATIRIC PIECE in the Times is one thing, but bricks and baseball bats really get to the point,” Woody Allen observed when discussing neo-Nazis during a cocktail conversation in his film Manhattan.

The members of the Chicano Secret Service would disagree with the kvetching auteur. Satire is the weapon of choice for this three-person sketch comedy troupe, and it’s one they plan to use with devastating effect when they bring their sociopolitical comedy Fear of a Brown Planet to Sonoma State University on Cinco de Mayo.

“Satire is able to put out issues that, if they were addressed pointblank, would just shut people off. Satire puts a twist on everything and opens up people’s minds,” says the group’s co-founder Tomas Carrasco, 37, who is quick to add that his troupe doesn’t sugar-coat the issues, but rather let’s them in the backdoor with a hearty guffaw.

“It’s more of a sneak attack,” he says. “It’s funny to make fun of serious things.”

Founded 12 years ago when Carrasco and collaborator Elias Serna were students at UC in Berkeley, the Chicano Secret Service was born as a pointed response to President Reagan’s “Decade of the Docile Hispanic.”

With the addition of Carrasco’s sister Susan in the mid-1990s, the group has continued delivering comedy to venues as farflung as Tijuana’s Festival Internacional de la Raza, New York City’s HBO Comedy Festival, and colleges such as Yale and Notre Dame.

The group honed its skills with the guidance of noted playwright and activist Luis Valdez and his El Teatro Campesino. Other influences include the San Francisco Mime Troupe and “Chicano art godfather” Rene Yanez, whom they credit in their promotional literature with showing them “the ropes on how not to get ripped off in the low-paying, high-profile, back-stabbing, Eurocentric, classist world of American Theatre.” (“But it’s all gooood,” they say, winking.)

“People have said we are like a combination of Teatro Campesino, Monty Python, and Saturday Night Live, which I take as a compliment,” says Carrasco. “I think sketch comedy is a natural outlet for us. The bottom line is that we’re acting out jokes.”

“With the political atmosphere at the time, there was lots of craziness and big changes going on, which was a very satirical situation,” he says. “It was so funny in and of itself that sketch comedy and satire were just a very natural way to comment on the times.”

But the current political milieu also provides Carrasco and company with plenty of targets. Among the hot-button issues they tackle are California’s recent slate of voter-approved propositions, including Prop. 187 (which denies illegal immigrants medical care, schooling, and other government services) and the controversial Three Strikes law.

“In the ’60s our youth were being sent to Vietnam. In the year 2000, all of our youth are going to jail,” Carrasco says. “There’s a large population of the Latino community in jail, and that’s a harsh reality. It’s really weird to deal with it because it seems like it’s being done so underhandedly.

“Extreme laws such as the Three Strikes law are affecting a lot of communities,” he continues. “People are just disappearing. It’s serious and sad, but you’ve just got to laugh and ask, ‘What’s going to come next?’ ”

THE MEMBERS of the Chicano Secret Service have long labored to put Mexican-Americans and Latino culture as a whole onto the map of the American media landscape.

Both Carrasco and Serna are currently producing their own films. Serna occasionally accepts commercial acting jobs, though he refuses to play stereotypical Chicano characters. Upon returning to Los Angeles after college, the Chicano Secret Service fielded interest from television producers intent on packaging their talents in a sitcom, but the project floundered.

“Hollywood really wasn’t receptive to our political humor and us as Mexican-Americans, or Chicanos,” says Carrasco, who has since worked with stage and film sensation John Leguizamo.

“It’s hard for them to deal with ‘smart’ Mexicans. What we were presenting must have been a radical image of Chicanos to them,” he says laughing, then asks rhetorically, “Where are the regular Chicanos, the regular Mexicans that have jobs and go to school and have good lives? If we’re acknowledged in the [entertainment industry] at all, it’s always an extreme. We’re always cholos.”

“The are 4 million Mexicans in Los Angeles, and you would think there were none if you looked at what Hollywood produces,” he suggests. “We make fun of all that kind of stuff in various sketches.”

PAIRING LIVE action and video sequences, Fear of a Brown Planet is a series of sketches chronicling the exploits of a superhero named Zeta, whose mission is to “liberate all oppressed people in the City of Hate,” a thinly veiled Los Angeles.

The futuristic character tackles California’s politics with Chicano-inspired riffs on such icons of American culture as the Wizard of Oz, Judge Judy, and CNN (reimagined by the troupe as the Chicano News Network). He also battles the president of the Caucasian Alpha Caucasian Association, or CACA, an elitist Hispanic “who believes she has effectively pulled herself up by her huarache straps.”

“I hate to call it intellectual comedy,” says Carrasco, who lists “an audience with a mind” as part of the troupe’s technical requirements.

Among the group’s other requirements: baseball bats to ward off “right-wing, Nazi Republicans,” who occasionally take umbrage at their show.

“At clubs, everybody is drunk and wants caca-peepee jokes,” observes Carrasco, who is confident that local audiences will relate to his company’s offbeat comedy, which the group customizes to match the local political environment.

“Every town,” says Carrasco, “has a totally liberal cool politician and an asshole right-winger.”