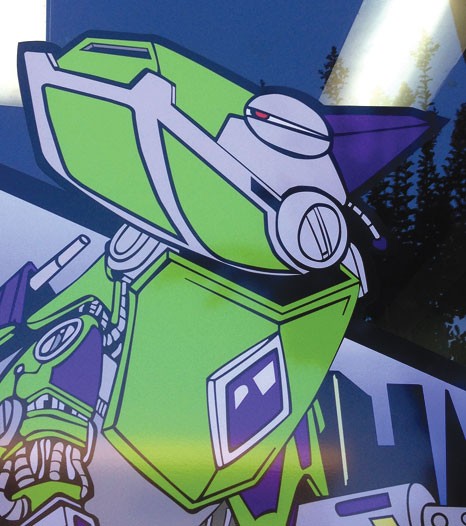 Take a tasty, sweet iced tea with milk and throw a bunch of chewy, dark, mostly flavorless tapioca balls in the bottom of it, serve it with a huge straw and watch the balls shoot up into your mouth like a pneumatic tube system. Yes, boba is weird. But it’s strangely addicting.

Bubble milk tea, as it’s also known, is wildly popular in the Asian community, which is why it’s surprising to see a boba cafe pop up in Rohnert Park, a city not known for its diversity. The owners of Tea Rex say they opened it because they were “tired of driving an hour for boba,” since their closest options are in the East Bay or San Francisco. So last year they opened a place themselves. The vibe of the cafe is youthful, with a green and purple color scheme and weapon-wearing dinosaurs reminiscent of the 1980s cartoon series Dino Riders.

Drinks include sweet fruity options, like honeydew and kiwi, to jasmine milk tea and iced coffee, each with a variety of boba available. There’s food too. The Vietnamese bahn mi sandwiches are hearty, packing enough calories to feed two people for less than $5. Consider the meat bahn mi: head cheese, rich pâté, mayo and pickled veggies on a big, flaky soft roll. If the head cheese and pâté combination isn’t for you, there’s a vegetarian option as well. Best bet for snackage may be the fresh waffles—a wonderful accompaniment to the sweet, strange, deliciously chewy tea.