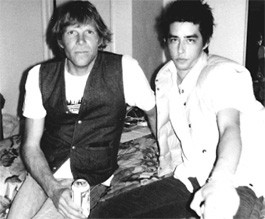 The Skinny Singers are skinny but they aren’t brothers. Yet the newly formed duo–Sacramento singing sensation Jackie Greene and Chico’s favorite veteran road warrior, Tim Bluhm of the Mother Hips–seem closer than most. Whether witnessing their playful joshing, comedic telepathy or Bluhm’s pseudo-paternal guidance, it’s hardly surprising that only a year’s acquaintance has spawned a fury of collaborative songwriting, countless future recordings and an inaugural tour. I caught up with the prolific pair via phone before they kicked off their spontaneous, 10-city West Coast jaunt in Santa Barbara. They appear Dec. 27 at the Sweetwater Saloon in Mill Valley.

The Bohemian: How did this tour come about?

Bluhm: Jackie and I met in New York City last year and started hanging out, playing some music. We actually live pretty close by and just wanted to start a new band.

Greene: We did a show up in Sacramento where we took Hips’ songs and Jackie Greene songs and twisted them around with some different flavors. To a certain extent, the Skinny Singers is a take-off of that, but we’re a little more coherent this time.

Were you surprised by the immediate chemistry?

Bluhm: Yeah, I was. Songwriting’s kind of a private thing, but Jackie and I hit it off really well. I think we have similar tastes and we admire each other’s songwriting a lot.

Jackie, did you grow up listening to the Hips?

Greene: I did. I always was and still am a big fan. It’s basically getting to do shows and be in a band with one of your favorite songwriters. It was weird when we first started hanging out, because I was actually a bit star-struck, which doesn’t happen to me very often.

Bluhm: Yeah, he quickly got over that.

Tim, it seems you and the Hips are relishing your independence the last few years.

Bluhm: About four years ago we took a hard look at what was happening in our careers and our lives. We just decided that not only did we need some time away, but when we got back together we should do so to have fun–only. Doing a cover album of [Neil Young’s] Everybody Knows This Is Nowhere is a perfect example. It was really fun to learn the songs and fake the album cover. I just laughed a lot. Those kinds of things are where it’s at for me, and that has a lot to do with what Jackie and I are doing.

After being abruptly dropped from American Recordings in ’97, would you ever consider a major label again?

Bluhm: Oh, yeah, we’d definitely consider it. Our experience wasn’t all that great, but we learned a lot. I have a much different perspective on how I operate my business and how I live my life. I’d consider it, but it wouldn’t be the answer to all my prayers.

Greene: The record before that was pretty much a solo record, but I like rock and roll, so I wrote songs that were sort of geared toward that. All you can really do is what moves you, whatever turns you on.

Greene: Lyrically, it’s a bit more, dare I say, socially conscious. I’m not really an overtly political kind of a person or writer, but there are some statements that might catch people’s attention. In terms of its sound, I haven’t really discovered that part of it yet. Tim came down to L.A. for some sessions. I want to get him to play guitar, sing, play a Game Boy. (laughs)

Bluhm: I don’t know how to do that. (laughs)

Tim’s website features photos of your home studio in Sacramento. Are you recording some of it there?

Greene: The label probably won’t let me get away with that. We’re both really into analogue tape machines and all these home-recording techniques. I mean I’d love to, but I probably wouldn’t be able to convince anybody in a suit in New York.

The Hips have really embraced the direct fan contact that downloading allows. What do you guys make of this whole industry shift?

Bluhm: Jackie and I are in pretty distinctly different situations; he’s on a major label and I’m not. It behooves the Hips to get our music out there, even if it doesn’t actually earn us money. We’ve always let people bootleg our shows anyway, so giving away music is nothing new to us. We make most of our money playing live shows. I wish we made more money selling records, but it’s just a small portion.

Greene: I’m exactly the same way, except I don’t make any money selling records. In fact, I owe way more money. We also allow people to record our shows, and it’s stupid not to embrace the digital downloading ideal. It’s obvious the customers have chosen how they want to receive their music, and if the majors were to embrace that fully, it would solve a lot of issues. I always encourage people to share, even burning songs on a CD for your friends. The bottom line is getting people to your shows. That’s where bands like the Hips and mine make our living. We’re not Madonna, we’re not U2, and we don’t sell millions of records. That’d be wonderful, but it’s not the reality.

Do you feel any added pressure with diminishing major-label fostering?