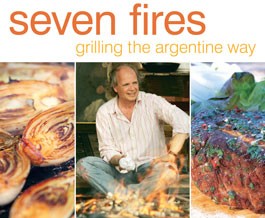 I’ve always enjoyed casual conversation and rarely been averse to chewing on a nice hunk of fat. But the expression “chew the fat” never resonated with me, until some mochileros showed me the phrase’s literal meaning.

The mochileros are a tribe of Argentine wanderers (“mochila” means backpack) who camp their way across some of the finer parts of the landscape, banding together around the fire by evening to drink maté, play guitar and plan the next day’s adventures. It was next to one such fire, under a starry night in San Martin, that I finally understood fat chewing.

A piece of meat had been cooked over wood coals. Red wine was flowing. There was a bowl of salad, a loaf of bread and everyone ate his share. As we lingered in our joyous, collective afterglow, I sat there literally chewing the fat with the muchileros as I gnawed on a bone to which a glob of fatty material was attached. Several times I put my bone back on the grill to heat up and re-melt. The matrix of fat and connective tissue attached to that bone continued to surrender flavor as I chewed.

I imagine language evolved in ancient scenes like this, around the same fires that hardened the spears and cooked the meat of our ancestors, while keeping away the wolves. They chewed the fat, told stories, worked on their communication skills and planned the next day’s adventures.

In addition to stimulating conversation, some anthropologists believe that cooking food facilitated human brain development by increasing the efficiency with which calories are extracted from food. Because cooking produces soft, energy-rich foods, fewer calories are spent in digestive efforts, leaving a higher margin of caloric recovery. This supposedly allowed our brains, the most energy-intensive organ we have, to grow.

Though fire was the original stove, today’s cooks have largely left it behind. With the loss of fire, we’ve also lost touch with the feelings and flavors associated with it. But fire remains available, at our service, a genie in a bottle that can be conjured anywhere, anytime. And when we do, the experience of tending hot coals takes us to an archetypal place of smoke and ash—things, by the way, that we’re now told are carcinogenic.

In his recent cookbook, Seven Fires: Grilling the Argentine Way, Argentine chef Francis Mallmann writes: “I adore dissonance in food—two tastes fighting each other. It wakes up your palate and surprises you. . . . The right amount of burning or charring can be delicious and seductive: a burnt tomato, for example, has a dark crust bordering on bitter, while the inside is soft and gentle in texture and taste.”

Applying the right amounts of smoke and fire to your food is a delicate act, and easy to overdo. You want these harsh flavors to be team players and not take over.

One common rookie maneuver is to start cooking before the fire completely burns down to coals. This exposes your food to licking flames that can char the food and make the smoke flavors too strong. Start the fire about an hour before you want to cook. Spread the coals evenly under your grill grate and wait for them to develop a layer of white ash.

Some woods burn hot and quickly, some have sweet smoke and some throw a lot of sparks. Hardwoods are generally better for cooking than are soft woods. Wood from fruit trees is a safe bet, although, true to form, chokecherry wood has bitter smoke. Cherry, on the other hand, is one of the best, burning hot without too much flame and producing a sweet smoke. Apple is right up there with cherry. Hickory, alder and mesquite are common, good options. Whichever wood you use must be fully dry.

Your meat should be at room temperature, seasoned with salt and pepper. Some meat cooks love their marinades. But I say if you have good meat, you should be able to taste it. If anything, I’ll serve my simply cooked meat with a sauce. Lately I’ve been into chimichurri, an Argentine garlic and herb vinaigrette.

Chimichurri is best prepared a day ahead so the flavors can develop. It will continue to age nicely for a few days in the fridge. Applied to fire-cooked meat, the spicy, oily, acidic fragrance of the chimichurri interacts with the slightly crispy, slightly smoky, slightly charred exterior of the meat to create the kind of harmonic dissonance that would make Mallmann cry.

To make chimichurri, dissolve one tablespoon of coarse salt into a cup of water. Chop a head of garlic, a cup of fresh parsley and 1/4 cup fresh or dried oregano (or marjoram) and add it all to a blender. Blend, adding 1/4 cup red wine vinegar and then 1/2 cup olive oil. Finally, blend in the salt water. Transfer to a jar with a tight-fitting lid and keep in the refrigerator.

When your coals have burned down and you’re ready to cook, make sure the grill grate is clean, and oil it with a piece of fat or an oil-soaked paper towel. You should be able to hold your hand at grill level—a distance of two to four inches from the coals—for about two seconds before the heat forces it away. The meat should sizzle when it hits the grill.

(The following instructions are intended for this hot of a grill, and for an inch-and-a-half-thick steak. Adjust the times appropriately to your conditions.)After five minutes, lift the steak and rotate 90 degrees. This prevents overburning by the hot, metal grate. After four more minutes, turn the steak over and repeat the process, turning 90 degrees after five minutes. After that final turning, it’s two minutes to medium rare.

Chewing the fat continues to guide and reflect human evolution. As the primal act of cooking with fire contrasts with the newer, sophisticated arts of wine and sauce making, a harmonic dissonance develops. It’s even better than a burned tomato.