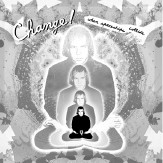 One and Only: Friends think McEvoy should can his lead singer.

There are a lot of ways one could describe Change!, but the most accurate and least opinionated would be to call the band polarizing. I would bet cash money that you will not hear one album remotely like Change!’s When Spaceships Collide this year, and I am not a gambling woman.

Change! is the musical world of Aaron McEvoy. In this world, a giant, 134-stringed wood-hammered dulcimer–chiming, melodic and evocative of whimsical folklore–is the focal instrument of rock songs. Juxtapose this with McEvoy’s un-dulcimer-like vocals and lyrics with a heavily fantastical slant, and you get a band who defy recognizable genres. But after the initial shock of geeky dulcimer weirdness wears off, the offbeat beauty of Change! reveals itself; the patient and unbiased listener will discover rewarding and keenly crafted pop songs.

When Spaceships Collide was written over a five- to six-year period, during which McEvoy lived in New York, Texas and California. Now settled in Napa, McEvoy, like many musicians, wears multiple hats; he runs the record label Mental Monkey and has a young daughter (our interview was conducted as she napped).

McEvoy settled on the name Change! while traveling through Italy in 1999, when he spied a sign on a currency exchange booth. “I have found it versatile enough to umbrella over all the various incarnations of the band,” he says. Though Change!’s recordings feature other musicians (including Mental Monkey label mates Mixel Pixel and Midstates), McEvoy currently performs solo shows with the dulcimer, an iPod and a theremin. For an audience member not knowing what to expect, the sight of the gigantic dulcimer, combined with McEvoy’s animated onstage persona and atypical lyrical approach, can be disarming–though this combination can result in riveting, if tense, performances.

“I find that my performances really push people’s buttons in different ways,” McEvoy says. “I’ve had performances where I’ve worried about my personal safety. There have been folks who have thrown firecrackers at me and wrestled for my microphone. I recently ended a show in Oakland midsong because two drunk idiots collided with my instruments during a wrestling match.”

McEvoy, who has been performing in front of crowds in various musical contexts since he was in first grade, is well aware of the distinctiveness of his singing style, which he says is inspired by the likes of Robyn Hitchcock, Syd Barrett and David Bowie. “I have a very flexible voice, and could easily sound like John Denver or Aladdin if I wanted,” he says. “I have a flamboyant tendency deep inside, which I like expressing lyrically and vocally. Some people love [my voice] and some hate it. I’ve had friends hear my recordings and tell me that I need to can the lead singer.”

But that affected voice, which is at turns childish and sing-songy, both suits and obscures the surreal, psychedelic poeticism of McEvoy’s lyrics. “Le Sad Cassetto,” a jagged and darkly funny ditty about horrific headphone paranoia, rests on the goofy end of the spectrum, while the dance beat of “My Sadness Is a Special Thing” belies the ache and longing at the root of so many rock songs.

“I am willing to write about any topic, as I find that all things are generally equal in this universe,” says McEvoy. (It is worth noting that he once wrote a song about an indecisive man who rolled a Dungeons and Dragons decahedron–a 10-sided die–to determine if he should marry a woman or not.) “I guess in the end, I just have my own process of mixing my life experiences and my imagination to produce songs.”

After living in Indiana, Delaware, New York City, Austin and various Bay Area locations, McEvoy finds the people of Napa “very interested and supportive. I like playing in small towns, as I feel that they often have more to fight for, in terms of freedoms of thought and sound. I have enjoyed the food, culture and musicians that I have met in Oakland and Berkeley, but feel that places like San Mateo and Napa have taught me more about what it means to be Californian.”