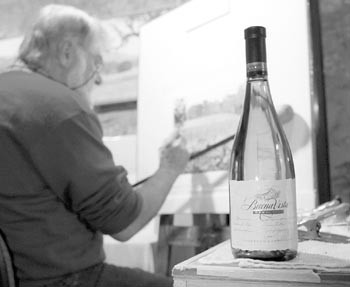 Carneros wine appellation is a tale of two counties

He’s a real nowhere man Living in a nowhere land . . .

JOHN LENNON and Paul McCartney were not conjuring a vintner from the Carneros wine-growing region when they penned their 1965 hit single “Nowhere Man.” But they could have been. The Carneros district straddles the extreme southern reaches of Sonoma and Napa counties, following San Pablo Bay from east to west. Viewed from the south, it begins some 40 miles north of San Francisco.

Flatlands and gently sloping hills define the terrain. Unlike the gentrified tourist magnet that Napa Valley has become, Carneros has no swank boutiques or trendy trattorias. Heck, it doesn’t even have a town.

What this agricultural area does have is row upon row of grapevines–some 6,500 acres of vineyard land, at last count. And Carneros grapes are among the most sought-after in all of California, because they make wines that are consistently adjudged among the finest in the state.

According to the Carneros Quality Alliance, a group of vintners dedicated to defining and perpetuating the special character of the region, 48 percent of Carneros grapes are chardonnay, 32 percent are pinot noir, 6 percent are cabernet sauvignon, 5 percent are merlot, and 9 percent are various other varietals.

Grapes have been grown there since the mid-1800s, and the first real spurt of planting came after the repeal of Prohibition, when pioneer North Coast winemaking families like Martini and Beaulieu undertook significant vineyard projects.

At that time, it wasn’t unusual for grape growers to have cattle ranchers and sheepherders as neighbors. In fact–and perhaps providing the answer to the question, Which came first, the grape or the sheep?–carneros is the Spanish word for sheep.

While grapes have been grown in the area for decades, the first winemaking facility to be constructed there since Prohibition was Carneros Creek Winery, founded in 1972.

The largest estate grower is Buena Vista Winery, which planted its vineyards during the 1970s. Acacia Winery was founded in 1979 as an appellation-specific winery–four years before Carneros gained its official appellation status.

What attracted these and other winemaking concerns to the region?

“Perhaps the two most important influences on [Carneros vineyards] are the soil and the proximity of San Francisco Bay and the Pacific Ocean,” she says.

“The soil is shallow and dense with high clay content, which makes it harder for a vine to establish a root system, so it yields smaller, more flavorful grapes. The ocean breezes keep our summers cooler and our winters more mild than other parts of Napa and Sonoma.”

Through the work of Carneros Creek co-founder Francis Mahoney and researchers from UC Davis, clonal selections best suited for Carneros were identified and planted, thus establishing the area as prime pinot noir territory.

Mahoney had much earlier developed an affinity for the wines of Burgundy, so it was no surprise that he would gravitate to an area ideally suited for growing Burgundy’s two noble grapes: pinot noir and chardonnay.

While most appellations are known for a certain spectrum of aroma and flavor components, Carneros wines tend to be much more consistent across the board and thus more readily identifiable.

Pinot noir, in particular, thrives in Carneros because it is a varietal that enjoys hardship. When the soil is shallow, the climate is cold, and fog shelters the sun for hours at a time, the delicate pinot grape responds by transforming into wine with layers of subtle flavors and refined elegance.

Because climatic conditions allow for full ripening of the grapes, Carneros pinots also tend to be perfectly balanced, making them enjoyable in their youth but also capable of long-term aging.

Since chardonnay and pinot noir are the most common varietals, it should come as no surprise that Carneros is also known for its sparkling wines.

Champagne Taittinger president Claude Taittinger visited Carneros as a young man and made note of the area’s potential for sparkling wines. In 1989 he founded Domaine Carneros, then and still considered one of the jewels of the region.

Codorniu Napa, Gloria Ferrer, Domaine Chandon, and Mumm Napa Valley are other makers of sparkling wine that have set up shop in or purchase grapes from Carneros.

And what better beverage than sparkling wine to accompany our opus-ending toast? So:

Here’s to a place unspoiled by urban sprawl, a place with no borders, a place you won’t find on a map.