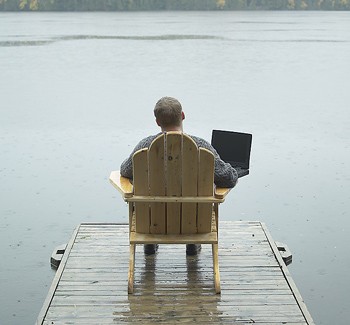 Bock of the Day: Enjoying a frosty beverage dockside, idling away on the laptop–the future of the last generation.

Careers of the future involve lots and lots of . . . service, sorry

In years past, the class of 2010 might have been expected to get a career on the moon or at least commute to work in flying cars. While students beginning college this fall may have to wait a while longer to work on Mars, they can still expect an array of out-of-this-world, as well as more down-to-earth, career opportunities upon graduation in a time long synonymous with that far-off concept of “the future.”

Without the help of a few good psychics, it’s impossible to predict exactly what will become of the local and national economy over the next several years. However, informed speculation warrants a closer look at the possibilities (especially if you’ll be one of the many student-cum-unemployed looking for a job at the decade’s end).

According to Time magazine, a number of jobs will appear out of the ether while others will vanish. It remains to be seen who should be most worried, those on the outs (stockbrokers, mail carriers, orthodontists, prison guards and fathers) or those on the way in (tissue engineers, Frankenfood monitors, virtual-reality actors or data miners).

In case you’ve been tapped to take a trip to the Island, don’t fret. Can anyone really imagine a future without orthodontists?

According to theoretical physicist and futurist Michio Kaku, author of Visions, civilization will say goodbye to video-store clerks and hello to more chauffeurs and forest rangers (among the expected future careers in information services and software). Does this mean it’s a better idea to apply to be a driver or the president of Netflix than just about anything else? The jobs of the future will, according to Kaku, of necessity have a strong focus on technological developments.

“The real winners of the 21st century will be those nations who invest strategically in science and technology,” Kaku says in Visions. “After World War II, Germany and Japan, for example, were able to complete one of the most successful recoveries in history. One reason why this was possible was that their best and brightest were not working on hydrogen bombs, but on better cars and transistor radios. In the United States, the best scientific minds are often absorbed by the Pentagon, which uses their talents on new generations of weapons. Even redirecting a tiny percentage of the military budget to pure science could have a profound effect on the development of technology.”

Future careers will be responsive not only to basic needs, but also to the elaborate desires of an increasingly materialistic society. In the ’80s, it was the Walkman; now, it’s the iPod. Perhaps in five years, it will be subcranial implants blasting Gwen Stefani’s latest in honor of the fifth anniversary of Harajuku Lovers Tour. Whether Gwen is being implanted into your head or not, folks around the world will likely want more, more, more. And with Ms. Stefani in your noggin, who wouldn’t?

Only time will tell what the specifics of the jobs of the future will be, but there are many people who feel the trends of what society needs tomorrow can be found by looking at the nation today. Futurists observe these trends, some putting forward a grab-bag of career likelihoods of the not-so-distant future.

Glen Hiemstra of Futurist.com, for example, believes tomorrow’s careers will be involved with technological development and the need to respond to demographic shifts. He also believes there will be an emphasis on jobs that help society’s organizations adapt.

While it doesn’t take too much of a leap to see that some current careers, such as being a teacher for instance, could already trump that of the euphemistic-sounding “learning evangelist” of the future, Wilkinson makes a valuable point in demonstrating that bringing people together, surfing change and understanding trends will be important aspects of the increasingly evolving landscape of the business world.

As technology changes and the economy ebbs and flows, an array of alterations to the job forecast will inevitably take place. One need only think back to the dotcom boom (and bust) to see how globalism will continue to influence jobs here in the North Bay and around the world.

Locally, with the leveling out of the online-world-as-local-industry, the continued proliferation of viticulture and the increasing gentrification of everything north of the Golden Gate, locals who can stay local will likely be facing an increasingly competitive job market where specialized education and experience are at a premium.

One field destined to expand is health. Stephanie Thompson, director of workforce and economic development for Santa Rosa Junior College, says that with baby boomers retiring over the next several years, such an expansion is “not a surprise.”

“It’s not just nurses; it’s everything from medical assistants all the way up the continuum of the field,” she says.

Thompson predicts that another major trend in new careers will be those related to development, financial services, retail and the hospitality industry. “While some of these jobs may start out paying lower wages, there is the opportunity for advancement to management later,” she adds.

Thompson says that the hospitality industry will continue to be “huge” in the North Bay’s future. “It’s everything from hotel management, to culinary management, to food and beverage and everything in between.”

Thompson is skeptical about the ongoing recovery of the high-tech industry, but adds that signs of the increasing viability of biotech as a local industry are on the rise, as is the creation of medical devices.

Whether one is a data miner, tissue engineer or plumber, basic interpersonal, written and oral communication skills (get out your résumés, people) will rank–and sometimes supercede–education and possibly even experience in the job market of today and 2010. Mom was right: It pays to be nice–now and in the future. Information, technology and service jobs, by all accounts, will be on the increase over the next five years. But a person doesn’t need to listen to the latest psychobabble to know that when it comes to careers, doing what you love will always be the most profitable on all levels.

While it seems that most of the career prospects for the class of 2010 will be somewhere in between the rock quarry of Fred Flintstone and George Jetson’s old haunt, the famed Spacely Sprockets, in the time-honored American tradition, the class of 2010 will have its choice of a number of both fascinating and mind-numbing careers.