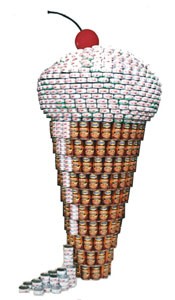 Cherry on Top: Recent Canstruction efforts include this cone constructed of baked beans and tuna cans.

Gordon Huether is sitting on 4,000 cans of sardines. He’s not planning on eating a single one of the oily little fish. Not yet, at least.

Huether, who is both a sculptor and now, it seems, a fishmonger, also happens to be a contestant in a rather unlikely collision of food, art and really painful puns. “Canstruction: One CAN Build a Solution to Hunger,” an exhibit opening Nov. 11 at COPIA, is the North Bay’s first annual can-building competition. Yes, can-building. Competitors are challenged to create structurally sound and reasonably recognizable structures like, perhaps, a hot dog, or in Huether’s case, a small city, using between 1,000 and 13,000 unopened cans of food. In January, the structures will be carefully dissembled and the cans distributed to local food banks.

More than just artistic weirdness or misplaced adoration for tinned foods, the idea for the can-stacking competition stemmed, as many good ideas do, from a happy accident. In 1998, after doing a rather uninspired job of collecting donations for a local food bank, the Seattle chapter of the Society for Design Administration decided to do something a little more interesting than just bagging up their cans and sending them along to the hungry.

Being creative, as designers are wont to be, the group built a topographic map of the state of Washington from cans. Media gushing ensued, a competition among designers and architects was born and a nonprofit was established.

According to Canstruction founder and organizer Cheri C. Melillo–who has kept her day job in design and architecture, administrating this nonprofit on the side–Canstruction competitions have collected more than 3 million pounds of food since 2003 for an estimated 1 million pounds each year. This year, nearly 50 Canstruction competitions have been held in cities throughout the United States and Canada. That’s a lot of fish, beans, soup and vegetables.

Contestants are encouraged to choose their own food, whether for the size and shape of the cans, the color of the label or how the products will combine to make a complete dish or meal. Melillo says that one of her favorite past winners, a mustard bottle, incorporated the yellow labels of canned mustard greens, making for both a nutritious and appealing final product.

Huether, however, is thinking outside the can. He says he chose the sardine cans primarily for their shape. “I was turned off by the labels,” he says, which he plans to remove so only the silver of the can shows in his final display.

He describes his piece, titled One Sardine Is Not Enough, as a sort of fishy homage to Hillary Clinton’s It Takes a Village concept, saying that it takes more than one person to put a dent in the problem of hunger and that it would be really hard to do if we were all sardines. (Frankly, I think we were both a little fuzzy on the details.) But Huether was crystal clear with his desire to help, ponying up the cost of the sardines, as well as the time spent by his team, primarily composed of staffers from his Napa art studio, on the project.

The question remains: How many sardines can anyone–even the hungry–really eat?

Huether takes a rather sanguine look at the whole thing. “OK, the food banks were a little wary about the sardines,” he admits. “They weren’t sure how useful they would be. But my response is that sardines are an acquired taste, and with that many [cans], people will definitely acquire a taste. If not, they could put them in a blender and make sardine spread,” he says. “Throw a few capers on them and, hey, it’s just like downtown.”

Actually, in talking to Melillo, who’s been working with Second Harvest food banks across the country for the last 12 years, one discovers that sardines aren’t that bad after all. In fact, she says, they’re high in protein, something that the food banks don’t often receive from donors. “You see pallets stacked eight feet high with junk food, but they need protein and vegetables. They love tuna, sardines and vegetables,” she says.

Another recent surprise hit was a Canstruction project made entirely of coffee. “We weren’t sure the food banks would want it, but they loved it. Sometimes that’s all they can give people–a hot cup of coffee–to get them warmed up and going again. They were thrilled,” Melillo says.

Huether–who is known more for soaring steel and glass creations that occupy airports, BART stations, the Artesa Winery, museums, hospitals, public spaces, universities, business campuses and art preserves than for his fish-stacking ability–is just one of several designers, architects and engineers asked to can-tribute to this charity event.

Neil Harvey, curator of exhibitions at COPIA, explains, “Canstruction involves food and art that serves a great cause. It’s a perfect fit for COPIA in many ways, creating art through the unique architecture of canned goods, while raising awareness and providing food to those in need.” Other participants include San Francisco’s Academy of Art, the UC Berkeley student chapter of the Associated General Contractors of America, and several architectural and design firms from the Bay Area.

Winners of the competition will be announced on the evening of Nov. 10, with awards given, among others, for the best use of labels, best use of products that could make a dish or a complete meal, and structural ingenuity, which Melillo says can sometimes be a challenge. Rules dictate that the structures can only be held together with tape, wire, cardboard or rubber bands. “Oh, they fall all the time,” she chuckles. “People back into them at the last minute, people sit on them–oh, and the worst is when some kid just pulls out a can and the whole thing comes crashing down.”

More soberly–and COPIA is ensuring that no one will be caught in a tin can avalanche–Melillo’s organization espouses a poetic goal, “It starts with one can. To feed the hungry. To lift the spirit. To change the world.”