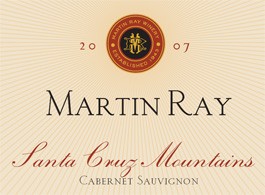 Cab from Martin Ray and Friends

Plenty of wineries sport two or three price points within their selection, often starting from a California appellation and heading into the hills from there. What’s exciting about this outfit is that their value brand often hails from sought-after AVAs like Russian River Valley or the Stags Leap District of Napa Valley. Namesake Martin Ray, long gone to toast his vintner, was a pioneer in post-Prohibition winemaking, keen on besting French wines using French techniques. Current owner Courtney Benham deftly places his eponymous brand in the middle, while Angeline rounds it out with everyday prices coupled with steady quality. Wines were tasted in the order listed, not blind, and scored on a scale of 1 to 5 stars.

Angeline 2009 Alexander Valley Cabernet Sauvignon ($18) No time wasted getting this young Cab to market. With bright plum, sharpie and violet aromas, and a lively, thin palate of blackberry punch, it’s easy to sip but doesn’t endear itself on the finish: tannin out of proportion with an otherwise agreeable gulper. ♦♦♦

Angeline 2008 Stags Leap District Cabernet Sauvignon ($18.99) Also bright at first sip, but with more typical Cab character, this was nuanced with prune, sandalwood, cedar and warm brown spice. A favorite of the tasting, it was the first bottle finished in the aftermath. ♦♦♦♦

Martin Ray 2008 Diamond Mountain Cabernet Sauvignon ($55) Beef burgundy—or was that just my food pairing on the stove? With raspberry, plum aromas, and buttery, herbal notes of marjoram, tobacco and milk chocolate, this was among the more refined of the bunch. ♦♦♦♦

Martin Ray 2007 Santa Cruz Mountains Cabernet Sauvignon ($45) Whether it’s chocolate mint, thyme or dried parsley, the cool, herbal aromas of this deeply colored wine lead to mouth-tingling flavors of smoked meat and black cherry, while not finishing hot; with a fine-grained finish, this Cab from the late Mr. Ray’s own stomping ground seems like the one with the best future. ♦♦♦♦