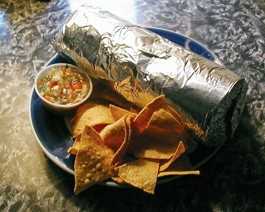 For the first few weeks of freshman year, the freedom of choice offered by the many stations in our college cafeteria seemed exhilarating, but after the novelty wore off, the selection got monotonous. I learned a few tricks to keep from breaking down in tears when faced with yet another night of spaghetti with marinara. The most important one? Sometimes it is best to get off-campus and head for burritos.

The burrito is a California trend that has since spread to the rest of the country, and for us native burrito fans, there’s no place like home. But why are they so appealing to college students in particular?

“Students are hungry, growing and active, and burritos are very tasty, filling and affordable,” says Greg Maples, founder and president of the Bay Area chain High-Tech Burrito. “Kids like them. They’re running from place to place, and they can get a burrito and go.”

Maples also cites the shift in burrito cuisine toward healthier ingredients as a factor in the appeal burritos hold for students. Many burrito chains tout healthier menus and a “green” approach to cooking. “Young people can understand that,” says Maples.

While burritos have distinctly Mexican origins, they are an American creation that has little to do with actual Mexican food. The ancient Aztec culture was the first to eat what resembled our current burritos, which weren’t seen again until the 1800s. There are different folktales that tell of the birth of the burrito, from a man who used the tortilla to keep his meals warm during the Mexican Revolution to gold miners wrapping their meat up to eat on-the-go.

The term literally means “little donkey,” and there is speculation as to its etymology. Some say that the folded ends of the tortilla look like donkey ears, while others cite the burrito’s resemblance to the rolled bedding that workers and miners carried on donkey-back as its namesake. Others say the burrito itself is like a donkey because it can carry everything you need.

The burrito rose to fame in America during the early 1900s, and the frozen burrito was invented in 1956. During the 20th century, burrito restaurants began to spread from California until there were burritos across the nation, from Taco Bell to authentic Mexican-run places.

Today, different cultures have personalized the dish to their various tastes, giving it wider appeal. The two major types of burritos evolved in California, an example of the classic NorCal/SoCal contrast as the two types compete across the nation.

The San Francisco Mission-style contains the most filling of any type, with all the traditional elements of Mexican food, including meat, beans, cheese, vegetables and sauce. It usually comes wrapped in foil to retain heat. The influence of the San Francisco style can be seen in most of the health-oriented restaurants like High-Tech and Chipotle. The other major player is the San Diego&–style burrito, which typically includes meat, cheese and guacamole or sour cream—and often, french fries. Most restaurants in America sell one of the two types of burrito, and many Californians feel strongly about their preferred style (just read one of the many burrito-centric blogs out there).

As the vehicle for the rest of the ingredients, a simple flour tortilla can make or break the meal. They are best when thin and warmed, not so hot that they’ve turned crispy, but not cold, either. A good way to judge the quality is to find out whether the tortilla sticks to the roof of the mouth after taking a bite. If it does, the customer has probably hit upon the Wonder Bread of tortillas.

The base ingredient in Mission-style burritos is the beans. Often, soupier refried beans are made with lard, but not all refried beans are cooked this way, and whole beans are almost always vegetarian. Lardless beans often retain more flavor. A little bit of mushiness—a friend calls them “smashed” beans as opposed to refried—is desirable, but the beans should look like, well, beans.

Then comes the most important part: the cheese. A burrito is not satisfying if the cheese is not melted over the other ingredients. No one wants a mouthful of cold cheese.

Quality is the main thing to look for when it comes to meat. It should be well-marinated. For example, carne asada is generally cooked with lime juice and cilantro, which helps give it its juicy tang.

Getting rice should be a simple decision based on whether the customer likes it. There usually isn’t a lot of variety in rice. The main danger is having too much of it; it can easily overwhelm the other ingredients.

Cold ingredients such as salsa, guacamole and sour cream enhance the burrito also by acting as a sort of catalyst for the other ingredients: any other item in the burrito tastes good with one of these toppings. Some restaurants serve fire-roasted salsa, which has a pretty strong flavor. It can overpower the rest of the food if it’s not something the customer is looking for. Otherwise, it’s just a matter of choosing the right degree of spiciness. Diced tomatoes and shredded lettuce are also standard cold fare. Grilled vegetables—often red peppers and onions—can also make a juicy addition to a burrito and can add a salad component to the meal.

The burrito has taken a long journey to evolve into the styles we know today, and is universally loved in all its incarnations. With a little bit of experimentation and experience, anyone can be as pro a burrito eater as the hungriest of college students. Hungry yet?

I scoped out a random selection of local restaurants on my quest to find the perfect burrito. I judged in the categories of beans, cheese, tortilla, rice, cold ingredients and distribution. I stuck to vegetarian burritos, using the most basic model of beans, rice and cheese. Everyone’s favorite burrito is different, but I evaluated qualities that are fairly universal. Then I asked each burrito master what he or she thought went into making the perfect little burro.

Tonayan The Tonayan Burrito Grande, sans meat, did not disappoint. This burrito had a more authentic flavor than the burritos found at chain restaurants, and it was a little more filling. The whole pinto beans were refreshingly simple and the cheese flavorful. This substantial meal provided a satisfying mix of flavors.

“Our most popular is our shrimp burrito, which comes with beans, rice, bell pepper, yellow onions, garlic, spices, guacamole and sour cream. But I like the carne asada.”—Isidro Velasco, owner

High-Tech Burrito I found this bean, rice and cheese burrito to be one of the warmest and best mixed ones I tried, probably because the cheese was so melty. However, the mild salsa’s fire-roasted flavor was too strong and the avocadoes in the guacamole didn’t seem ripe enough. The rice had an overpoweringly sweet flavor. Next time I would forgo the rice.

El Patio El Patio’s bean, rice and cheese combo was my least favorite. Fine for a quick meal on the go, but the beans were so runny I could hardly tell there was cheese mixed in. Next time, I would add meat or salsa.

“A perfect burrito has good-quality beans, rice and meat. Making the perfect burrito is about quality. You put the right ingredients together, and it makes a delicious burrito. We sell more burritos than anything. They’re so popular because a burrito has everything in it and you can eat it anywhere. I think burritos are great, because it’s a combination of foods in one big tortilla.”—Emiliano Ochoa, owner

La Palapa The beans and cheese in this burrito were impressive. The ingredients were well distributed, and the beans were quite flavorful. The rice tasted normal, but there was a little too much of it, which detracted from the rest of the burrito. The guacamole was good yet slightly tart, and the tortilla was unobjectionable. The salsa really added to the meal. It had a good bite and was more flavorful than traditional pico de gallo. All in all, this burrito was enjoyable, but I might add a few more things next time to increase the flavor.

“Just like any food business, it comes down to where the food is coming from. The burrito is not Mexican food; it’s a Californian kind of meal that’s developed through the years. We make a burrito here called the Terminator, and that’s my favorite. It has different kinds of meats, and we marinate it. It’s juicy and not too hot but with a little bit of jalapeños in it. Burritos are popular because they’re very fast, but they are different from hamburgers. They’re healthier than any other fast food.”—Mauricio Lemus, owner

Next ArticleJack Attack: “I Hate Spiders”