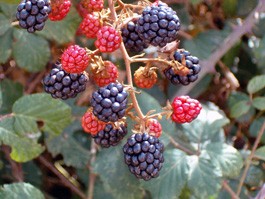 A short thorny history of the contentious blackberry

Life is full of its bitter curses and sweet blessings, but whether the hand that dealt us the blackberry had a mind toward good or evil remains a great unknown. To many property owners, the blackberry, a plant of multiple species in the genus Rubus, is a pestilent weed. To fanciers of pies and jams, the blackberry is a phenomenal free bounty. For fruit breeders, the thorny vine provides a challenging case for endless improvement.

For Gloria Vigil, the blackberry is just business. Vigil assists the family-run Sebastopol Berry Farm, where seven cultivars of blackberries grow in a varietal scheme that spreads the harvest across nearly half the year. The first to ripen is the olallieberry, which turns sweet in early June most years, although this season’s crop came two weeks late after a long, cool spring. Currently, the Cherokees are hanging black and heavy. This month the Triple Crown arrives, a late-summer berry praised for its flavor, high yield and vigorous vines, and thereafter the Chester, favored for its huge per-acre yield—up to 15 tons, twice that of most other cultivars. The Vigils sometimes harvest berries—including blueberries and raspberries—as late as November.

The berries are sold by variety, a side-by-side tasting opportunity that affords consumers a glance at subtle nuances of smell, flavor and texture. The most popular, says Vigil, is the Marion blackberry, named for the county of its origin in Oregon, where berry breeder George Waldo combined the pollen and seeds that gave birth to this breed in 1945. Today the Marion is one of the most favored blackberries in the world.

But better berries are always possible, and at the USDA’s experimental farm in Corvallis, Ore., breeders are busy creating them. Here, government geneticist and berry breeder Chad Finn spends his summer days studying the fruits and shoots of scores of varieties. Finn evaluates each when grown under varying conditions, and he is watching in particular for thornless, high-quality breeds. Thornlessness, a recessive trait that took some time to isolate, was finally introduced to the public in 1989 with the release of the Waldo blackberry, Finn says. In the same year, the University of Arkansas introduced its first thornless innovation, the Navaho. Since then, dozens of other thornless blackberries have been propagated.

Thorns may be merely annoying for small-scale farmers who harvest by hand, but for big producers who employ machines to strip the vines of fruit, thorns are a serious liability. At least two berry producers in the 1990s were knocked out of business, Finn says, by consumer lawsuits that stemmed from instances of thorns found—and presumably chomped on—in frozen berries.

Size matters, too, especially in the fresh market, and bigger isn’t always better. The Black Butte blackberry produces huge orbs as long as two inches. Breeder John Clark once helped create a 30-gram blackberry 2.5 inches long and more than an inch wide at the University of Arkansas, home of an accomplished breeding program. That brutish berry, which still serves as an occasional gene contributor to breeding projects and a sure crowd pleaser during harvest-time tours, was itself not a berry worth releasing to the public, Clark says.

“You’d need a knife and fork to eat it,” he says by cell phone while driving to a research station in the Ozarks. “Our goal isn’t to break the record for the biggest berry. We want to improve flavor and make people smile.”

The industry of cultivated breeds is growing quickly. As of 2005, 50,000 acres grew around the world, with 17,000 in Mexico and the United States. Oregon today is among the global hotspots of berry production, with California not far behind, but Mexico’s industry has exploded to meet demand for off-season blackberries, from 560 acres in 1995 to more than 8,000 today.

Finn says that naming new cultivars “is a horrible process,” a tedious task that sparks disagreements between breeders and which ultimately sends most commercial berries to the seed catalogues with tame, innocuous, market-friendly names like Black Pearl, Black Diamond and Obsidian. At the University of Arkansas, Clark says, naming has followed a Native American theme. The university has produced, among others, the Cherokee, Comanche, Cheyenne, Navaho and Kiowa blackberries. “Because,” Clark says, “blackberries are native Americans, too.”

The familiar Himalayan blackberry is a virulent invader. Actually a native of Eastern Europe, R. armeniacus came to the New World as an innocent purchase from an Indian seed catalogue. The mailing address on the package was that of Santa Rosa’s own Luther Burbank, 19th-century pioneer of American fruit breeding and the man who would make Sonoma County ground zero in the attack of the Himalayan blackberry. It was 1885, and as Burbank’s vines surged into life over the next two years, the scientist praised this exciting new berry for its large, sweet fruits and tenacious vigor. The species quickly spread in the West as a popular backyard crop and self-assembling livestock barrier.

But it got loose, first here, then there, and eventually virtually everywhere between California and southeast Alaska. It is still spreading, sources say, even pushing into Western Europe, Australia, New Zealand and Africa. Today, R. armeniacus is widely recognized as one of the most economically ruinous invasive plants ever to take root in American soil. It carries Pierce’s disease, dreaded by winemakers, and organized efforts to beat it back almost invariably fail. Indeed, hardly a highway in Northern California would look quite right without those hellish tangles.

In tamer arenas, modern breeders lead the push toward better berries—berries without thorns and vines that stand on their own. But the Himalayans remain free for those who battle the brambles—and we all know the allure, we know the pain and we love the prize. Yet, for each skirmish with a wild blackberry patch, a picker limps away, torn and bloody and still undecided on that old mystery of whether this tempting little fruit is a gift of the gods or just an artifice of hell.