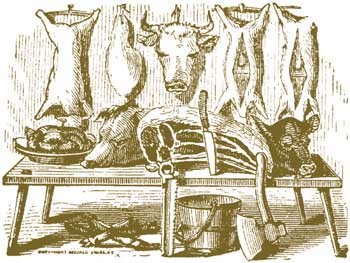 Something Wild: Specialty meats give a taste of the land.

Down Petaluma Hill Road from Gorilla Growers, on the way to Penngrove, boar, elk, buffalo and venison are advertised, sometimes with a hand-written sign adding the notice, “Puppies for Sale.” The establishment is Bud’s Exotic Meats, one of those places everyone means to visit but never gets around to doing. Instead, we settle for fluorescent-lit supermarkets monotonously offering choices of chicken, beef, pork or fish served up on little styrofoam trays with diapers to soak up the blood, protecting us from any potentially unsettling reminder of where meat comes from.

When I finally visited Bud’s, I brought some friends who live across the street from the place but had never been, and we slowly drove down a pastoral lane where squirrels flicked their tails, running along fences. Bud’s is small and unassuming, set back from the road amid low rolling hills. On this day, as if on cue, dark vultures hovered low in the air, and, stepping out of the car, we were greeted by the unmistakable smell of dead flesh before noticing a large, gray plastic garbage bin filled to the top with off-cuts, fat and gristle.

Having enjoyed some of Sonoma County’s finest ales and red wine the night before, the sight of the bin set off my gag reflex. But this is what I had come for: to get closer to where our food comes from, to get away from flaccid factory-farmed meat, and to enter the world of exotic or specialty meats, the food you don’t regularly find on the average American dinner table.

I frankly was hoping to see a pig strung upside down being emptied of its innards, or a buffalo being taken down like the one at the end of Apocalypse Now. But Bud’s is a fairly quiet place, with a perfectly pleasant little foyer where one can scan the freezers for a plethora of meat, purchase spice rubs and marinades, or admire the massive stuffed elk head on the wall. The freezers contained the exotic meats we were most interested in: buffalo steaks, plump and sanguine venison sausages, wild boar chops and elk steaks.

There were also some fine-looking Châteaubriand, whole rabbits, Indian salmon jerky and Bloody Mary-marinated roasts (sans the alcohol). It was all very Sonoma County-esque, touristy even, and I was disappointed that the walls weren’t streaked with blood like an abattoir’s and no sound of screaming lambs emanated from somewhere behind the place.

We were greeted by a down-to-earth fellow named Mike, a Bud’s employee for three years, clad in a Remington gun-hat and blue jeans, who explained that the rib eyes and steaks were most popular and that Bud’s occasionally gets ostrich meat, and he recommended a rotisserie in order to cook whole rabbit.

“Sauté it in a pan!” shouted a man in the back, working cuts of meat from a fat-encrusted carcass dangling by a chain, like an ice sculptor chipping away a masterpiece. Elena, another of the workers, silently wrapped meat in butcher paper, gazing once in a while out the window. The freezers offered plenty of choices, including huge hunks of meat meant for a party or to last one a while. Most of the meat is hormone-free, grass- and grain-fed, and comes from rural ranches in Texas and New Zealand where the animals live fairly natural lives before their fateful day. Bud’s acts as wholesaler, but will also custom-prepare an animal you bring them. You can even take a bag of bones home for ol’ Rover for only two bucks.

Despite the visual impact of the large bin of animal parts that greeted our visit, Bud’s runs a very clean operation. As of late October 2005, the facility had zero health citations or violations with the Sonoma County Sonoma Department of Health Services’ Environmental Health Division, which inspects every food-serving establishment and publishes the results online. Matt Gamba, Bud’s son and current owner, even called me up later to ask how the meats I got were. How often does that happen when buying a sad-looking pork chop from Albertsons?

After our visit to Bud’s, and in order to gather opinions about exotic vs. “regular” meats, I hosted a little tasting party with a coterie of carnivorous friends, as well as one vegetarian who acted as a “control” and was repulsed by the whole proceedings. We thawed out venison sausages, wild boar and buffalo–vacuum-sealed, they can last up to two years frozen–and cooked them very simply with olive oil, salt and pepper in order to experience the essence of the meats.

A Culinary Institute of America grad brought her husband and together they monitored the action, cooked and consulted on the finer points of cooking exotic flesh. We labeled each plate of meat; we chewed; we swallowed. One participant found the wild boar to be “like a cross between steak and pork–stork!” The venison sausage was popular, though the buffalo and boar, cooked expertly on the rarer side, were found more intriguing.

Exotic meats have a pleasantly gamey, richer, more complex taste. Remember, these are free-ranging animals, so their muscles are actually used and developed rather than left to atrophy in some atrocious holding pen.

The Bloody Mary tri-tip, a nice cut of beef swimming in a Bud’s marinade, resulted in the group consensus that we had entered some kind of “tri-tip heaven.” For fun, I set out some precooked, store-bought Oscar Meyer bacon, limp, greasy stuff that needed no refrigeration, and for some reason had black areas that looked sickeningly like stitches. I labeled it “human bacon.” This led to a group discussion of cannibalism–after all, the most exotic of meats. We decided that the best human bacon would probably be derived from plumper humans.

Afterward, we gathered round the television and watched the Cramps’ legendary performance at Napa State Mental Hospital in 1978, contented smiles upon faces as the wilder meat sat in our bellies. We were as Rambo in First Blood, contentedly gazing into a flickering fire after filling his belly with wild boar.

Seek and Ye Shall Find

“Specialty” or “exotic” meats are vague, relative terms that could mean anything from fancy prosciutto to a pig head to alligator steak. Here’s a subjective list of some local meat purveyors.

Upscale specialty markets like Oliver’s, Fiesta, Petaluma Market, Mill Valley Market and others usually carry whole rabbit, and can special order rattlesnake, eel, emu, capon (de-sexed chickens with “marbled” meat), alligator and more. Just ask, and give them some time to find it for you. This goes for other meat departments at larger-scale grocery stores: ask the butchers what they can get their hands on in the way of exotic or specialty meats.

Trader Joe’s regularly carries buffalo burgers in the frozen section. Defrost and slap ’em in a pan, but don’t overcook. Also, the Washoe House, located at Stony Point and Roblar roads in Cotati, has buffalo burgers on the menu.

Ask around with friends and family and you’re sure to find a hunter within six degrees of separation. My wife has a co-worker who has bear meat in her home freezer. This is probably some of the best exotic meat–minimally processed, fresh and you can find out exactly where it came from.

Best of the North Bay