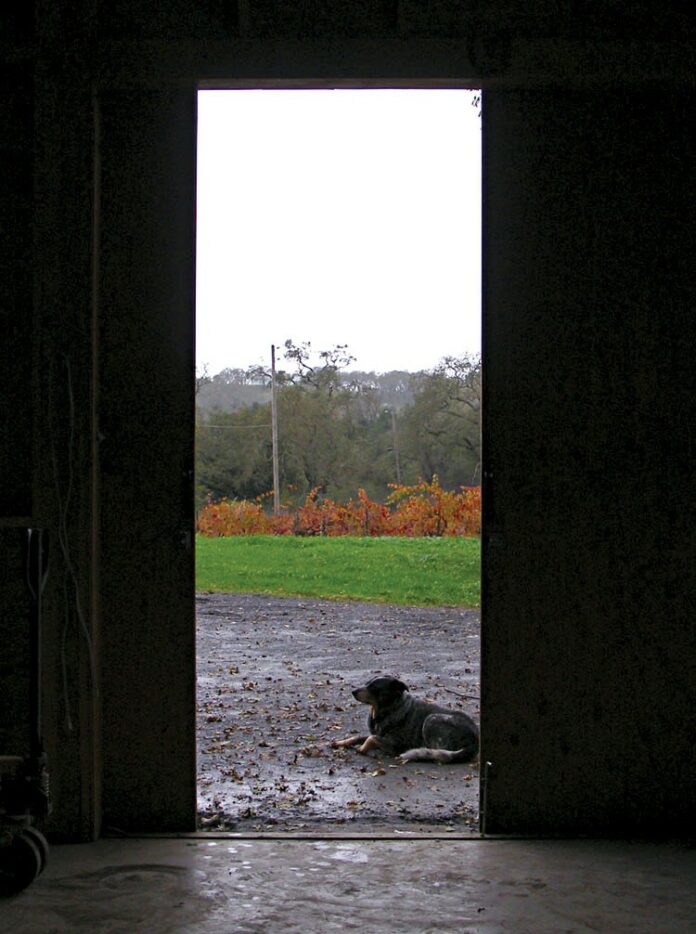 When Will Bucklin set out to make wine from his family’s own vineyard, his longtime grape buyer was dubious. After all, Joel Peterson had built a hugely successful winery on the strength of old vine Zinfandel from vineyards like Old Hill. It was sort of his baby, closely identified with Ravenswood Winery. But after taking one whiff of Bucklin’s version, Peterson handed it back and simply declared, “That’s Old Hill!”

They’d worked out a fastidious system to keep the harvest on a par. Planted in 1885 by William McPherson Hill, the 12-acre plot contains a hodgepodge of grapes besides Zinfandel; any variation in the pick could alter the wine’s character. Some of the vines stand out among the rest, as Bucklin’s cat demonstrates during a tour of the vineyard. Scrambling up a massive trunk, she enjoys a perch high above the Zinfandel atop a Grenache vine.

With the help of a UC Davis researcher, Bucklin developed an intricate, color-coded map of the vineyard’s resident varietals. At first glance, it might be a demographic map of lower Manhattan. Why so random? Bucklin is all too familiar with that question. Trying to guess at the overall plan is like divining meaning from the pattern of clouds—a kind of madness. Bucklin uses the map to cull Grenache from the field, resulting in the deeply colored and substantial 2010 Old Hill Ranch Grenache ($38).

Adhering to the organic practices of his late stepfather Otto Teller, who donated the ranch’s conservation easement to the Sonoma Land Trust, which he founded, Bucklin farms the vineyard with minimal input. His live-and-let-live critter policy is even extended to gophers—although the cats run their own program—and deer. As Teller used to say, “Deer got to eat, too.”

If the 2009 Old Hill Ranch Zinfandel ($34) is not simple, bright and jammy, it’s on target. Mixed spices and integrated, lingering flavors all play supporting roles in this complex field blend. Bucklin took cuttings from Zinfandel, Petite Sirah and Alicante Bouschet vines to create the new “Bambino” block. But the 2010 “Bambino” Zinfandel ($24) has a similar earthy-spicy aroma—cardamom, cocoa and cranberry bread—and rich, brooding fruit.

The Bucklins are happy to sell their wines mainly through traditional distribution channels, rather than spend a lot of time on self-promotion. Will Bucklin prefers to stay by the vineyard and walk it daily, on the insistence of his “best tool in the vineyard,” he says, gesturing toward patiently waiting dog Tanner. There’s always something new to discover in a historic vineyard that’s as unique as a thumbprint.