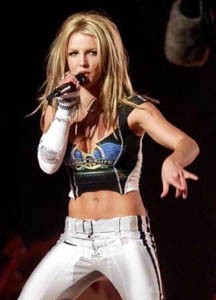 Taking the Britney and Bob challenge

ONCE UPON a time, a little blond Baptist girl from Louisiana busts into international stardom, snagging the biggest ever, multiyear sponsorship pact with a ruling cola conglomerate. The teen queen named Britney Spears hits Forbes’ Top 10 list of most powerful celebrities, pushing Bruce Willis, Michael Jordan, and Oprah Winfrey down the fame-and-money ladder.

“I have strong morals. I believe in God. I’m saving myself for marriage,” chants the self-proclaimed virgin as she strips, struts, gyrates, and thrusts in a belly- and boob-baring getup, while singing “I’m not so innocent.” The mass marketing of Britney inspires fashion trends for pre-pubescent girls and teen slut websites for, well, everyone, everywhere. Shortly after the rising Lolita graduates from the Mickey Mouse Club, a geriatric senator named Bob Dole runs for U.S. president.

Coached by the religious right, the Republican candidate preaches abstinence-only as America’s answer to teen pregnancy, abortion, and STDs. During elections Congress passes the Welfare Reform Act, laying out nearly a half billion dollars to scare American youth to keep their legs shut and pants zipped. The federal and state funding feeds a bulging born-again virgin movement and spawns Christian-run programs that decree sex within marriage as the “standard for human sexuality.”

Conservative Bob loses the presidential race, but soon scores a lucrative Viagra advertising deal. The former chastity champion now peddles the little blue pill that permits him to once again get it up and ride strong after prostate surgery and nearly 80 years on the planet.

Bob meets Britney when the abstinence stud and virginal slut team to peddle his latest little blue friend, the Pepsi can. For those of you who missed the trio’s commercial debut, the spot is hot. Britney strips; then, with her dance troupe of workers, romps through a warehouse in faded hip-hugger jeans and white bustier, with flashes of her pierced belly and pushed-up bosom. Cut to a fast-food cook standing before the TV staring, jaw dropped, while food sizzles on the grill behind and Britney sizzles on the screen before him. The ad climaxes with Bob, too, overheating as he grins and shakes his head, then says, “Easy boy” to his barking dog or, maybe, his Viagra-triggered member.

We’re all titillated. The ad is so fun, fast, and sexy that I’m a Pepsi convert, and I don’t even drink cola except now and then with rum. I’m a Britney fan, and I loathe her music. I’ve also warmed to Bob and his dry sense of humor.

BUT, ALAS, this story is not about me but about the next Pepsi generation growing up hostage to America’s schizophrenic approach to sex. Teens are the casualties in a culture war that reduces our basest, most transcendent drive to extremes. Youth are left to flounder under the intensified hypocrisy and mixed messages of a nation that can’t move beyond sexuality’s marital ideal or commodified reality.

Federal policy says teens shouldn’t have sex, but commerce bombards us with half-naked nymphets hawking the latest magazine, music, movie, video game, gadget, fashion. Amid the sexual gluttony of our media and marketplace, church and government brazenly pull information from youth and push chastity until marriage, calling it balance. I call it paradoxical. Neither excess nor repression develops into sexual intimacy or connection, let alone responsibility.

Bob’s right-wing cohorts undercut sex education and family planning to protect kids’ innocence. Abstinence-only programs are up 3,000 percent since 1996. President George W. has proposed increased abstinence funding, fulfilling his campaign pledge to make nonmarital chastity a priority, at least for others. His brother, Florida Governor Jeb, is reallocating $1 million of family planning funds into the pregnant pot of abstinence-only programs, about half now headed by Christian groups.

The moral of this story is muddy except that I should have purchased Pepsi stock before the Britney deal. Maybe teens can’t have sex, but adults can package teen sex to sell goods and keep our economy strong. Or if you’re single, and especially under 20, you can peddle sexuality, but you can’t piddle your paddle.

Possibly the moral is that we should either admit teenagers are sexual beings–who shouldn’t be denied information and access needed to make healthy decisions–or stop leering at them while sipping our Pepsi. But that’s just a fantasy.

Lara Riscol is writing ‘Ten Sex Myths That Screw America,’ a book she began while completing a master’s degree in contemporary issues and public policy at the University of Denver. This is the second in a two-part series on soda pop and society.