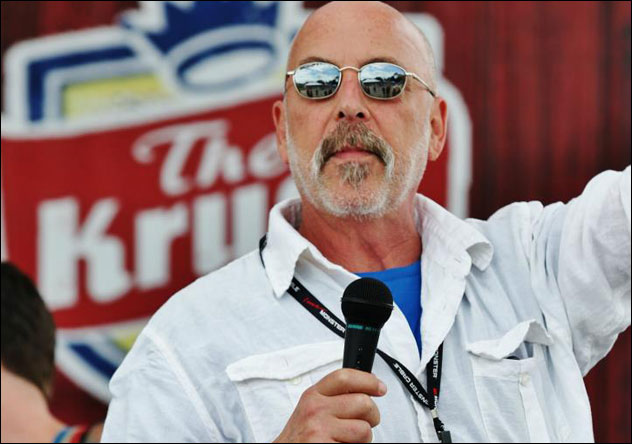 When listeners tune in to 95.9-FM tomorrow morning, they won’t hear Brian Griffith’s voice over the airwaves.
That’s because Griffith, who for six years has served as the morning host of the KRSH, was let go from the station today by general manager Debbie Morton in an early afternoon phone call.
“She said, ‘We’re making changes, and they don’t include you, and good luck, and we have a check for you, and we need your keys,'” Griffith said when I called him this afternoon.
This came as a surprise to the listeners who called me today, but did Griffith see it coming? “Sort of,” he told me. “The guy who owns the station, he doesn’t even live in the area. And the first time I met him, the first thing he said to me was, ‘I don’t get the KRSH.'”
According to Griffith, program changes were imposed that he didn’t agree with. “Over the last three months, they’ve just been yanking all my personality out of the show,” says Griffith, adding that he had “no input at all” in the music played on the show. He also lamented that the station playlist was recently cut down to just 800 songs by program director Andre DeChannes.
“The way that the playlist has been these last couple weeks,” he said, “I mean, I love Eric Clapton, but do we really need to hear ‘Lay Down Sally’ again? Do we really need to hear the Wallflowers again? Or the Counting Crows?”
Live segments and local bands were cut from mornings, too, he said. “And I complained,” the 20-year radio veteran told me. “I’ve been at it a long time, and I was vocal with my opinion.”
I sent Morton an email asking for an explanation about Griffith’s dismissal. She replied simply: “Management at Wine Country Radio felt that changes to The Krush morning show were long overdue.”
Morton also added that Bill Bowker would start as the host of the morning show early next week.
I called Bowker, who confirmed the upcoming move. “I haven’t done mornings for years,” he said. “Maybe it’s time for a little change here.”
Bowker will drop his afternoon time slot, which he’s held for as long as anyone can remember. As for morning show concepts, Bowker says he has some ideas percolating, “but this all just happened today,” he said, “so it’s too soon to say.”
No word on an afternoon replacement yet.
–
UPDATE — It’s 9:23 the next morning, and here’s what the KRSH is playing: