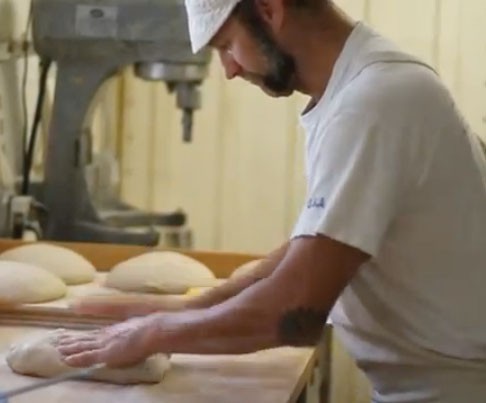 It’s 7:30 on a Friday morning, and Mike Zakowski has been up all night, baking. Soon he’ll head to the Sonoma farmers market, where he’ll sell the bread, hot pretzels and flatbreads that came out of the oven three or four hours before. “I only want to serve the freshest bread,” says Zakowski, known as the Bejkr, whose spelling comes not from Eastern Europe but from the International Phonetics Alphabet.

This past March, Zakowski competed at the Coupe du Monde de la Boulangerie (the World Cup of Baking) in Paris as part of the Bread Bakers Guild Team USA. Thanks to his extensive training—including a 60-day stretch in which he baked 50 baguettes a day—the Bejkr’s genius translated, landing him the silver medal in the Baguette and Specialty Breads category.

Zakowski, who lives in Sonoma, is the subject of local filmmaker Colin Blackshear’s latest documentary, Breaking Bread, Kneading Culture. To help complete the project, a “FunRaising” dinner will be held this week. Attendees will dine on a pig raised by Nick Rupiper and prepared by former Chez Panisse chef Charlene Nicholson, flatbreads from the Bejkr and produce from Oak Hill Farm and Paul’s Produce. Guests will also be treated to music by Arann Harris and the Farm Band and a special pre-screening of the film. It’s all on Sunday, Nov. 11, at the Sonoma Community Center. 276 E. Napa St., Sonoma. 5–10pm. $150. For more, see www.thebejkr.com.