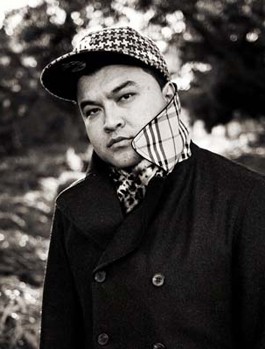 As a half-Asian music fan, I’ve never seen much of myself in pop music. Sure, there were the guitarists from the Pixies and the Smashing Pumpkins, and the singer from Hoobastank. These days, there’s the Filipino guy from the Black Eyed Peas and the fellows in Linkin Park, but someone like Berkeley hip-hop vocalist Lyrics Born still sticks out like a sore thumb. In a recent phone interview, the half-Japanese artist, who brings his high-energy show to the Hopmonk Tavern in Sebastopol this Saturday, reiterates that he’d rather be judged on his merits than complexion.

“First and foremost, I’m an artist and that’s my job,” says the musician, whose birth name is Tom Shimura and who changed his name from his original, less-subtle moniker Asia Born. “I feel that art should benefit people in their lives somehow. I hope that what I do is inspiring to everybody.”

That’s just what Shimura has done since he attended UC Davis, where he cofounded the Solesides/Quannum Projects collective and record label, which featured such local luminaries as duo Blackalicious, singer Joyo Velarde (Shimura’s wife) and Mill Valley’s DJ Shadow (Shimura can be seen in a wig on the cover of the latter’s landmark 1996 album Endtroducing). As part of the duo Latyrx, Shimura received raves for his infectious speak-sing snarl that seamlessly blended elements of rap, funk and soul. It’s no wonder his regional smash “Callin’ Out,” from his 2003 solo debut Later That Day, was a hit on both R&B and hip-hop stations as well as local alternative rock radio.

“We’re in an ‘anything goes’ kind of time, since the iTunes/iPod generation is so diverse in their taste,” says Shimura, who relishes the diversity he sees in the Bay Area hip-hop scene. “That’s something I’ve been about my whole career and now the rest of the world is getting there. This sort of ‘mash-up’ culture is right now.”

Lyrics Born’s latest album, the aptly titled Everywhere at Once, is a beautifully jumbled affair, featuring the electro-funk of “I Like It, I Love It,” the rallying new wave of “Do U Buy It?” and even the reggaetón strut of “Top Shelf (Anything U Want).” It’s also his first album since shifting to full-band mode, something that’s accentuated his already dynamic live shows.

“For people that had seen my shows, I never want it to get stale. It has to always improve and stay exciting,” says Shimura. “This was a natural progression for me. I always imagined, even when I was sampling, that I was leading a band. My older records, even though they were sample-based, a lot of times they sounded live.”

The album’s lyrical content covers everything from romance and media overload, to the lies of the government and the sudden death of a close friend. At his most original, Shimura references the prejudices he’s dealt with in “Cakewalk,” a buoyant, inspirational tale of perseverance: “‘A Japanese rapper? That’ll be the day’ / That’s what my teacher told me back in the 12th grade / Can you believe that shit? Good thing I didn’t / Otherwise, who else is gonna sell these tickets?”

Shimura does see things improving, though. “I think what’s more important is that music in general, the entertainment business in general and public life in general are more reflective of what the true makeup is in this country and in the world,” he says. “We should be educated about all cultures and all peoples’ history in this country, whether that history is difficult to stomach or not.”

As a proud evader of pigeonholing himself, Shimura supported our new interracial president, whose stature is already a symbolic victory no matter what his administration achieves. “A lot of people who have been disenfranchised by the political system are suddenly energized and actually feel a part of it and not excluded,” says Shimura, who postponed his latest tour for the campaign. “The new American culture are people like Lyrics Born, people like Obama. There’s definitely going to be more Obamas, more Lyrics Borns, more Kimora Lee Simmons’, more Derek Jeters, more Keanu Reeves’ than just straight stock.”