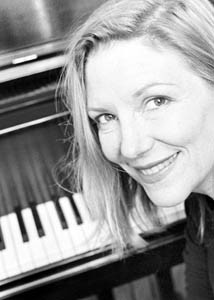 Local songstress Bonnie Hayes is back with a vengeance

“IN A WAY I’m more of a rock ‘n’ roller than I ever was,” huskily declares Marin County singer-songwriter Bonnie Hayes, clad in jeans and boots and hanging out in her San Anselmo home-cum-recording studio one recent Sunday morning.

“I always used to want to polish things up,” she continues. “But I just think that as I got older I figured out how important it is to not take the rough edges off things.”

The self-described “40-something” Hayes was well known around these parts more than a decade ago when her band Wild Combo was hot on the local club circuit. When she grew weary of lugging her keyboard and equipment to various venues, Hayes turned to songwriting for others. She found fame penning such hits as “Have a Heart,” “Love Letter,” and “Slow Ride” for another Bonnie–last name Raitt–and writing pop songs for other artists.

After a stint living in Los Angeles, Hayes has returned to Marin County, and she’s going back to her wilder roots. Always a keyboard player, Hayes has found renewed power in the (infinitely more portable) guitar, which she took up a couple of years ago.

Hayes is planning to show off her freshly inspired raw music with local appearances and a new record, currently in the works.

They will play a set of three songs (including a new one written by Bonnie) as part of the Music for Kids at Risk Celebrity Concert II .

“I didn’t know much about [the benefit concert], but when I found out what the deal was, I agreed to it,” Hayes explains. “And partly why I agreed to do it is so that I could play with my brothers. I don’t get to play with them very much.”

On April 16, Hayes will play a full-length gig at the Sweetwater of Mill Valley.

Hayes explains she moved back to Marin County to provide a better sense of community for her 7-year-old daughter. She has continued to write, she teaches songwriting courses throughout the Bay Area, and she has also begun producing for other artists in her home recording studio.

Her biggest project is a record that’s currently very much in progress. Hayes and brother Kevin were recording drum tracks this week. “We set up the drums and the mikes in the bedroom,” she says. “We’re really having fun.”

The as-yet-untitled album should be out by the end of the year.

“The new record will be very stripped-down, rough-sounding guitar music because that’s what I’m into,” Hayes says. “It will be quite rowdy, that I can promise!”

Bonnie Hayes will perform Saturday, March 17, at the Music for Kids at Risk Celebrity Concert II, from 7 to 11 p.m. Les Claypool of Primus, members of the Doobie Brothers, the Santana Band, and others also will appear. Luther Burbank Center, 50 Mark West Springs Road. Tickets are $35-$100. 707/546-3600.