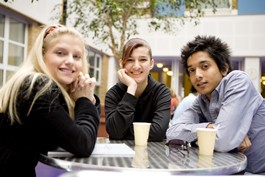 We learn new things about wine every day. It’s good for the heart, it’s good for the French, it’s good for laboratory mice. There are also many questions unanswered, and some as yet not asked. Has it occurred to no one else to pose this question: Is wine like high school?

It began last summer. Somewhere back there I seemed to have missed a reunion. I believed mistakenly that a cadre of hopelessly backward-looking, glee-club types collected data on classmates, tracked them down and implored them to converge. It turns out, you have to care enough to find out about it. I didn’t care to clink glasses with half-remembered people and compare careers, waistlines and the results of self-replication programs.

“It just doesn’t seem like 10 years have gone by!” No, because I missed that one, too. I happened to receive intelligence about that event, and had been listed as “missing-in-action.” I thought that was a rather romantic designation. I wasn’t puffing up my backstory, bullshitting some old flame about how I’d cashed in during the dotcom bubble. I was out there in the world, a wild card, dangerously anonymous with no forwarding address.

So next time I’ll expound on that missing-in-action bit. I’ll send them a crumpled bio, explaining, “Nothing is known of the whereabouts of James. He was last seen on the border of Bhutan, trekking across the treacherous glaciers of Outer Chai Latte. He had hoped to find the legendary tasting rooms of the mysteriously temperate Cloud Valley, where the world’s rarest Pinot Noir is made by an ancient lost sect of Burgundian Buddhist monks.”

Meanwhile, it all got me to thinking. (I want to make it clear I’m not talking about wine in high school, which is clearly not acceptable, even in the context of, say, added realism in a theater production. I can offer younger readers this nugget of learned advice: Do not drink the props.) If you think about it with a clear mind—or better, with a bottle of wine—the synergies rise out of the fog.

For example, in the world of wine and high school, you’ve got geeks, snobs and Jacques. A cycle of events marks the year: budbreak, midterms, graduation. Grapes are pressed together, shunted into tanks like students pouring in and out of classrooms. In the crush, one must seize the day or forever lament the spoilage of young wine. Real estate prices are higher in the best school districts, as well as the most fashionable appellations. Everyone wants to get in the 90th percentile, and there’s a fair amount of teaching to the test. Mr. Parker hands out good grades to his favorites.

The traditional elective language of wine is French, much loved as an institution, as refined as it is useless: Voulez-vous les cépages beaucoup? Oui, madame, je’n veux élevage, terroir et dégorgement, merci! I don’t remember much about the French I took. Spanish is the practical elective that makes the world go round: ¿Cuando ven las pinche uvas? Only a small minority of über-geeks take German: Ich bin ein Lemberger.

You don’t have to pass advanced chemistry to make wine; there’s usually a pretty girl in the lab who will help out. (Aw, take a census—this is true 85 percent of the time.)

We cheer on the home team, the Fighting Varietals. Rah rah rah. Take Cabernet Sauvignon, which is obviously French for “prom king.” Cab is the team captain, the class president. Everywhere in the world Cab goes, it’s the center of attention. Cab is popular, brawny and often quite intolerable until you get to know it years later when the edges have softened, and the nuances of character show. With some vintages, we’re still waiting.

Chardonnay is wine’s popular, blonde cheerleader. Chardonnay slathers on cocoa butter in the California sun and is spoiled with expensive French oak. Often buttery and cloying with ersatz sweetness, Chardonnay is at once as unpopular as it is popular. With the right environment, however, and a judicious vintner, Chardonnay can be smart and refined with plenty of potential.

Merlot is the everyman, that normal guy with the normal haircut whom you hardly notice. Merlot gets average grades and stays out of trouble. Nobody wants to be Merlot; almost everybody is. Even as millions raise their glass and declare, “I won’t be normal!” sales of Merlot continue to expand.

Pinot Noir is the awkward arty type. Pinot used to be seen as effete, too delicate to withstand the rigors of the real world and of modern winemaking. In the wrong climate, Pinot can end up soaked with alcohol, smelling of barnyard and frustration. But with a little care, it can be coaxed into its full expression. Pinot can become the nerd who’s made it big. Who cares if we still don’t understand its troubled soul? With success come the clones, more robust and durable than delicate youth. The charts go up, alternative becomes a major market and product moves.

Zin is all-American, a little mysterious, rock ‘n’ roll all the way. Zin shows up every decade in a new guise: the jug wine, the cult wine, the greaser, the long hair, the punk. A tattooed redhead on a motorcycle, Zin is at all the keggers. Rough but articulate, Zin had been to Burning Man half a dozen times before you ever heard of it.

Syrah can be awkward, an outsider. Syrah grows wildly in the vineyard, but often becomes a basket case when confined within the institution of the winery. Syrah can be pretty in pink, or smoking in leather; feminine but tomboyish, earthy and blowzy yet beautiful. Is it Syrah or Shiraz? You’re just not sure which way it’s going to go. I saw Syrah chewing tobacco behind the Ag building. I heard that Syrah plays double bass in the symphony. Becoming more rich and multilayered over time, and if lush in both senses, Syrah is still the one for me.

Riesling is the weird foreign exchange student, who, it turns out, is five times more worldly than you ever knew.

Surely effervescent, giggly Champagne could not be taken seriously. But some years on, you discover vintage Champagne; one New Year’s eve with your head full of creamy bubbles and the haunting scent of French perfume, you may be seduced by Champagne, and in a sodden state of inspiration, declare, “Only Champagne every day from now on, for me!” And wake with an incredible hangover.

Pinot Meunier is . . . who was that kid? Did we go to school with him? I don’t remember.

But life, alas, doesn’t always match up to expectation. Sometimes Pinot doesn’t add up to something exquisite. Sometimes Cab is not the king, it’s lost in a sea of look-alike Cabs trying to do the thing that’s popular, indistinguishable from a good Merlot. Real life is a blend.

Taken as a class, our wine culture is a straggly bunch. Other than a handful of know-it-alls who have stories from their summers spent in the vineyards of Europe, our wine culture is struggling to pass the GED. We have barely moved beyond the high school popularity contest. This is a culture that sees a movie and says, “Look, a funny guy said something funny! We’re not drinking Merlot, it’s so totally bogus. Let’s drink what the funny guy drinks.” And when I say “we,” of course I mean them, because we are so smart and special. No one understands us, and we’ll be friends forever. Though we look back on treasured vintages fondly, the best years are yet to come.