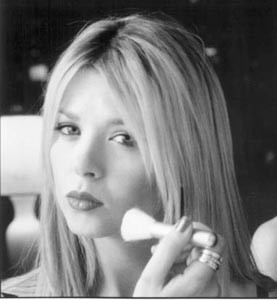 ISN’T IT TRAGIC being a glamorous single? Spending your nights at the most exclusive nightclubs, burning hundreds of dollars on fancy cocktails, having wordless trysts in the parking lot–and all this effort just to alleviate the loneliness that threatens to crush the soul like a sensitive little bug?

At last, there’s a movie to console you during those sad moments between the morning hangover and the hour when you must put on your war paint and carefully selected wardrobe and wade out into the sea of flesh again. And this film is called Body Shots.

It starts off with a brave little poem, which states (I was weeping too hard to get the exact wording), “You can have a ride on my jelly roll, but you can’t have a piece of my soul.” (So true! And yet, so cruel!) Sara (Tara Reid) opens the story with a vignette that could be titled “Courtney Love’s Night Out.” She’s swerving home in her car, clad in a slip, crying and drunk as a skunk. Crosscut to a pair of acquaintances (Amanda Peet, Sean Patrick Flanery), who wake up hung-over, fully dressed, and not really introduced to each other. Sara busts in on the scene, raving about being date-raped.

Flashback to how the mess all began: men showering at their gym, trash talking about all the pussy they’ll be rounding up that night. Flashback to women, putting on their makeup and talking about whether they mind giving head or not. Thence to the overproduced scene at the disco, a bacchanal of blue lights and throbbing music, during which I went crazy trying to figure out which of these actors was which. Apparently the evil Christopher Reeve guy is Michael (Jerry O’Connell), an Oakland Raider on the prowl; the Brad Pitt knockoff is Shawn (Brad Rowe), Michael’s buddy; and Ron Livingston is Trent, the hopeless horndog who crashes the scene and ends up getting lashed by a dominatrix.

But all the characters are subordinated to Reid. Sara’s near Rashomon experience with Michael takes over the movie. Her night of bad sex is an example to all of us clublanders, as is the film’s big knee-trembler scene in a parking lot up against a cyclone fence. Compulsive. Animalistic. Chilling. Brrr, just imagine the feel of that cold metal against your naked butt. All through the act, the couple talks in voice-over about how neutral and empty all of this tragic loveless sex is! Can’t you sympathize? I was crying like a baby! I was crying a river! I was crying 96 teardrops! I remember that director Michael Cristofer’s previous film, Gia, also had a lesbian scene through a chain-link fence. Does Cristofer harbor the only known case of a cyclone-fence fetish?

But, I mean, this isn’t about sex, it’s about love! As we learn from the scene of one of these kids–damn, which one was it?–giving the camera a 1,000-yard stare and repeating, “Sex without love is violence! Sex without love is violence!” So true, so sadly, terribly true. Harold Robbins tried telling us, Jackie Collins tried telling us. When will we learn? When will the world realize that beautiful dim-bulbs need love, too! Oh well, off to Club Vapid. See ya!