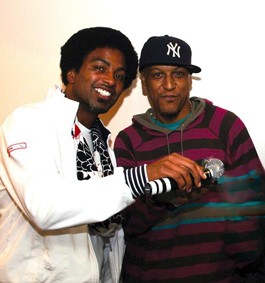 The '90s in full effect at the Hopmonk

The 1990s revival has yet to hit full swing, but when it does, there’s no question that Digable Planets will be a key component. Nothing says early ’90s conscious hip-hop quite like the group’s revolutionary Reachin’ (A New Refutation of Time and Space), a chilled-out 1993 debut that yielded the massive hit “Rebirth of Slick (Cool Like Dat).” Along with US3 and Guru, Digable Planets mined bop-era jazz instead of James Brown for its samples, and changed hip-hop’s vibe forever; even E-40 began his My Ghetto Report Card with a verbatim sample of a needle dropping on the original recording.

The group is now touring without Ladybug Mecca, the group’s female member, and in doing so will appear sadly bereft of another integral ’90s idea: that women can rock the mic just as hard. Nevertheless, original members Doodlebug and Butterfly (shown) perform on Wednesday, Dec. 9, at the Hopmonk Tavern. 230 Petaluma Ave., Sebastopol. 9:30pm. $20. 707.829.7300.

Another staple for your upcoming ’90s party would be a copy of Mushroom Jazz, by DJ Mark Farina. Beginning in 1996, Farina’s iconic CD covers simply featured a small mushroom, or two, or three, depending on the volume, and specialized in the latest and greatest house music and acid jazz from the Bay and beyond. Mushroom Jazz became the late-night soundtrack to many cram sessions, makeout parties and drug binges, and Farina reigned supreme as the king of San Francisco DJ culture until ITF championships and technical prowess replaced tastefully blended grooves at the turn of the century. Still actively hunting for the next great beat, Farina has since been all over the world, from Acapulco to Ibiza, and recently released Fabric 40, a stellar mix from London’s famed Fabric club. He rocks the decks as part of the weekly Juke Joint series on Thursday, Dec. 3, at the Hopmonk Tavern. 230 Petaluma Ave., Sebastopol. 9pm. $15. 707.829.7300.