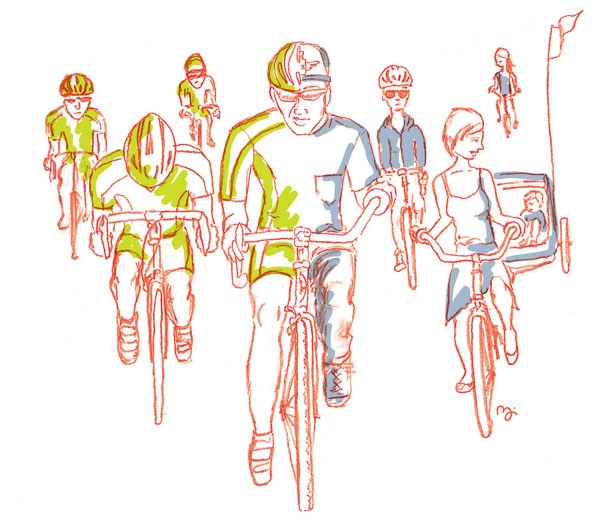 Blink and You’ll Miss It

The Tour of California returns to Santa Rosa

Bike Mania
Events leading up to Sunday’s Tour of California

Will Levi Ride?
All signs point to yes, at least for Stage One

What eight-legged creature is born in Santa Rosa and dies in Hollywood seven days later? Why, the Tour of California, of course!

Santa Rosa hosts the first leg of the Amgen Tour of California on Sunday, May 13, beginning at 10:50am on Santa Rosa Avenue at Third Street. Several streets will be closed in advance of the race, which is a good idea considering the critical-mass-like swarm of 136 riders who’ll be vying for the yellow jersey.

The tour began in 2006, and Santa Rosa has played a major part almost every year since. After a hiatus from Santa Rosa in last year’s tour, the historic town with a deep cycling history is back as the host of the opening stage of the race. With the prestige the TOC is gaining—many call it America’s premier bike race—Santa Rosa has been getting a reputation as a cyclist’s paradise. But has it been one all along, and it just took a corporate-sponsored race to bring it to the world’s attention?

Before there was the Amgen Tour of California, there was the Coors Classic. Yes, the Rocky Mountain refreshment that is Coors sponsored a bike race, the largest in the country, actually, in the 1980s. This may seem as ironic as a cell phone company sponsoring an automobile race, but Colorado, specifically Boulder, was cycling mecca at the time, and there seems to be a thing with bikes and beer. (New Belgium Brewery would concur.)

The race eventually added a Santa Rosa leg, starting and finishing in downtown, on D Street. There were about 2,000 people on hand to watch the race in 1988, but that was the height of the tour’s expansion. The Coors Classic folded in 1989 when, apparently, the bike-racing population realized that two hours of riding only burned about three beers’ worth of calories.

The tour lives on, however, in spirit. Levi’s Granfondo, a fundraising ride for the TOC’s Santa Rosa leg and other causes, led by Santa Rosa’s most famous cyclist, Levi Leipheimer, roughly traces the 1988 Coors Classic route.

This coming weekend, riders will use polycarbon, molecularly enhanced, feather-light frames and silicon-coated racing jerseys to their advantage in the Amgen Tour of California’s opening leg in Santa Rosa. They’ll ride in a 115.9-mile loop up hills, down the scenic coastline, finishing in front of tens of thousands of cheering fans downtown.

The ride will head through Windsor, then south through picturesque vineyards and into Graton and Occidental. Then it’s north along the Bohemian Highway to Cazadero, where the incline reverses and saltwater sprays slicken the surfaces for speeding cyclists to the twisty incline of Coleman Valley Road, where one can still make out spraypainted declarations of “Cozza Cozza Cozza” on the asphalt from tours past.

And after it’s all over? Head to the parking lot on Third and E, across from the post office, where team buses park in wait for competitors at the end of the race. If you’re lucky, you’ll get to see and even talk to some of the riders.

When to Be There

King of the Mountain Sites:

Fact: The average age of riders on this world No. 1-ranked team is 27, but it’s anchored by the 38-year-old, three-time TOC champ Levi Leipheimer.

Fact: The 2011 King of the Mountain team took first place in six UCI races last year and has made a strong finish at the TOC a primary goal for this year.

Fact: This team is stacked with ringers and headquartered in Santa Rosa, so it’s a good bet the riders are familiar with the route.

Fact: This rookie team on the world tour is the first Aussie team to crack top ranks of pro cycling. Veteran rider Robbie McEwen will go for a win in the final race of his career.

You Talk Pretty One Day

Cycling, like any other sport, has its own vernacular. For the casual fan, a few definitions might help. The peloton is the pace-setting bunch of riders just behind the leaders and ahead of the stragglers. A domestique is a team member whose dedication is to helping the team leader. There’s one designated “star” on the team, and the job of the other team members is to help him win, for the good of the team. To bonk means a rider’s body is giving out, probably due to lack of caloric intake. And a broom wagon is sort of like the Zamboni of bike racing—it comes out when the action’s done and gives the all-clear to reopen the road.

Guy Fieri Afraid of the Pit?