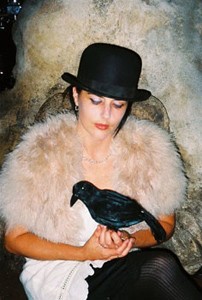 Of a Feather: Kirana Peyton is Black Bird Stitches.

A Stitch in Time

Black Bird Stitches’ primeval torch songs could burn down a barn. They crawl along at an intimate pace, sticky and sultry with the detritus of everyday life and longing. These are not torch songs of knuckle-biting, physical yearning, but of something deeper and darker and more mysterious, their ghost narrators yellowing with age and fettered by quietly powerful nostalgia.

“I love the effect of time,” says Kirana Peyton, the chanteuse and multi-instrumentalist who performs as Black Bird Stitches. “To me it creates that feeling of the timelessness, the infinite within the finite.” The characters that populate Peyton’s songs on Black Bird Stitches’ eponymous debut album exist in such spaces, where a moment spans eons and a decade streaks by in a flash.

“At the time that I made the [album], I was very much in my cocoon,” Peyton says of the songs she recorded with bassist, engineer and co-producer Paul Lamb over the course of a year. “And that’s what that record is for, for people who need to be in a cocoon. It’s quiet and introspective, then kind of thrashing around in your room for a couple tracks there.”

The quick-pulsed “Moon Cracked Open” is one such empowering tantrum-song; it surges up from the ground, steeped in delirious vengeance (“I keep a little lightening in my pocket when in need / I got dirt under my nails and a lion up my sleeve / The moon cracked open with a body boom sound / Down came the dream of her pouring to the ground”). But Peyton also delivers creaky, cryptic moments that hiss like a snake, and sordid tales of broken lives sung in a bluesy howl. It’s a CD best listened to without interruption, in the company of nothing but your imagination.

Peyton, who lives in Sebastopol, has a strong résumé of music projects in the North Bay, notably Majesty’s Monkey, a startlingly original group that Peyton fronted with Jesca Hoop. Working with producer Yarrow Mahko, they infused elements of spoken word, found sound and performance art into intense, highly personalized minimalist folk. Majesty’s Monkey disbanded several years ago, but Peyton still performs with her other band, the Celtic-influenced Spiral Bound, as a vocalist and percussionist.

Those who caught one of Majesty’s Monkey’s quietly electrifying live shows will recognize many of their defining qualities in Black Bird Stitches, but with a more finely tuned focus on theatricality and storytelling through sound. A highly expressive vocalist, Peyton constructs layers of tension by getting sneaky with her pipes, cooing softly at one moment, swooping into a gospel-driven wail the next and punctuating it all with a sly, diabolical laugh. The songs’ typically sparse instrumentation serves as a powerful backwash that penetrates the narration.

In the suave and spare “Caw Lady Coo” from Black Bird Stitches, Peyton bends her voice to evoke not a cooing crow, but a muted trumpet emulating a cooing crow, an extra layer of imitation that makes the vocal effect all the more convincing. She also weaves everyday sounds into her music, recently incorporating an old-fashioned hand-cranked coffee grinder in a song she calls “Daily Grind.” “I consider the story, what’s happening in the story and try to create sounds that support the story,” she says.

Black Bird Stitches has been playing more shows in the past few months, affording the audience the pleasure of witnessing the project’s live version come into its own. Meanwhile, Peyton and Lamb have been recording a new batch of songs. “This next [album] is a little more upbeat. The newer songs have been mostly recorded in this old farmhouse that I’m living in–the environment definitely comes through.” Peyton’s exposure to bluegrass music at festivals she attended with her family while growing up in Indiana also comes through. The spirit of the newer songs is cozier, the instrumentation is fuller and the feel is that of slipping into a group of friends jamming on a circle of hay bails.

“I try to stay open to what’s coming to me from the world, and sometimes things just bubble up from inside,” says Peyton. “It’s almost impossible to not fully put yourself out there, outside of your little bubble. The more I get to understand myself and the world around me, the vaster a reservoir there is to draw from.”

Black Bird Stitches perform at Sebastopol’s Masonic Center on Thursday, July 21, at a benefit for Jeanine Parvarti and on Saturday, July 23, at the Ace in the Hole Cider Pub in Sebastopol. Both shows at 7pm. www.blackbirdstitches.com.