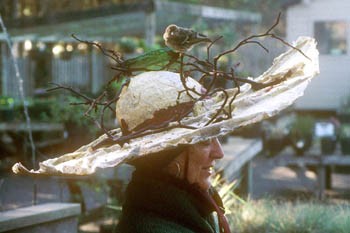 Flock Together: Environmental artist Erica Fielder, and friend, in one of her bird-friendly art hats.

A Bird on the Head

Erica Fielder talks a lot about watersheds. The way she sees it, people would feel more protective of one another and the species in their vicinity if they thought about the source of the water in their watershed. Watersheds sustain every culture around the world, yet most people don’t even know the name of “their” river or the source of the water in their watershed. This got Fielder thinking about interspecies connections, and from there, it was only a short hop, skip and a jump to making birdfeeder hats.

The biggest dilemma for Fielder, 58, has long been which hat to wear herself, that of the artist or the environmental educator. She has always been active in education, and spent 18 years teaching children about the natural world. But she is also a painter and sculptor with an advanced fine arts degree; the divide between those two worlds perplexed her. Two years ago, she applied for and received an $11,000 grant that enabled her to expand her vision of narrowing this divide through the very physical action of crafting hats that feed birds.

At first her hats were placed among ordinary birdfeeders to get the hungry avians used to the idea. Gradually, the feeders were taken away and the birds ate off the hats. Then, to Fielder’s delight, she was able to don one of the hats and sit very still, and after only a half hour, birds began to roost on her brim and peck at the irresistible food she had placed there.

“I wanted to take people out of the voyeuristic role of watching birds through binoculars or sunsets through a car window or nature shows on TV, and put the human back in the picture,” she says by phone from her home north of Fort Bragg.

The hat is also a way of getting our species to slow down and be aware of another species, something Americans aren’t very good at,” Fielder says. “I wanted the wearer to have a sensory experience, because those are the ones we most remember. When the bird lands, it’s quite an experience. I’m always amazed when I hear what feels like a big bird land and someone watching tells me it’s a chickadee. The hat is like a drum, really, you sit there and you can hear the birds chatter as they eat, little conversations and their talons make tappy noises. The best part is that it gets people to sit very quietly, to be patient, which is a huge contribution.”

The hats themselves are not widely available. As they are individual works of art, Fielder charges between $250 and $300 per hat. Each piece takes her at least eight hours to make. She blows up a balloon and takes the measurement of the customer’s head before wrapping the balloon with papier-mâché. The brims are often three feet in diameter and reinforced with small bamboo skewers so they’re good and sturdy, broad enough, at first, for Fielder to hide under. When the newspaper strips dry, she pops the balloon and uses ribbon so the hat can be secured under the chin.

Fielder uses different colors to adorn the hats and affixes in the branches small seed trays she purchases at a thrift store. She will even place hummingbird feeders on top. “How tolerant birds are to humans is directly related to how fast they can get away, so the hummers are the most bold, and the smaller birds next,” she says.

Since bird watching is second only to gardening as a pastime in the United States, people seem to crave the interspecies connection that most interests Fielder as an artist; her hats offers a crucial sense of immediacy. “I am after that sensory memory, that sense of ‘Ah-ha!’ when they feel the connection,” she explains.

“Once we have a connection with one species and begin to care about them, we will hopefully become more protective of the watershed that those birds, and we, inhabit.”