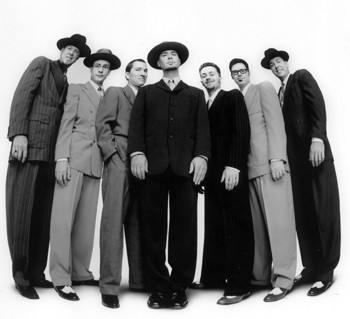 Flannel-clad fans of grunge and alternative rock were more than a little perplexed by the swing-era nostalgia of Big Bad Voodoo Daddy when that band emerged in 1992 with zoot suits, Rat Pack lingo, and a satchel of ’40s and ’50s swing charts. As one of the first bands to ride the wave of retrolounge and neoswing party music, Big Bad Voodoo Daddy got a solid boost in 1996 when Miramax released Swingers, an indie comedy that featured Jon Favreau and Vince Vaughn as a couple of likable hipsters on the prowl. The film also featured Big Bad Voodoo Daddy, the only neoswing band in sight, performing two songs in the movie, “You and Me and the Bottle Makes 3 Tonight (Baby)” and “Go Daddy-O.”

Suddenly what had begun as a kitschy underground dance scene moved mainstream, bolstered by the film’s success and crossover hits by the Squirrel Nut Zippers and the Cherry Poppin’ Daddies. Big Bad Voodoo Daddy stepped to the front of the pack, got signed to a major label (their 1999 album This Beautiful Life sold three million copies), and performed for a billion TV viewers, along with Stevie Wonder and Gloria Estefan, as part of the Superbowl XXXIII half-time show.

Before you could say “big-time operator,” the ‘burbs became the burgeoning home to a new generation of swing kids mimicking their grandparents’ dance steps and wearing vintage clothing.

But that fad couldn’t last forever.

Save My Soul, the band’s new CD, finds Big Bad Voodoo Daddy–who perform next week in Petaluma–taking a detour through the funk-drenched sounds of New Orleans. Trumpet and coronet player Glen “the Kid” Marhevka says that transition is only natural, since the band became reinvigorated a couple of years ago after performing at the New Orleans Jazzfest, riding to glory on a Mardi Gras float, and making frequent appearances at the local House of Blues.

“We’ve traveled there a lot over the past decade and have been very inspired by the city and its musicians,” says Marhevka, during a break from rehearsals with the Calgary Philharmonic Orchestra (the band has performed a half dozen symphonic shows). “So it just seemed natural to do some new songs that were influenced by what we get out of being in that city.”

But that doesn’t mean that Big Bad Voodoo Daddy have abandoned their roots. Hardly. “We’ve incorporated about a half dozen of these new songs into our live shows,” Marhevka explains. “It’s certainly not a departure from what we’ve been doing in the past. The swing style still dominates and you can dance to it just the same.”

Still, it’s evident that the band has made a decision to stay loose in the face of the fading fad that first carried them into the spotlight. “We’ve always just done our own thing and moved forward as a band, figuring out the next logical step,” Marhevka concludes. “We were doing what we’re still doing back in ’92 before there was any kind of swing fad, and we’re still doing it. People appreciate that.

“We’re staying true to what Big Bad Voodoo Daddy is, and that commands respect from people. By expanding and showing our influences, we’re showing our core. We’re not trying to calculate our next move. We’re just trying to do what feels right for our band.”