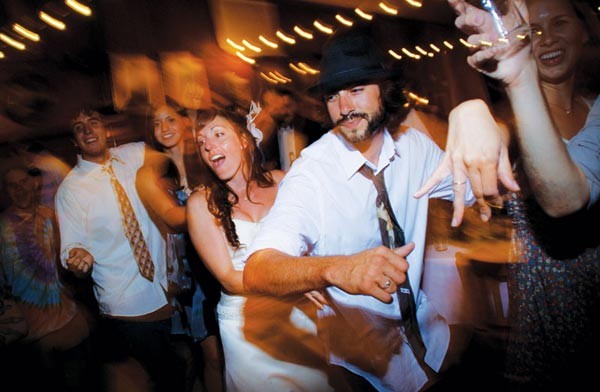 According to Barbara Gonnella, the Union Hotel in Occidental should have a “romance wall.” Since 1925, when her husband’s family bought the restaurant and saloon, couples have been journeying there to tie the knot—or at least ready the rope. “People come in and say, ‘We had our first date here 30 years ago,'” she says. “It happens all the time.”

The hotel is still a popular marriage spot, especially for destination weddings. With lodging, a pizzeria, ballroom, dining room, bakery and saloon, there’s something for everyone, Barbara says. Plus, the bakery opens before 7am and the saloon doesn’t close until 2am, so the notion of partying from dusk ’til dawn isn’t too far out of reach.

The Union Hotel has a backstory steeped in small-town love. The first of the Gonnella line in Occidental, Carlo Panizzera, was a former cowboy who fell for one of his waitresses. On a 1920s morning, Mary Alberigi was carrying laundry when she tripped and fell down the hotel’s narrow stairwell. Panizzera came to her aid and carried her to the local doctor, and instead of filing for workman’s comp, she married him.

The two had one daughter, Lucille, who married Dan, the first Gonnella. In an old black-and-white photo on the restaurant’s site, a teenage Lucille leans against a kitchen table in a checkered apron.

According to an article by Barbara’s daughter Gienna, the restaurant’s original chef, her great-grandmother Mary, had an unusual but highly effective marketing strategy. “[E]very time she drove to San Francisco (in her big Cadillac!), she would stop at saloons along the way and buy ‘the house’ a drink. She would invite everyone to Occidental to visit the Union Hotel, and most of them came.”

Best Proposal in the Cellars

Founded by the Davies Family in 1965, Schramsberg Vineyards gained fame when its sparkling was served during Nixon’s trip to China. “Nixon” and “romantic” rarely coexist in the same paragraph, but Schramsberg’s hand-hewn historic cellars, draped with diaphanous black lichen, make for an irresistibly romantic setting. The winery tour ends in a candlelit antechamber, where the guide demonstrates how to cradle a bottle in one’s arms, cushioned with a towel, and, instead of rushing to pop the cork, “make it sigh.” Over the years, some dozen would-be grooms have popped the question in the caves. One had “Cheryl, will you marry me?” etched onto a bottle; another arranged for a private moment after the tour, but there was a problem from the very beginning: the poor fellow was sweating like Nixon under klieg lights. He only made it as far as the riddling room, where he broke down, dropped on his knee and proposed in front of the whole group. Thus far, only “yes” has echoed in these caves. 1400 Schramsberg Road, Calistoga. 707.942.4558.—J.K.

Best Oldest Retail in the County

“Eighteen seventy-nine, I remember it well,” jokes Doug Van Dyke, owner of E.R. Sawyer Jewelers. And though he wasn’t alive in Elbert Ransom Sawyer’s day, Van Dyke knows what the former Nebraska native sold in those early days: watches and wedding rings, mostly. Nothing much fancier. “We’re talking about this being very much a farm town,” Van Dyke explains. As far as records show, E.R. Sawyer is not only the oldest retail establishment in Sonoma County, it’s also been open every single scheduled work day, save for one, on April 18, 1906. The day after the great quake, Sawyer was open again, selling out of his house. Sawyer also helped found the first Chamber of Commerce, the first bicycle club and was invested in the community, a tradition Van Dyke and his wife, Ame, carry on today. The shop itself now sells and repairs luxury jewelry for both local residents and “famous dignitary customers” whose privacy Van Dyke is inclined to respect. But if you’re looking for a watch or a good old-fashioned wedding ring? Never fear—E.R. Sawyer still carries them, 133 years later. 638 Fourth St., Santa Rosa. 707.546.0372.—G.M.

Best Place to Share Spaghetti, ‘Lady and the Tramp’–Style

True story: Tina and Willie road-tripped from UC Davis to the coast, their first real date. After spending the foggy weekend in sandy sleeping bags, the cold, starving students sought some warmth and sustenance. Wandering into Valley Ford, the old-timey coziness of Dinucci’s Italian Restaurant beckoned. Having barely any money, Willie and Tina got one order of minestrone soup and shared the refillable bowl. They made a meal of it by stocking up on the limitless Parmesan cheese and crusty sourdough bread. Dinucci’s was built in 1908 as the Depot Hotel for travelers on the Northwestern Pacific railroad; the Wagner family has run the restaurant since 1968, and still serves many of the original Italian dishes, family-style. “When you’re 21 and in love, it’s the bomb,” says Willie, now married to Tina for 38 years. “We always come back, but now we can afford the spaghetti.” 14485 Valley Ford Road, Valley Ford. 707.876.3260.—S.D.

The Olema Inn wasn’t always a cushy bed-and-breakfast with fresh croissants and Ralph Lauren linens. Founded in 1876, it was once a saloon where loggers, ranchers and farmers gathered in a town rowdy with taverns, brothels and gambling. The property where the inn sits today was acquired by the Garcia family through a Mexican land grant, until they sold it to stagecoach owner John Nelson, whose family ran it for three generations. In 1998, Dana and Jennifer Sulprizio bought and restored the inn and installed a 100-year-old pine floor imported from a 19th-century tobacco warehouse in Virginia. With the former saloon’s rich history and current luxury, it’s no wonder you picked the Olema Inn as Best Staycation in Marin. 10000 Sir Francis Drake Blvd., Olema. 415.663.9559.—R.D.

Previous ArticleJudi Bari, the FBI, and the Press Democrat: Reporter Mike Geniella on an Unsolved Case

Next ArticleAcross the Bridge: March 21 – 28