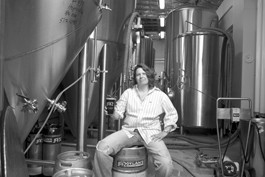 Moylan's brewmaster Denise Jones is committed to the cause

T he best brewer of beer does not necessarily leave his trademark upon the product. To the contrary, he may be a humble man and a servant to cherished styles. A seamless transition as a new beer man takes over for an old at a neighborhood brewpub is among the strongest testimonies there is to a brewer’s understanding of his science and mastery of his craft.

Just a handful of women in the Bay Area and a scant dozen in the United States brew beer professionally, and Moylan’s Brewing Company in Novato has one of them, though Denise Jones doesn’t dwell on the novelty of it all.

“I don’t think people look at me, taste my beer and say, ‘That’s pretty good for a woman,'” she says. “Beer is really about the beer.”

Moylan’s was founded 19 years ago, in which time customers have come to know, expect and enjoy its list of familiar ales. So when owner Brendan Moylan hired Jones in October of 2006, he was not looking for an overhaul of the beer list; on the wet end of the tap, it’s still just business as usual.

“It wasn’t my job to come walking into Moylan’s and make sweeping changes to the beer or even leave my signature on the beer,” Jones, 43, says. “My job was just to tighten up a few loose ends, increase the balance here and there, and increase the shelf life for the bottled beers.”

Moylan’s has seen a growth in its bottled-beer program as the brewery gains renown across the country. The beer is distributed to 15 states, and Jones calls the long and winding road of national distribution the “beer torture chamber.” It must travel from tank to filter to bottle to truck and, finally, to retailers across the nation, where poor staff handling and balmy stockrooms can potentially damage the product, if transport hasn’t already.

Meanwhile, Jones feels beer is best served on draft over the counter, when it’s just days or weeks old, an unusual philosophy in the midst of so much buzz over barrel-aging, vertical vintage tastings and ancient ales pulled from the cellar. But Jones grew up on fresh beer. She learned to brew in brewpubs and was never even a home brewer, which is the way that many, if not most, brewers begin.

She has almost always made beer to be served onsite, moving the majority of the product from tank to keg to glass, all within 30 feet and two weeks of its point of origin. Jones enjoys this close relationship between brewer and buyer, as she receives immediate feedback, criticism, praise and questions.

Yet she remains behind the scenes most of the time, brewing beer without end. In fact, to compare the art of winemaking, the Bay Area’s other specialty in artisan beverage making, to that of brewing paints a telling picture. Winemaking is a vintage activity that arrives each fall in a flurry of mild panic. Brewing, on the other hand, is a steady, repetitive effort that occupies a professional day in and day out, much like a chef’s.

Which isn’t so unusual. In merry olde England, beer was considered “women’s work,” something done in the kitchen to feed the men. Asked why not many women helm the kegs today, Jones considers. “I think it’s always been an engineering-type job, and more men are usually engineers than women,” she says. “It also requires physical strength—muscular strength—and that’s usually men. In the latter part of history, men have just been the brewers, but I never approached it as a man’s job. I just approached it as a function of creativity, and for that I really enjoy it.”

Good thing, because last year, over a thousand barrels of beer were served across Moylan’s bar.

Jones says that the greatest challenge of beer-making, especially for familiar locals, is meeting the demand for consistency.

“Brewers must diligently watch the beer, and it has to taste exactly the same each time you put a new batch on the shelf, whereas the winemaker will say that 1997 tasted like this and 1999 was a little more of that. Winemakers say nature gives them a different product each year, but nature gives us different products, too. It’s shifting sands with barley, and it’s shifting sands with hops.”

Drinking the stuff is easier, though caution is advised when tipping back some of Moylan’s whoppers like the Hopsickle Imperial Ale, a triple IPA. Buffed up to over 9 percent alcohol by volume, it’s a tempest of flowery aromas, caramel in the mouth and stinging alpha acids. The imperial stout goes 10 percent and bubbles with black fudge, smoky dark chocolate and peanut butter. The Old Blarney Barleywine is just as strong, a deep dark brown, and layered with caramel, butterscotch and candy flavors. And there’s the 8 percent Kilt Lifter, a sweet Scotch ale that blends the nutty flavors of wild rice, rye, wheat and corn. On the lighter side are the Dry Irish Stout, the Tipperary Pale Ale and the fruity, red Wheat Berry. A dozen or more beers are available on draft at any time.

Yet some 70 percent of the brewpub’s forecasted 4,000-odd barrels of beer will be shipped outward to 15 states this year. With national distribution comes national acclaim, and Jones is getting it. She has won nearly 20 awards since arriving at Moylan’s 18 months ago, and among the nationwide fraternity of craft brewers, Jones is becoming an increasingly recognized name and face who has taken several medals at the Great American Beer Festival.

Jones attended the American Brewers Guild in Davis, received her master of styles degree in Chicago, studied in Munich, has attended national and international beer and wine conferences and has received training in sensory analysis. Still, she’s not done.

“Constantly learning is really important to me,” she says. “I will not be complacent in my craft.”

She calls her job a “highly worthy career,” made interesting by the daily challenges, the customers, the feedback, the balancing of art and science, and her team of assistants.

“It’s a job. It’s a career. It’s something I have passion for. There’s plenty of room for women out there in brewing. I’d encourage anyone—if you’re a man or a woman, young or old—to go into brewing if that’s what you like. Maybe it’s a blinded, sexist attitude, but I belong to one of the most fraternal orders of people, and I really don’t think I encounter sexism among brewers.”