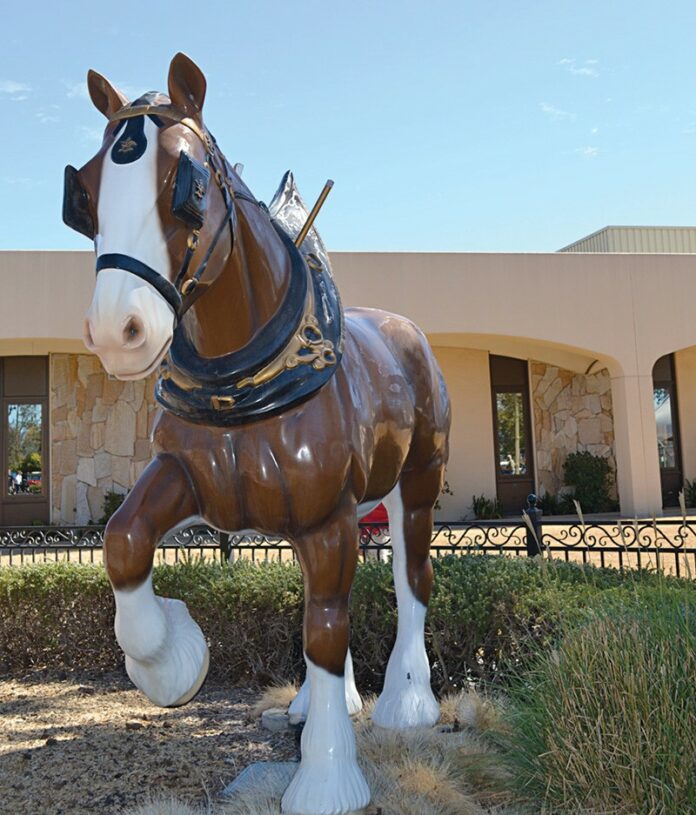 Smelling like a brewery is something that happens when you roll out of a bar, not a brewery. At least, that’s the case when touring the Anheuser-Busch plant on Interstate 80 in Fairfield, a hulking, beige landmark that’s been there since 1976.

Curious about what goes on there? Me neither. But it was a top priority for a friend of mine who talked me into this expedition. The factory that emits Budweiser had captured his imagination Willy Wonka–style. Here was a chance to taste his beer of choice in its freshest form—direct from the tank, if at all possible.

The basic tour ($5) kicks off with a 30-minute history lesson in a room that’s furnished much like a middle school classroom, except for the bar. Normally, we’d get our first samples of beer here, too, but for some reason having to do with the concurrent Bud Classic car show, we go dry until the end of the tour.

After our tour guide brings us up to date on Budweiser, created in 1876 by German immigrant Adolphus Busch specifically as a national beer brand, she quizzes the group on which Roosevelt ended Prohibition. Someone offers Teddy, but I hold my tongue: sure enough, the person with the right answer gets a good-natured ribbing from the boys in the back of the room: “Took you long enough, teacher!”

In the aging room, two rows of 20 horizontal tanks face off. As cold as the deep sea, and looking as long as submarines, each tank holds the equivalent of a half million 12-ounce beers—and there are several identical floors above our heads. But this brewery is just “a pub” compared to the St. Louis plant, says the retired employee assisting the tour guide in sweeping up stragglers and providing us the insider info. For souvenirs, we get a small glass and a rough strip of beechwood. The wood, loaded into the tanks in perforated, stainless steel torpedoes, adds no flavor—it’s a 19th-century technique for ensuring a complete fermentation from the yeast.

We file past stacks of cans and view a bottling line from a distance, and that’s it. No steaming kettles, no bubbling wort, no beer from a tank. The Beermaster Tour ($35) at 10am and 2pm offers a peek into the brew house. But we get fresh Bud in the comfortably furnished tasting room: the kegged beer is not pasteurized. Outside, wisps of steam escape above the massive Budweiser sign, and a malty aroma wafts across a scene of pure Americana, a classic car show and a flea market. Ah, it smells like a brewery out here.