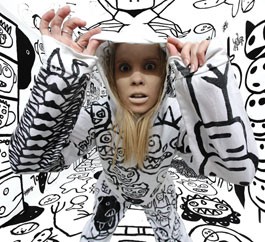 Beats on the Bay

Treasure Island Fest still one of the best

Outdoor music festivals are like giant, overwhelming coastal waves pummeling crowds with long lines, too many stages, treacherous parking and ugly corporate sponsorship. Then there’s the Treasure Island Music Festival, set smack in the middle of the San Francisco Bay. Attendees park for free in the city, at AT&T Park. There, everyone rides public transit to Treasure Island. There are only two stages with no overlap, food lines are short and quick, and instead of tents sponsored by Toyota, Intel, Chase or Sony, there’s interactive art and music booths hosted by crafty area artists.

Most importantly, Treasure Island attracts the cream of the indie crop and conveniently separates their lineup. Saturday’s lineup features more electronic-based acts, with this year’s headliner LCD Soundsystem touring on what’s shaping up as 2010’s best album, This Is Happening. And along with house-music flavor-of-the-month Deadmau5, chillout icons Kruder & Dorfmeister, Brooklyn rioters !!! and slick pop duo Miike Snow, Saturday welcomes South African internet sensations Die Antwoord (above), who, despite being debunked as out-of-work actors pulling the Borat of all hip-hop jokes, play their white-trash roles alarmingly and amusingly well.

Sunday sees Scottish twee-pop legends Belle and Sebastian on the headlining stage above the Brooklyn barintone balladry of the National, Zooey Deschanel’s pet project with M. Ward She & Him, the made-for-festivals juggernaut of Broken Social Scene and the welcome return of Superchunk, whose members recently took a break from running the world’s currently most successful indie label, Merge Records, to release an album that defines the phrase “return to form,” Majesty Shredding. Playing earlier in the day is Monotonix, from Israel, who routinely destroy the wall between band and audience, and often wind up outside the club, on top of cars, in the street, still playing. Look for them mid-set, performing from the top of the Ferris wheel.

My Lambo Is Hot